My mother’s ghostly snickering haunted me as I puzzled in Italian over the daunting passato remoto, the remote past tense for things that happened long ago.

This was payback for things that happened long ago.

I was learning Italian because my first book had been published in Italy and I was invited to a prestigious international book festival in Mantova. I wanted to read from the chapter describing the famous procession called “La Madonna che scappa” (the running Madonna), an Easter resurrection pageant that is really about the reunion of a grieving mother with the son she thought she’d lost forever.

Six men carry the Madonna Addolorata on a bier, draped in black. Suddenly the mother “sees” the risen Christ across the Piazza Garibaldi and the men run with her to meet her son. Her black robes fly off and under her mourning clothes, the Madonna wears green to signify hope. 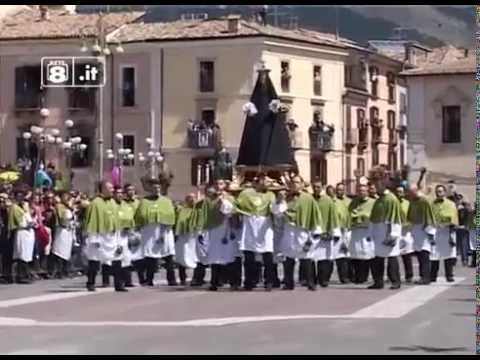 My Italian mother spoke of this procession with the wonder of a child. When I saw it, a year after my own son had died, I was too stunned by grief to feel wonder. In my book, I described the power of its iconography, but I wrote from the point of view of an outsider to this culture that could so accurately personify grief. For the Festa della Letteratura, I wanted to read my book in my mother’s language.

But during my stormy adolescence, I honed my tongue on my mother’s fumbles with the English language until it became sharper than a serpent’s tooth. I was humiliated by her accent, ashamed of how tongue-tied and cringing she became with anyone official. I was mortified by the fact that she wasn’t American.

My Italian mother spoke of this procession with the wonder of a child. When I saw it, a year after my own son had died, I was too stunned by grief to feel wonder.

Ma’s Italian sounded low and guttural, and her dialect severed words, clacking over them like a knife chopping garlic. Her speech was a harsh and ugly assault as we battled hopelessly, roles reversed, my mother muttering remarks under her breath like a sullen teenager, I speaking tri-syllabic words I knew she couldn’t understand in fake upper-class fluty tones, the way I thought real Americans spoke. All the television sitcom moms I dreamed were mine warbled in a register an octave higher than my mother’s throaty voice. When my mother spoke my name, she tainted it with her foreign pronunciation, stealing my wobbly, uncertain place in my own culture. I called my mother “mom” instead of “mamma” in my desperation to sound like my classmates. I hid my mother from my teachers as if she were Mrs. Rochester, locked in the attic.

Like the Running Madonna, my mother was no stranger to grief. Widowed at the age of 43, she had three children, few marketable skills and a tenuous grasp of the English language. When my father died, I was 15 and humiliated by what I then thought of as my mother’s excess of grief. I was American, I told myself. I wouldn’t wail like some Mediterranean cliché.

But unlike me, she understood the necessity of taking time, singing songs of lamentation, even cursing the gods. My mother howled, bereft, and then went on, raising us, making a living, eventually even finding joy. Meanwhile, I developed asthma, my father’s death settling on my chest like a stone. As she aged, my mother goaded death, mocking it to show she wasn’t afraid.

In my last lesson before my trip to Mantova, the app wanted me to translate: “Oggi sono pronto morire.” I could hear my mother’s signature bark of mocking laughter. “Today I am ready to die” could have been the epitaph for the woman who pointed at hearses and said, “Look-a, there’s my new car.”

Now I was attempting to read my first book aloud in the language that was the source of such shame to my younger self. And everything had changed. My mother’s tongue sounded so much truer in the reading voice inside my head, the words so much more dense and layered and palpable than the language in which I wrote the book that I could not say them aloud without weeping. Some wellspring had been triggered. In English, I could read aloud about my son’s death. In Italian, I could not.

In English, I could read aloud about my son’s death. In Italian, I could not.

In Mantova, I was able at last to give my mother back her voice. With the shame I felt as a child replaced by a love birthed in the empathy of my own loss, I read, in Italian, from the chapter describing the difficulties of mourning my son in an American culture that doesn’t recognize the existence of age or death.

Emotion clogging my throat, I was able to read before the crowd: “Torno di continuo in Italia perche e li che l’ho trovato.” But it wasn’t only my son I was able to find this time in Italy. It was mamma, not “mom,” that I invoked, in my own voice, as low as my mother’s once was.

Marianne Leone Cognoscenti contributorMarianne Leone is an actress, screenwriter and essayist. She is the author of "Jesse, A Mother's Story Of Grief And Everyday Bliss" and "Ma Speaks Up" is from Beacon Press.