The Roman Senator Seneca once wrote, “sometimes even to live is an act of courage.”

Few people would appreciate the truth of that statement more than the late Senator John McCain.

In 1967, McCain, then a 31-year-old navy pilot, was shot down over Vietnam. The force from his A-4 Skyhawk’s ejection seat broke his right leg and both arms, knocking him unconscious. He came to as he landed in a lake and escaped drowning only by managing to activate his life preserver with his teeth. The North Vietnamese soldiers who pulled him ashore shattered McCain’s right shoulder with the butt of a rifle and bayonetted him in the abdomen and foot before taking him to series of prison camps in which he would spend the next five years being tortured and refusing early release.

McCain, who died Saturday at 81 after a battle with brain cancer, was — like so many in his political generation — a product of Vietnam. Permanently disabled, the senator’s three-plus decade political career was inexorably influenced by his time as a prisoner of war and yet defined by an unshakeable faith in American exceptionalism.

One of McCain’s final heresies against the Republican establishment, his opposition to the nomination of Gina Haspel as CIA director for the interrogation techniques she oversaw during the Bush Administration, stemmed directly from his experience as a POW. “[Haspel’s] refusal to acknowledge torture’s immorality is disqualifying,” McCain said in a statement.

For the apostasy of speaking out against torture (a subject on which he could rightly claim to be the most qualified member of Congress to have an opinion) McCain was subjected to a deluge of indignities in the public square and behind closed doors. It is a telling commentary on how much the Republican Party has changed that the consistently conservative McCain was considered something of a maverick.

Like all politicians (or human beings for that matter) McCain’s legacy is mixed. Perhaps his signature legislative achievement, the McCain-Feingold campaign reform law, feels like a naïve relic of a bygone era in the age of Citizen’s United. His nomination of the glaringly unqualified Alaska Governor Sarah Palin to be his running mate in 2008 (a decision he later regretted) felt like a play to the basest elements of our national politics.

Along with the legacies of the majority of legislators from his time, McCain’s must contend with the blemish of the Iraq War. Unlike the leader of his own party, however, McCain had no illusions about combat. “War is wretched beyond description, and only a fool or a fraud could sentimentalize its cruel reality," he said in a 1999 speech to the American Red Cross.

McCain was no chickenhawk. The late senator was among the vanishingly small percentage of national politicians to have children in uniform. His son Jack is a navy helicopter pilot; his son Jimmy, a Marine; and his daughter-in-law Renee, an air force reservist. Though he never said it publically, matters of state were unavoidably personal to a man whose family literally had “skin in the game.”

Liberals and libertarians often derided McCain’s faith in the indispensability of American power and rightly pointed to him as a key member of the bipartisan cabal that involved the United States in so many ill-conceived overseas adventures. But McCain’s devotion to American exceptionalism was about more than a commitment to force of arms. His was tied to a belief that this country should endeavor to be worthy of its mantle of global leadership and he was quick to point out when he felt our leaders fell short.

I will most remember John McCain as a champion of norms and decency in our increasingly noxious political environment. At his best, he was a manifestation of our better angels, famously interrupting a bigoted rant from a woman at town hall on the 2008 campaign trail in defense of his opponent. 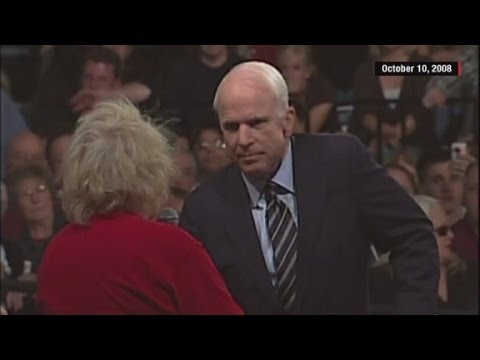 McCain’s final years will be remembered for his animus towards the Trump administration. In a time when the majority of his party stayed silent in the face of the president’s toxic rhetoric, McCain sparred with Trump over refugees, the treatment of gold star families,  and the ceaseless stream of falsehoods and attacks on the press that continue to pour out of Pennsylvania Avenue.

In some ways it feels disheartening to think that standing up for honesty in politics or the parents of a fallen American soldier should be so rare in a major American party that they warrant commendation. But in our particular political moment, McCain’s was an indispensable voice of dissent from the right. His moral courage should serve as an example for those in the party of Abraham Lincoln who still view America as an ideal to be defended rather than a vehicle for self-aggrandizement and profit.

We are asleep in our echo chambers, where our views are always affirmed and information that contradicts them is always fake.

With Sen. McCain’s death, the country has lost one of the most tireless advocates for its soul. But the words of a prophet always have more salience after he has passed. America would do well to heed those words in the coming years. In a speech to his alma mater in 2017, McCain warned the midshipmen at the U.S. Naval Academy:

“We are asleep in our echo chambers, where our views are always affirmed and information that contradicts them is always fake. We are asleep in our polarized politics, which exaggerates our differences, looks for scapegoats instead of answers, and insists we get all our way all the time from a system of government based on compromise, principled cooperation and restraint. It’s time to wake up.”