Amid the torrent of lies and childish tweets produced by this president, and the numerous criminal investigations into his alleged crimes, it can be easy to lose sight of other stories, especially those that involve this administration’s treatment of the powerless.

Powerless people, after all, don’t have the luxury of viewing our government as some tabloid spectacle that plays out nightly on basic cable. They wake up asking far more elemental questions. Such as: Can I keep myself and my children fed and clothed. Can I keep them safe?

These are the questions that have led thousands of men and women from Central America to travel north, often with their children, to seek asylum in the United States. The vast majority of these refugees are fleeing violence, which is hardly a surprise given the United States’ disastrous interventions in their homelands.

Regardless of how you feel about immigration, these refugees are not invaders. They are powerless human beings seeking safety and stability for themselves and their children. There is no other reason a mom or dad would force their children to leave home to embark on a dangerous 2,000-mile journey.

[Kirstjen Nielsen's] performance was among the most chilling spectacles of the Trump era.

The Trump administration, which came to power in part by promoting the racist myth that immigrants are inherently violent and dangerous, has chosen to arrest these parents at the border, and to take their children away — more than 2,700 last year.

These children, some as young as 18-months old, have been ordered into cages, smuggled to distant facilities in the dead of night, and abused by those charged with protecting them. Three have died in U.S. custody in the past year.

If a foreign government treated white American children in these ways, we would accuse that government of state-sponsored torture.

Yesterday, Kirstjen Nielsen, the secretary of the Department of Homeland Security, was forced to testify — under threat of subpoena — before a congressional committee.

Her performance was among the most chilling spectacles of the Trump era. It wasn’t just that Nielsen refused to answer basic questions about her department’s policy, or that she defended the demagogic lies spouted by the president she serves. That kind of negligence and kowtowing is a standard feature of Trump appointees.

What stood out was Nielsen’s robotic manner, her sheer bureaucratic heartlessness. Representative Lauren Underwood (D-IL), a former nurse, asked Nielsen a series of simple questions about the traumatic effects of removing children from their parents.

These were not trick questions. Underwood wanted to know if Nielsen had even the most rudimentary knowledge of how trauma affects children. She did not. 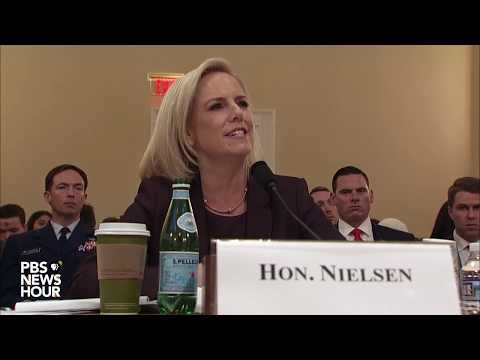 Asked about the cages in which children are detained, Nielsen simply denied that the chain-link enclosures clearly visible on television were cages.

Sir, they are not cages, they are areas of the border facility that are carved out for the safety and protection of those who remain there while they’re being processed.

Over and over again, legislators asked Nielsen to reckon with the effects of tearing young children away from their parents. Nielsen responded with the kind of bureaucratic doublespeak more commonly associated with fascist regimes — a rhetoric intended to eliminate the moral problem of her own conduct by dehumanizing the children her agency routinely traumatizes.

These were not children, after all. They were, according to Nielsen, “UACs,” which is short for “unaccompanied minors.”

Likewise, Nielsen recast the Trump administration’s conscious decision to separate families as a deterrent to asylum seekers as an unintended byproduct of its effort to take “operational control” of the border.

So rather than admitting that the United States government is tearing kids from their parents and throwing them in cages, we got Nielsen’s version: UACs, abandoned by felonious guardians, are placed in detention areas for their own safety. Her manner was so brazenly Orwellian that the one lawmaker finally lost her cool.

Again, whatever you think about the immigration issue, those who come to our border seeking asylum are human beings, most of them terrified and powerless.

That the official whose department is directly responsible for the suffering of thousands of migrant children cannot express any empathy for them, is a far more damning indictment of our country than any of the president’s alleged crimes or stupid tweets.

It is a failure that implicates us all. It’s a stain on our national conscience that we can only begin to erase by turning out of power those officials who refuse to see the powerless as fully human, and who therefore become inhuman themselves.