Face-to-face conversation is a basic human need. It’s how we learn to speak and think — how we form and maintain relationships. When practiced by consenting adults with courtesy and curiosity, it is one of life’s great pleasures. Conversation has been practiced and refined for centuries: from salon, to coffee house, to cocktail party, to vintage talk shows — before it became acceptable to broadcast a bunch of people simultaneously talking at each other, communicating nothing.

Pundits have proclaimed the art of conversation dead since the beginning of human speech, but it’s hard to banter, gab or chew the fat in the age of the Orange One.

After you’ve bragged about kids, gossiped about mutual acquaintances and wrapped up the organ recital, what’s left? Impeachment? Climate change? The Supreme Court? The clown-car parade of Democratic presidential candidates?

Just reading that list made you hang your head in silence, didn’t it?

Many people are equally informed about how to slay a dragon and how to bake a dacquoise, so I try not to judge.

So three cheers and thank God for television.

Yes, television. The one-eyed monster that’s been demonized as a threat to human interaction ever since those first tiny black-and-white screens colonized our living rooms.

Some of my friends still ask each other, “What are you reading?” But these days, the most successful opener for engaged and sustained conversation is, “What are you watching?”

Because most of us are watching TV for hundreds of very good reasons. America produced nearly 500 scripted shows last year, and that doesn’t count documentaries or the on-demand availability of older scripted shows, or our ever-increasing access to international programming. So. Many. Stories.

This embarrassment of riches is completely overwhelming, and so we turn to family and friends for guidance, recommendations and reviews and ask: “What are you watching?”

Then comes the sorting hat moment:

In one corner, the "Game of Thrones" people, who also tend to watch bloody police procedurals, of which there is an endless supply if you’re okay with subtitles.

The rest of us just can’t stomach close-ups of corpses and murderers, be they Vikings, cowboys or cops. Who can sleep after all that gore and suspense?

I know that a binary classification is unfair. Many people are equally informed about how to slay a dragon and how to bake a dacquoise, so I try not to judge. But when someone tells me she’s obsessed with the entire "Housewives of …" catalog, in my mind’s eye a cartoon bubble appears above my head: "Can we be friends if you’re into THAT?"

Whatever your favorites, when you locate a fellow fan, a flame is lit: What episode are you at? What do think of that character, that plot twist, the season ender? We parse meaning, message, character development and artistic and moral choices — with a passion.

Don’t get me started about "Call My Agent," a French comedy set in a Parisian talent agency with a client list of big-name actors (Juliet Binoche, Isabelle Huppert, Jean DuJardin) who appear as “themselves” in witty though not always flattering storylines. 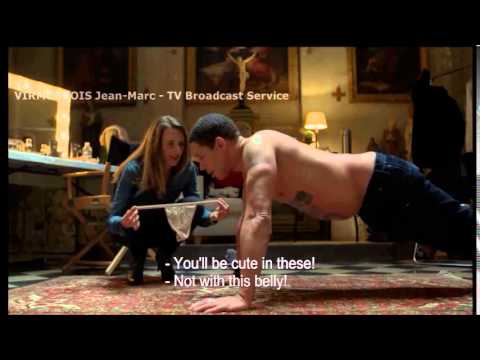 Movie stars aside, "Call My Agent" (original title "Dix Pour Cent" or "Ten Percent," the cut agents take from their clients) is a workplace-as-family show, populated by characters who are at least as neurotic as their clients. Because this is a French production, not all of the characters are classically beautiful. There are crooked teeth. There are wrinkles. People smoke cigarettes.

Andrea, one of the agents played by Camille Cottin, is a lesbian shark, ruthless in her dating life and at work. She is young and gorgeous, with a non-conforming nose that would be a total disqualifier on any American screen.

But because this is French TV, the nose is not a problem nor is it turned into a teachable moment about how we’re all beautiful in our own ways. When Andrea encounters her childhood nemesis, he whispers, “You changed your name, but not your nose.” She is stung but also vindicated; he remains the irredeemable jerk he was in grade school. And so he continues, until … watch and you’ll see.

The fourth and final season of "Call my Agent" can’t stream soon enough for me.

Anita Diamant Cognoscenti contributor
A Boston-based journalist and author, Anita Diamant has written 13 books, including the bestselling novels, "The Boston Girl" and "The Red Tent," which has been published in 25 countries and 20 languages.