For half of my childhood, I often cloaked my Jewish identity. I kept my Star of David necklace in my jewelry box rather than risk being outed as a Jew.

I experienced the pain of anti-Semitism and sticking out because I was the only Jew, other than my two brothers, from fourth grade through high school. When my family moved to Findlay, Ohio, from western New York state in the middle of the school year, I was the only fourth grader who left my class at Van Buren Elementary for 30 minutes once a week, rather than stay for a Christianity class taught by a church volunteer. She beseeched us to sing praise songs, including “Jesus Loves Me.”

My school was blatantly violating the separation of church and state, but my parents’ complaint simply got me excused from the religious class. The school superintendent told my parents that the school board supported the class; the board wanted every child to get Christian values. The message I received was clear: Being Christian was equal to being American in our school and town.

Being Christian was equal to being American in our school and town.

Some peers condemned me to hell because I didn’t believe in Jesus. One boy, during a high school history class, called me a kike, a Jewish slur. These encounters happened 40 years ago.  I have never lived with blinders on about the bigotry some people carry in their hearts toward non-Christians. Anti-Semitism and Islamophobia have also been on the rise in recent years.

But this week, I’m particularly enraged because President Trump is acting as if Jews are not full Americans, as if we are somehow less than. Trump entered anti-Semitic territory when he said to reporters, “I think any Jewish people that vote for a Democrat, I think it shows either a total lack of knowledge or great disloyalty.”

Trump did not make his statement about Jews randomly. He was responding to reporters’ queries about another controversy he created when he urged Israel to bar two Muslim congresswomen from an official visit to Israel. Both congresswomen have protested Israel’s policies towards Palestinians, and Trump’s comment about disloyalty inferred that Jews were being disloyal to Israel if they remained Democrats. By Trump’s reasoning, Jews should not side with Democrats, who have been supportive of the congresswomen’s right to visit Israel as elected officials. 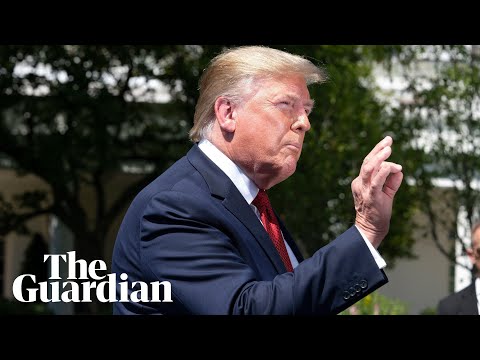 Once again, he’s making another stereotypical assumption — that Jews must all toe the same line when it comes to Israel.  While the majority of Jewish people tend to vote Democratic in presidential elections and feel a strong bond to Israel, they have been divided in their view of Trump’s handling of the Israeli-Palestinian conflict.  Around four in ten Jews, or 42%, believe Trump favors Israelis too much, while nearly the same proportion, 47%, say he has struck the right balance between the Israelis and Palestinians, according to an April 2019 Pew Research Center survey. Just 6% said Trump favored the Palestinians too much.

Part of me wanted to ignore Trump’s ludicrous remarks. He’s living up to expectations. He regularly breaks all types of social protocols, writing tweets and making comments that are racist and xenophobic. But if I were to ignore what the president of the United States says, aren’t I helping to normalize such behavior?

Saying Jews have to be loyal is a scary statement. It’s akin to Adolf Hitler’s rhetoric that Jews were destroying Germany’s economy. It has a McCarthy-era tone.

We can’t allow Trump’s words to simply be. That would be un-American.

His statement will rapidly become yesterday’s news, I’m sure. But this one for me is as tough to let go as the multitude of previous statements maligning other racial and ethnic groups in America. Trump has the country’s bully pulpit. He plays into the hands of racists and anti-Semites with many of his comments. Others become his echo chamber.

Jews are already reeling from shootings at two Jewish houses of worship; in both cases, the shooters were apparently motivated by anti-Semitism and white supremacism. One woman was killed by a shooter at the Chabad of Poway near San Diego in April, and 11 Jews were killed at the Tree of Life Synagogue in Pittsburgh last October.

Most of us must pass by a security guard or use a passcode to get into our houses of worship now. Many of us have had to reassure our children that they have nothing to fear despite the news of Jews being killed and increased reports of anti-Semitic graffiti. Now, we have to defend our very existence as Americans to our president.

Jewish or not, we need to speak up even though we feel like we’re shouting into the wind. We must make it clear that there is no such thing as a required political party based on one’s religion. And we must learn about other faiths, so we can fight hateful rhetoric with as much informed knowledge as we have.

We can’t allow Trump’s words to simply be. That would be un-American.

Linda K. Wertheimer Cognoscenti contributor
Linda K. Wertheimer is the author of "Faith Ed: Teaching About Religion In An Age of Intolerance" and has given talks around the country on the power of education to combat religious bigotry.