Like others, I dismiss certain gestures as “symbolic:” meaning merely for show. Yet it’s undeniable that some symbols scrape our nerve endings. The original American flag, representing for some our noblest aspirations and for others the era of slavery, provoked Colin Kaepernick into convincing Nike to keep its flag-emblazoned sneakers on the drawing board.

Others spar over the morality of flying the Confederacy’s flag and maintaining statues exalting Confederate leaders. And why do skinheads (or history-insensitive punks) deface synagogues with swastikas, other than to trigger outrage, or anti-Semitic applause, over memories of the Holocaust?

A recent court decision, buried in the avalanche of grim news about mass shootings, bolstered the case for mothballing that emblem of Trump-mania, the Make America Great Again cap, along with those symbols of evil.

U.S. District Judge William Bertelsman dismissed a libel suit by parents of a Catholic teenager against The Washington Post for its reporting of his January staredown with a Native American at the Lincoln Memorial. In the winter face-off that got more attention than its summer denouement, Nick Sandmann and Nathan Phillips stood nose-to-nose, the latter chanting and drumming, the former’s smirk beaming from beneath his MAGA cap.

Sandmann and fellow students from Covington Catholic High in Kentucky were in Washington for an anti-abortion rally. Extended video and Phillips’s testimony later suggested that members of the Black Hebrew Israelites, some of whom constitute a hate group, had taunted the students as “dogs” and "incest babies”; Phillips said he intervened to pacify the situation. 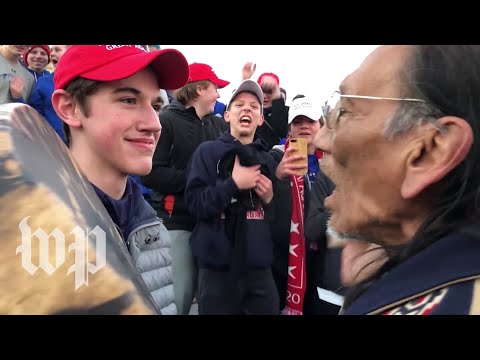 But Sandmann’s and other students’ MAGA caps bled anti-Trumpers’ sympathy for them, justifiably: Unless you’ve been marooned on the International Space Station, you know that Trumpism is racism, blatant or latent (here’s a summary of the voluminous evidence). That makes the cap no different than a Confederate flag. It’s racial animosity woven in cloth, unwearable without draping yourself in its political meaning. It would be like donning a swastika and expecting to be taken for a Quaker.

The court ruling reinforced the cap’s unsavoriness by reminding us of its defenders’ propensity to manufacture mythology about themselves. That’s done as well by those who display other symbols of hate and by our president himself, who has spewed almost 12,000 untruths or misleading statements during his tenure.

In Sandmann’s case, he alleged that the Post libeled him with no fewer than 33 statements, spread over seven articles and three tweets. The “gist” of one article, he claimed, was that he “assaulted” Phillips, “physically intimidated” him, and had “engaged in racist conduct.” But Bertelsman, a federal judge in Kentucky, would have none of it. “This is not supported by the plain language in the article, which states no such thing,” his 36-page ruling said.

Many of the allegedly defamatory comments either referred to the students as a group and not Sandmann specifically, the judge found, or else relayed Phillips’s feeling intimidated by the students. Even if his fears were groundless, Bertelsman wrote, they were opinions, to which Phillips is constitutionally entitled and which the Post is constitutionally protected to print.

The variance from reality that the judge found in Sandmann’s allegations reminds us of the bedtime stories concocted around other hate symbols as well. Defenders of the Confederate flag insist, in the words of one, that “it has nothing to do with slavery.” If such people had taken U.S. history, they would have learned that no less than the breakaway nation’s vice president declared its founding premise to be the inferiority and merited subjugation of African Americans.

Meanwhile, some argue for leaving Confederate statues up as monuments to history. In fact, they were erected not as history lessons but rather Jim Crow tributes honoring the Lost Cause. A museum is the appropriate place to display and study such bigotry, not the public square.

As for the swastika, it inspires defenses that would be risible but for the thing’s grisly history. Before the Nazis hijacked it, it was a millennia-old good luck symbol in multiple nations, incorporated even into synagogue designs. For reasons I don’t pretend to understand, some want to hopscotch backward over the association with six million slaughtered Jews to that less poisonous past.

Gas chambers, ovens and firing squads will do that to a symbol. Some things simply are beyond redemption.

The commonsense response came from a writer who said that even pro-swastika types “can’t seem to talk about the symbol without mentioning Hitler — perhaps proof that it is nearly impossible to divest a symbol of its meaning, even when its meanings are multiple.” Gas chambers, ovens and firing squads will do that to a symbol. Some things simply are beyond redemption.

That doesn’t include Nick Sandmann’s case, according to his parents, who vowed to appeal the judge’s decision. “I believe fighting for justice for my son and family is of vital national importance,” Sandmann's father said. “If what was done to Nicholas is not legally actionable, then no one is safe.”

I’ve no idea whether Sandmann Sr. is a Trump supporter. But hyperbolized dangers to national safety inhere in the outlook of the president and his base. (The “invasion” on our southern border, for example.) Coupled with Nick’s MAGA hat, the family’s grievances against the Post, deemed made-up by the judge, give this case a stench.

As a Catholic, I hope Covington’s teachers refer their students to the church’s teaching about the equality of all humans. It may have been overlooked by parents who should tell their children to take the caps off their heads and donate them to a museum.