For the past few days, our president — back at work after a busy August spent golfing and rage tweeting — has been making stuff up about Hurricane Dorian, the deadly storm currently battering the Southeast.

Late-night comedians have been roasting Donald Trump for his lies, including Seth Meyers, who aired a segment this week about Trump’s meteorological ignorance. 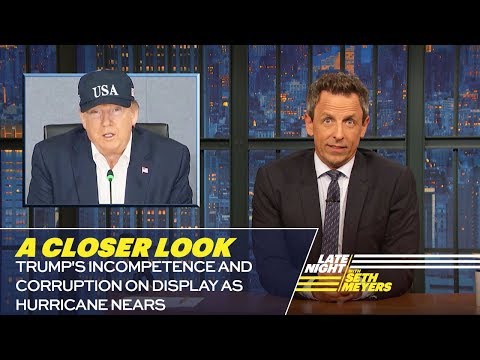 The segment is supposed to be funny, obviously. But as I watched Trump repeat the exact same phrase about various “Category 5” storms — sounding each time as if he was uttering this phrase for the first time — I felt a familiar sense of dread.

I remembered the same experience in dealing with my late mother, who struggled with cognitive decline for years before her death.

To be clear: nobody knows for sure if our sitting president is experiencing cognitive decline, which is why so many psychiatrists and mental health experts have called for him to be tested.

What I do know is that if you examine the Trump presidency through the lens of cognitive decline, some of its more bewildering aspects start to make a lot more sense.

Observers — particularly those troubled by the cruelty of his regime — tend to view Trump as lazy, incompetent, demagogic and mendacious. But it seems increasingly possible that the president’s behavior is also a function of his desperate attempts to mask serious cognitive struggles.

Anyone who has dealt with a friend or relative in cognitive decline can tell you that the person in question almost never admits to their struggles. Instead, they go to elaborate lengths to hide their impairment.

A person in cognitive decline -- whether Democrat or Republican -- shouldn’t control the nuclear codes.

Maybe the reason our president is reported to spend up to nine hours per day engaged in “unstructured executive time” isn’t just because he’s lazy. Maybe he’s trying to duck parts of the job he can’t handle. Maybe the reason he doesn’t read anything — including briefings — is because he can’t absorb or retain complex concepts.

Maybe the reason his unscripted speech is so often incoherent and littered with vagaries (relying on placeholder words such as  “thing” and “they”) is because he cannot summon the specific vocabulary he wants to use.

Maybe the reason Trump seeks out friendly media outlets and rallies is because he can only function in venues that feel safe and familiar, where no one will expose his struggles, where he can ramble and repeat the same slogans and stories and still receive applause.

In her own way, my own mother employed similar forms of subterfuge. She sought out familiar environments, and routines. As she struggled to track conversations, her responses became more confused and confusing. And the more cognitive function she lost, the more irritable and defensive she became.

Which brings us back to Trump and his increasingly defensive behavior.

What many of us don’t understand about cognitive struggles is the tremendous shame people feel. Particularly people — like Trump — who are in constant danger of being exposed.

Perhaps the reason he makes such a point of bragging about his big brain and his amazing memory is because he’s racked with doubts about both. Perhaps part of the reason his lies are so frequent and brazen — consider the whopper he told about why he skipped the climate change meeting at the G7 — is because he doesn’t have enough executive function to orchestrate his lies.

I say none of this lightly.

Trump is unfit for office based on his personal corruption, his disloyalty to the Constitution and his documented crimes.

All of these offenses are predicated on the notion that Trump is, in fact, in control of his faculties. But what if he isn’t?

That may sound like a partisan question, but it’s really a medical one. Simply put: a person in cognitive decline — whether Democrat or Republican — shouldn’t control the nuclear codes. We should all agree on that. And you can be sure that if a Democratic president behaved in the ways Trump does, Republicans would be howling for a thorough cognitive evaluation.

But think about this in a more personal way: If a loved one of yours began behaving as Trump does, would you be concerned about them? Would you want them evaluated, just to be sure?