As a Warren supporter, I was demoralized and pessimistic prior to last week’s Nevada debate. But with her opening salvo, I felt my hair blow back and my energy surge. It was blood lust I was feeling, a sort of emotional arousal that felt great … and also a little bit shameful. After all, hadn’t I always bemoaned and rejected attack politics?

I wasn’t alone in that response. In the following week, I’ve repeatedly heard Warren supporters and skeptics alike voice not just glee, but also a bit of shock. What had we just witnessed? And, on the verge of the South Carolina debate, do we want a repeat performance?

But actually, “performance” is the wrong word. It implies a lack of authenticity, and if nothing else, most of the candidates on that stage were more emotionally expressive than we’ve ever seen them. By which I mean angry. Everyone on that stage was incensed for short stretches (except, perhaps, for the perpetually composed Mayor Pete, whose demeanor was as unruffled as his hair). 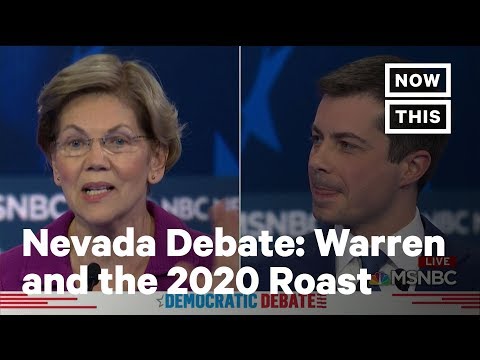 Still, not all anger is created equal.

Sanders and Biden were defensive, and their rising voices and jabbing fingers signaled would-be predators to back off. Bloomberg’s eye rolls revealed precisely the kind of arrogance with which he was being charged. Amy Klobuchar’s annoyed retort to Buttigieg — “Too bad we can’t all be perfect like you, Pete” — was a somewhat juvenile but utterly relatable comeback to his sanctimonious skewering.

But Elizabeth Warren’s affect and body language were the same as always. Her demeanor was calm, if acid. Unlike the fuming retorts of others, her aggression was a product of anger that was neither transient or reactive.

Some pundits — most notably Washington Post columnist Jennifer Rubin -- chastised her for being mad at, well, anyone. “Mean and angry is not a good look for Warren,” Rubin scolded. She and others took Warren to task for going after the wrong candidate. After all, Sanders leads in the polls and the delegate count, they argued. Shouldn’t he be the target?

No, and not just because Warren agrees with Sanders on so many points. She didn’t target him because her anger isn’t just a tactic, and it certainly isn’t just for show. It’s rooted in the belief that power shouldn’t reside with those most able to buy it. Her systematic evisceration of Mike Bloomberg wasn’t because she felt personally wronged, but because she believed that his actions were wrong.

As Helaine Olin wrote of Warren’s defense of Amy Klobuchar in that debate, “'This is not right,’ [Warren] told Buttigieg. This is not right. Those are words for the Trump era. The children separated from their parents at the border, the grotesque personal corruption of Trump, the financial cruelties inflicted on those in need — none of those are right. … Warren emerged as the victor of [last] Wednesday’s debate, in part by taking full advantage of the particular type of moral authority we permit women — especially women of a certain age — to show in our society ... Yes, it’s anger, but it’s something more than that …”

In a speech last year, Warren herself explained that “something more.” Referring to the shameful lesson that the Brett Kavanaugh supporters imposed on his accusers, she said, “It’s not just women. Anyone else who has less power should be quiet, because ultimately what this is about is power … this is about who’s got power and who doesn’t plan to let go of it.”

That understanding and how she acts on it is what was and will continue to be so energizing and, for those in power, so alarming. It was thrilling to see her relentlessly challenge an arrogant man who hadn’t deigned to do the hard work of retail politics in the early states, a candidate who could simply circumvent the rules that had forced Harris, Booker and Yang to withdraw. Warren supporter or not, many of us were joyful at the prospect of seeing her take apart Donald Trump the way she did Mike Bloomberg. Many of us emerged from that debate feeling not just hope, but a sort of dazed confidence.

But it’s also true that Warren’s righteous but naked aggression made some women uncomfortable. As Heather Souvaine Horn observed of the Nevada debate, “Acceptable female passion and aggression in American culture is typically cloaked in the language of motherhood. That’s particularly true for presidential and vice-presidential candidates — as though a role that has never been female can only be attained by leaning into an identity that has always been female. Clinton was the ‘it takes a village’ mom. Sarah Palin was the hockey mom, the ‘mama grizzly.’ No moms advertised their motherhood in Nevada on Wednesday night.”

Still, not all anger is created equal.

That’s what was so invigorating about the Nevada debate, and remains so healthily unnerving about both women's campaigns, particularly Warren’s. She is speaking harsh truth to and about power.

“Why are angry women so threatening to others?” psychologist Harriet Lerner asked in her groundbreaking book, "The Dance of Anger." “If we are guilty, depressed, or self-doubting, we stay in place. We do not take action except against our own selves and we are unlikely to be agents of personal and social change. In contrast, angry women may change and challenge the lives of us all …”

So should we want to see more punches and counter-punches in Tuesday's South Carolina Democratic primary debate?

No, not if they’re intended solely to score points. But if candidates’ anger surges in response to the wrongs that have been inflicted not just on themselves but on others, then yes, let it show. If blunt, combative words illuminate the destructive workings of the status quo and incite action, let’s hear them.