Everywhere you turn there are reminders that it’s election season. Lawn signs, bumper stickers and campaign ads abound. We don’t need to wait to understand the many ways in which our current system isn’t working.

Government doesn’t reflect the diversity of the people it represents. Campaigns regularly fall prey to the ugly side of politics, and corrupt special interests and those with deep pockets hold too much power in our democracy, silencing the voices of everyday people. Voters often feel compelled to play strategist in the voting booth rather than simply supporting the person who they like the most.

What’s one thing Massachusetts voters can do right now to help fix this? When you receive your ballot either by mail or at the polls, vote "yes" on Question 2 for ranked choice voting. It’s a common-sense approach to voting that will increase diversity and competition in our elections and put the power back where it belongs: in the hands of voters.

If you can rank your favorite ice cream flavors, colors or sports teams, you can master ranked choice voting.

Ranked choice voting is simple, fair and easy, and it’s been used across the country --and here in Massachusetts — for years.

If you can rank your favorite ice cream flavors, colors or sports teams, you can master ranked choice voting. Voters are given the opportunity to rank the candidates in order of their true individual preferences rather than given binary choices. If one candidate gets a majority, he or she wins. If not, ballots are counted in rounds, where the last-place candidate loses until one candidate reaches a majority and wins. If your favorite candidate doesn't win, your vote counts for your second choice, so you never feel like your vote is wasted.

How will this change things? A few ways.

Dirty politics will fizzle. Because voters can express preference beyond their first choice, and because a majority is required to win, ranked choice voting would deter the most divisive tactics and reward strategies that are attractive to a broader population of voters. Nasty rhetoric, negative advertising and other tactics that have become so commonplace in our politics would decrease. 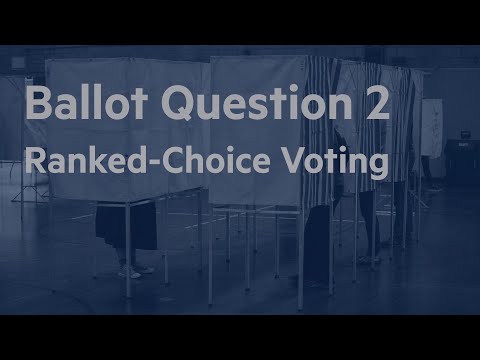 New, diverse voices will emerge. Currently, the political deck is stacked against refreshing upstart candidates, and often women and candidates of color, not because their ideas aren’t sound, but often due to a lack of name recognition, donor connections and cash resources. Too frequently our “first past the post” system easily casts these types of candidates as longshots, which leaves voters stuck with the unsatisfying perception that they must decide only between the top contenders instead of the candidate they like best.

Ranked choice voting will increase representation for women, particularly women of color. A 2018 study by FairVote found that in 11 California cities that adopted ranked choice, there was an increase from 17.2% to 25.6% in candidates of color who ran for office. After ranked choice voting was used in local elections in the San Francisco Bay Area, the probability of a female candidate winning rose from 40.2% to 44.6%.

You can leave campaign strategy to the cable news pundits. Crowded primaries are wonderful for democracy, but they can make it hard for voters to pick a favorite, especially when candidates may not appear to differ greatly on issues. Under our current system, voters are left to assess who has the best shot of winning — or of blocking a less desirable candidate — rather than assessing who has the background or platform that most appeals to them. Under ranked choice voting, you will have the opportunity to express support for a range of candidates who would satisfy your needs as a constituent.

In 11 California cities that adopted ranked choice, there was an increase from 17.2% to 25.6% in candidates of color who ran for office.

Big money will have less power. We have allowed big money and special interests to siphon power away from voters, and we’ve given outside candidates just two choices: Drop out to save face, or be given the title of “spoiler.” Winning is hardly on the menu. Ranked choice voting eliminates this “spoiler” effect by giving voters the power to rank the candidate they like most without worrying that they’re wasting their vote, or worse, helping to throw the election in favor of a candidate they dislike. This means a more economically diverse candidate pool, including first-time candidates.

The best part: it has been tested in American politics. Whether in statewide elections in Maine, elections in big cities like Cambridge, San Francisco and Minneapolis, or in countless smaller communities across the country, we know ranked choice voting works. We also know that voters like it. Voters in Minneapolis have been using ranked choice since 2009 and continue to report positive results, 92% of respondents there said they find voting with RCV “simple.” Our neighbors to the North agree: over 90% of voters in Maine reported their experience with Ranked Choice as “excellent” or “good” in a 2018 exit poll.

Ranked choice voting is a simple change to our election system that will produce better candidates, improve governance and make government work better for everyone in the Commonwealth.