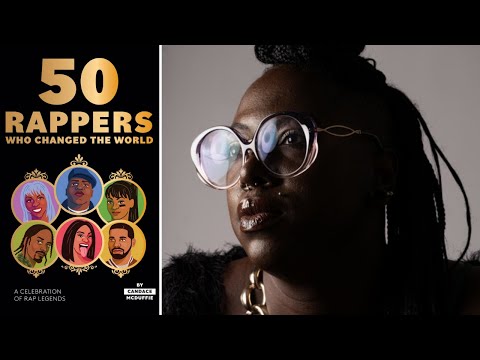 The ARTery contributor and author Candace McDuffie discusses her new book, "50 Rappers Who Changed the World." McDuffie is a respected cultural critic and music journalist who focuses on the intersection of race, gender and entertainment. Her written work has been featured on digital platforms such as: Rolling Stone, MTV, Forbes, Grammy.com, Paper, Entertainment Weekly, Glamour, Vibe, Tidal, Marie Claire, NBC NEWS and Boston Magazine. You can order the book here.
About "50 Rappers Who Changed the World"
Arguably one of the most mainstream music styles today, rap was in fact born centuries ago in West Africa with historians or 'griots' who used to tell stories of the past over the beat of a drum. But it wasn't until the 1970s in New York that rapping as we know it was born and began to flourish.

"50 Rappers Who Changed the World" profiles some of the genre's biggest influencers, from the 1970s until the present day. From Bronx-based legends Afrikaa Bambaataa and Grandmaster Flash in the 70s, to Run-DMC and Public Enemy in the 80s, Biggie, Tupac and Snoop in the 90s and Eminem and Jay-Z in the 00s, this is a history of music for anyone who loves rap. Featuring MCs like Melle Mel, West Coast legends including N.W.A. and Ice-T and countless women who changed the game, like Salt-n-Pepa, MC Lyte and Missy Elliot. And today, we have a new breed of artists who are dominating the charts, from J. Cole to Kendrick Lamar, Logic and Cardi B.

Filled with a stylish illustrations and short biography of each artist, this book is a celebration of the musicians who shaped the genre and changed the world.