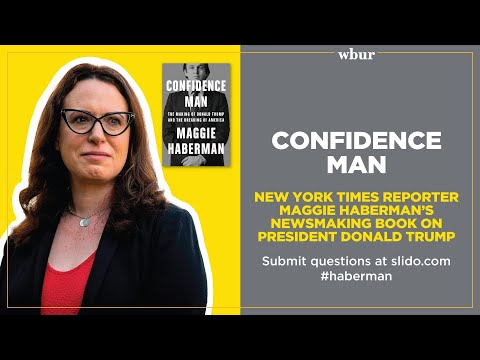 Journalist Maggie Haberman’s reporting on Donald Trump’s presidency captivated countless readers during his four tumultuous years. She and a team at the New York Times were also awarded a Pulitzer Prize in 2018 for their reporting on the investigations into Trump and his advisers’ connections to Russia. But Haberman chronicled Trump for years before his White House run and may be one of just a few journalists to understand him, his motivations and perhaps what makes the 45th President tick.

Here & Now co-host Robin Young interviewed Haberman about her new book, “Confidence Man: The Making of Donald Trump and the Breaking Of America” which reveals new insights into the Trump White House.

About "Confidence Man”
From the Pulitzer-Prize-winning New York Times reporter who has defined Donald J. Trump's presidency like no other journalist: a magnificent and disturbing reckoning that chronicles his life and its meaning from his rise in New York City to his tortured post-presidency.

Few journalists working today have covered Donald Trump more extensively than Maggie Haberman. And few understand him and his motivations better. Now, demonstrating her majestic command of this story, Haberman reveals in full the depth of her understanding of the 45th president himself, and of what the Trump phenomenon means.

Interviews with hundreds of sources and numerous interviews over the years with Trump himself portray a complicated and often contradictory historical figure. Capable of kindness but relying on casual cruelty as it suits his purposes. Pugnacious. Insecure. Lonely. Vindictive. Menacing. Smarter than his critics contend and colder and more calculating than his allies believe. A man who embedded himself in popular culture, galvanizing support for a run for high office that he began preliminary spadework for 30 years ago, to ultimately become a president who pushed American democracy to the brink.

The through-line of Trump’s life and his presidency is the enduring question of what is in it for him or what he needs to say to survive short increments of time in the pursuit of his own interests.

"Confidence Man" is also, inevitably, about the world that produced such a singular character, giving rise to his career and becoming his first stage. It is also about a series of relentlessly transactional relationships. The ones that shaped him most were with girlfriends and wives, with Roy Cohn, with George Steinbrenner, with Mike Tyson and Don King and Roger Stone, with city and state politicians like Robert Morgenthau and Rudy Giuliani, with business partners, with prosecutors, with the media, and with the employees who toiled inside what they commonly called amongst themselves the “Trump Disorganization.”

That world informed the one that Trump tried to recreate while in the White House. All of Trump’s behavior as President had echoes in what came before. In this revelatory and newsmaking book, Haberman brings together the events of his life into a single mesmerizing work. It is the definitive account of one of the most norms-shattering and consequential eras in American political history.