WATCH: A conversation on climate action and activism with author and environmentalist Bill McKibben 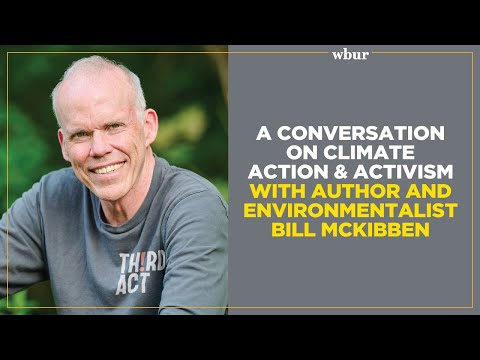 McKibben founded 350.org, the first global grassroots climate campaign, which has organized protests on every continent for climate action. He also recently launched Third Act, which organizes people over the age of 60 to work on climate and racial justice.

He has written over a dozen books about the environment, including his first, “The End of Nature,” and the forthcoming “The Flag, the Cross, and the Station Wagon: A Graying American Looks Back at his Suburban Boyhood and Wonders What the Hell Happened.”

About “The Flag, The Cross, and the Wagon”
Like so many of us, McKibben grew up believing—knowing—that the United States was the greatest country on earth. As a teenager, he cheerfully led American Revolution tours in Lexington, Massachusetts. He sang “Kumbaya” at church. And with the remarkable rise of suburbia, he assumed that all Americans would share in the wealth. But fifty years later, he finds himself in an increasingly doubtful nation strained by bleak racial and economic inequality, on a planet whose future is in peril.And he is curious: What the hell happened?

In this revelatory cri de coeur, McKibben digs deep into our history (and his own well-meaning but not all-seeing past) and into the latest scholarship on race and inequality in America, on the rise of the religious right, and on our environmental crisis to explain how we got to this point. He finds that he is not without hope. And he wonders if any of that trinity of his youth—"The Flag, the Cross, and the Station Wagon"—could, or should, be reclaimed in the fight for a fairer future.

This event is made possible with support from:

Delta Dental of Massachusetts: The largest provider of dental benefits in the state, Delta Dental is a leader in innovative programs that improve the overall health of members, prevent oral disease and reduce health care costs for employers, groups and individuals.

Cambridge Trust: A modern private bank that powers your way to wealth, Cambridge Trust serves clients in Massachusetts and New Hampshire with a full suite of financial solutions delivered with a robust level of service. Offering private banking, wealth management*, commercial and innovation banking to power your ambition. Member FDIC.

*Not FDIC Insured, Not Bank Guaranteed, May Lose Value