Pulitzer Prize-winning author Ron Suskind’s best-selling book, “Life Animated, A Story of Sidekicks, Heroes and Autism,” tells the story of how he and his family discovered that Disney films were a way to communicate with his son Owen, who has autism.

Hear our conversation with Ron and Walt Suskind from May 2014.

Williams, on what drew him to the story

"I've known Ron for a long time, I've known him for 15 years, so when he was writing the book he came to me and said, ‘I think this will make a good documentary,’ and I jumped on it. Because this really about, a film about the power of story, about the power of love of one family, and for me I always saw it as a coming-of-age story. Owen goes through all the things in the film that we all go through in our lives. He graduates from college, he falls in love for the first time, and then he strikes out on his own and becomes independent. And so the film picks up where the book leaves off, and it follows him in this really transformational year of his life."

Owen Suskind, on what it was like to have cameras around during filming

"It was a little uncomfortable at first, but then over time I started to get used to it."

Ron Suskind, on his reactions to the documentary

"Owen is more and more living his own life out in the world. And part of this movie is about all the things, again, all parents go through, which is letting them go, releasing them. And what's fascinating about us watching the movie is we get to hear the voices of our children in ways we don't otherwise hear them, through the movie. It's actually given us even more confidence than we've ever had that Owen will be ok as he goes forward. He's making sense of the world at a very high level using myth, fable and legend, using the content he loves, the movies and other things. So, actually, it’s helped us lessen fears that we once had."

Ron Suskind, on what it’s like to see Owen living on his own

"It’s exciting. We never knew, Cornelia and I, what to expect going ahead. That's why we often lived in the present with Owen, almost like we were afraid to think of the future too much. Now we see Owen ever more as a captain of his own ship. He will always be an autistic man, or a man with autism. This isn't a spell that gets broken. Ultimately, he's now moving his own life forward. And that's very exciting for us to watch."

Williams, on what he learned making the documentary

"You know, when I started this film, I didn't know anyone living with autism, and so my goal in the film was always to really show the world through Owen's eyes. Not only did I learn so much about people living with autism, but I learned that Owen has so much to teach me as a storyteller and as a filmmaker. He made me a better filmmaker, making this film. He made me a better storyteller, and it was an enriching experience.

I think when people come to see the film, the film starts out and you may be uncomfortable because you see Owen pacing and talking, but by the end of the film, you know exactly what's going on in his head and that sort of uncomfortableness has gone away."

Owen Suskind, on how it feels that the book and documentary are inspiring people

"It feels wonderful and fascinating."

Watch A Trailer For 'Life, Animated' 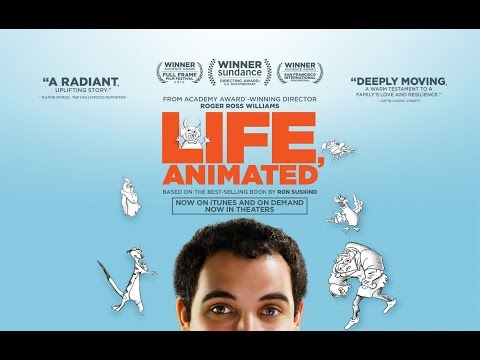 Owen Suskind, Ron Suskind's son and focus of his book.