Last year, 61 whales were tangled up in fishing gear off the West Coast of the United States, according to data from the NOAA’s National Marine Fisheries Service.

Fishing ropes can cut off circulation to the whale's fins and can eventually lead to its death. It’s a growing problem across the globe. Warmer waters are forcing whales into different feeding grounds and successful conservation efforts are increasing the number of whales in the ocean, according to experts that track the issue.

In June, an 80-foot blue whale was found off the coast of Dana Point, California, listing in the water. The crew of Captain Dave’s Dolphin and Whale Watching Safari filmed the animal dragging 200 feet of rope and buoys from what appeared to be a crab pot. 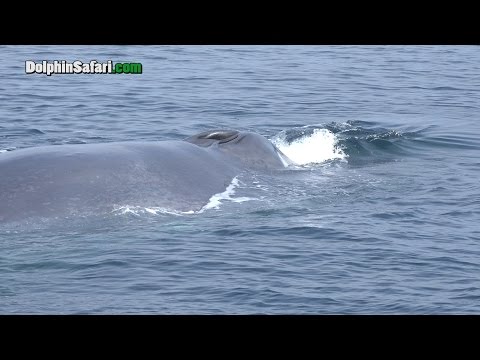 But what if the problem could be solved with simple modifications to the gear that fishermen use?

Massachusetts lobsterman John Haviland got a grant from the state to test fishing ropes that break more easily under the weight of the animals.

His ropes are attached to a buoy at the surface, and run vertically to the lobster pots that rest on the ocean floor. It's these types of ropes in the water column that a passing whale can get caught in.

Haviland made a cut in the standard rope and repaired it with a bright orange synthetic sleeve. The sleeve locks in place, just like the Chinese finger trap toy that he played with as a boy.

"You’d put your fingers into this tube and when you tried to pull them out it would lock down on it," he said. "It’s under that theory."

The sleeve puts a weak link into the rope, and lowers its breaking point from 3,000 pounds of pressure to about 1,600 pounds — enough to allow an endangered North Atlantic right whale to bust free.

It’s one of several solutions scientists like Tim Werner are studying.

"That would be progress," said Werner, a scientist at the New England Aquarium's Cabot Center for Ocean Life. "The evidence from our research suggests the larger whales should be able to break free from that gear."

But that leaves younger right whales vulnerable, along with other species like the endangered leatherback sea turtle.

"These are close relatives of ours in the sea. They do sense a lot of pain and suffering from this, and it's a pretty gruesome thing to see when these ropes tear into the tissue of flippers and tails and cause a lot of disfiguration."

Tim Werner, a scientist at the New England Aquarium, on whales getting caught in fishing rope

Researchers are also looking into designing traps that don’t require vertical lines, Werner said. An inflatable device can be engaged remotely to send the trap to the surface.

"This concept has been kicking around for years, and in fact, they’re using it in Australia," he said.

The stakes are high. Werner said that six right whales have been entangled in fishing gear in the northeast so far this year. At least two have died.

"These are close relatives of ours in the sea," he said. "They do sense a lot of pain and suffering from this, and it's a pretty gruesome thing to see when these ropes tear into the tissue of flippers and tails and cause a lot of disfiguration."

That's part of the reason Haviland and a few of his fellow lobstermen are testing modified ropes in New England. But it's also about his livelihood. Federal rules are in place to protect the right whale, and they prohibit him from setting traps for several months at the beginning of each year.

If he can show these modified ropes work, he hopes to get permission to brave the Atlantic a few more weeks every winter.

"Obviously I want all the whales to be happy," Haviland said. "But I also want to have happy lobstermen as well."