When Anurudh Ganesan, 17, learned that his grandparents walked 10 miles carrying him when he was an infant in India to get a vaccination — only to find the vaccine was spoiled by hot temperatures — he was determined to come up with an inexpensive device to refrigerate vaccines and other medication.

Similarly, Hannah Herbst, 16, has a pen pal in Ethiopia whose family didn't have a reliable source of electricity, which spurred her to create an inexpensive, water-powered light.

Herbst and Ganesan were awarded the Gloria Barron Prize for Young Heroes, a $5,000 award, for their inventions. They speak with Here & Now's Jeremy Hobson about what motivates them to help others.

On how they started their projects

Anurudh Ganesan: "I was originally born in India, and when I was an infant, my grandparents had to carry me 10 miles to a remote clinic in southern India to get me vaccinated. But when we got there, the vaccines were useless because they were just sitting on the counter and not being refrigerated. And so my parents told this story to me over dinner one day, and I was curious to see if this is still a problem or if other people were affected by something I was also affected by. And so I just took it to the internet, and I did some research and I found out that according to UNICEF, 1.5 million children die annually due to vaccine-preventable diseases." 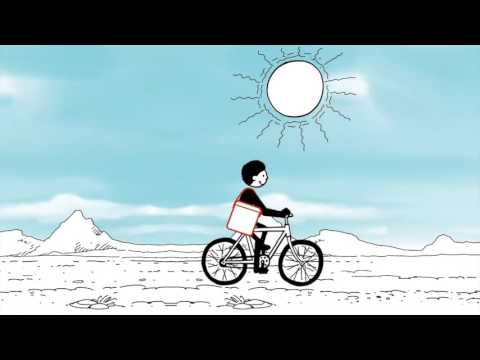 Hannah Herbst: "I invented an ocean energy probe designed to bring electricity access to my pen pal in Ethiopia. So she's living in energy poverty with very unstable access to electricity. And in 7th grade, I recognized this problem through a pamphlet that I received from the organization that put us in contact, and I became very interested in energy poverty. So I created several different iterations of this novel, portable and cost-effective turbine to generate electricity for her and her family.

This prototype is very novel because it's portable. Most of the turbines available on the market are large — they take thousands of man hours to create — and they cost thousands to millions of dollars, whereas mine costs less than $500 to make, the second iteration, and I hope to combine materials from the third and second to make it ever more cost-effective for developing nations."

On how they got into science

Herbst: "In elementary school, I really wasn't interested in science at all. I was very into theater and sports — those were just what I enjoyed. And in seventh grade, my parents put me into this summer engineering and technology camp at Florida Atlantic University, where I am dual enrolled now. And at first, I was kind of turned off to the whole science thing, because I had been trained to just memorize, regurgitate information from a textbook onto a test. And I really wasn't doing science. But in that engineering camp, where I was the only girl on the program, I learned about how to innovate and I created robots and that inspired me to help my pen pal's energy poverty problem. That's really how I got interested in science, and as soon as I got back to school, I made sure to join a bunch of science clubs that I could continue to hone my engineering skills that I'd just discovered."

Ganesan: "Especially when I was a kid, I really liked playing with Legos and that really got me into the whole innovative part of engineering. When I was in high school, I realized that science can just do more than hone my own personal skills, but can help others as well, such as cancer research — what I’m actually currently doing — and what I'm working with VAXXWAGON, and I realized that using science, you could also promote STEM education, and help people and save lives. And so that's really what motivated me to get into science."

This article was originally published on November 04, 2016.