When you think back to your grade-school history lessons, what do you remember about the story of Thanksgiving?

It was the early 1620s when a group of refugees fled religious persecution in Europe and set out to cross the Atlantic Ocean on the Mayflower.

And when those weary Pilgrims first set foot in the New World, to eventually meet the Native Americans who would help them survive the winter, where did they land?

Well, legend says one of the first spots was here, at the prodigious Plymouth Rock. 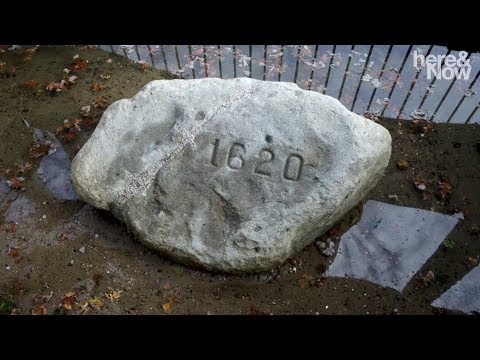 "Well, it's called the 'great New England disappointment,' " says Donna Curtin, the executive director of the Pilgrim Hall Museum in Plymouth, Massachusetts. "People expect to see something that looks like a wharf or a pier that a ship could tie up to and the people could disembark. And that's not what we have."

Not even close. Curtin and I met on a crisp fall morning, underneath the portico at the edge of Plymouth Harbor. Up to 1 million visitors a year stand on a viewing platform and peer down at a modest slug of granite partly buried in the sand.

"So we have the poor little top of the rock that's been exposed, as you can see, to the tides coming in, covering it," Curtin says. "Twice a day it's covered up underwater. And this placement was done about 100 years ago, in 1920, because the rock used to be up on higher ground, and people were kind of confused at thinking of it as a landing place that should be down by the shore.

"The poor rock has been chipped and split and dropped and souvenir hunted for centuries. So we're looking at something that is not in the prime of its youth and glory, that has been used and interacted with sometimes pretty aggressively over the course of many, many generations. So, I think we have to give the rock a little bit of leeway in its diminished size in this day and age."

That seems fair. But, I ask, how do visitors react when they first see the rock? Do they often say something like, "Oh, that's it?"

"That is pretty much exactly what we hear a lot of them say," says Matt Villamaino, an employee at Pilgrim Memorial Park.

"We do point out that about half of it is underneath the beach level, but one of the things that I like to focus on is that it's not the size of the rock that's important — and it doesn't even matter at this point if they actually stepped on it — it's the symbolism behind the rock that really is what makes it important today," Villamaino says.

"Where there's talk, there's hope. And if Plymouth, Massachusetts, and Plymouth Rock can be a part of that conversation, I think that's a good thing. Something to be grateful for."

Most Americans who know something about Plymouth Rock might think that in 1620, the Pilgrims landed at this site and stepped upon this rock.

But there's a question about whether or not that even happened.

"Some historians are a little skeptical, myself included," Villamaino says. "The timing would have had to have been just right with the tides. The original settlement is only about 500 feet from us, it's where they built their houses. So they definitely saw it here on the beach. But one of the biggest questions that I have as far as them stepping out onto it, is the sailors aren't going to want to break their ship by putting it right next to a rock."

Even more notably: It wasn't until 100 years later, in the 1740s, that the idea that the Pilgrims disembarked at Plymouth Rock came to be.

"In 1741, they were gonna build a wharf here," Villamaino says. "And one of the elders of the church, his name was Elder Faunce, he came down here to the beach to say goodbye to the rock. He was in his 90s, and he had heard from his father who heard from the original Mayflower passengers that this was where they stepped when they landed here, and he told the townspeople.

"But it really doesn't — for lack of a better term — it doesn't 'go viral' until 1769, when the people here in Plymouth start celebrating Forefathers' Day and the story is retold."

At that point, the story of Plymouth Rock started to become a legend — at the same time that the American Revolution was starting to take root.

"In 1774, right before the Revolution, the upper part of the rock was moved from here on the beach up to the town square ... they decided to move it to a more honorable spot. Unfortunately, when they were doing that, as they were lifting up, it broke in half, top and bottom. So they left the bottom here in the middle of the wharf and brought the top up to town square."

The splitting of the rock carried symbolism that was not lost on the people of Plymouth.

"Some people saw it as a sign that we should split from England," Villamaino says.

And ever since then, the rock has carried the weight of its own symbolism. Kathy Swain traveled here all the way from Carlisle, Iowa, and she was expecting "a bigger rock."

But she wasn't disappointed.

"It brings it closer to your heart that your forefathers went through what they went through for me to be here today standing here talking to you," Swain says. "So, that means a lot to me."

And it means something else to others.

"Our forefathers weren't the Pilgrims," civil rights leader Malcolm X says in a 1964 speech. "We didn't land on Plymouth Rock. The rock was landed on us."

In the speech, Malcolm X rejected the rock's identity as a stepping stone for American destiny.

"I think that’s powerful," Curtin says of the rock having negative connotations to some around the country. "I like to remember when Sojourner Truth came here, to visit Plymouth, in the 1850s — a fugitive slave and a beacon and a voice, for freedom for African-Americans in this country throughout her life. And she said, 'Plymouth Rock, to many, symbolizes liberty and freedom. Well, what about the fugitive slave? Does it mean freedom for me?' And I think that question still resonated with this. Does this symbol of liberty in America extend to all of us?"

Of course, the Native Americans who lived here would say no.

"It was the village of Pawtuxet. And at one point, this was filled with the homes, with the wetus, the corn fields of the Wampanoag people that had lived here for millennia before the Pilgirms arrived," Curtin says. "They had suffered a terrible illness before the arrival of the Mayflower in 1620, and this village was decimated. There were still bones on the ground, abandoned homes.

"To the Pilgrims, this was God's Providence. They were able to come into this, what they considered to be an abandoned area, and build their homes and settle here with cleared land, and they saw it as a blessing of God. To the Wampanoag people, of course, it was one of the most devastating events in their 10,000-year history."

And that was only the beginning. On Thursday, as they do each Thanksgiving Day, a group of Native Americans will hold a vigil here.

They call it the National Day of Mourning.

"Last year we had a couple of thousand people out there," says Bello, an indigenous activist who goes by one name.

She says over the years protesters have buried the rock in sand to remind people that the Pilgrims and the Native Americans weren't friends.

"Frigid cold New England weather, it's really remarkable that people do this, and why not?" Bello says. "There's a lot of people who are seeking truth right now.

"I and many others in the United American Indians of New England believe we move out of the motto that we are not vanquished, that we are not conquered and we are as strong as ever. And when we see that rock, as we gather in thousands, we see that."

It's a viewpoint that Donna Curtin can empathize with.

She took me inside the Pilgrim Hall Museum — just a short walk up from the harbor. Inside, there's a piece of Plymouth Rock that visitors can walk up to.

"This is the part you can come in and touch," Curtin says.

It's a cold, hard scrap of American history. And nearly 400 years after it was discovered, it is still prompting us to ask questions about what it means to be a newcomer in this country.

Even if those questions aren't easy to answer.

"Where there's talk, there’s hope," Curtin says. "And if Plymouth, Massachusetts, and Plymouth Rock can be a part of that conversation, I think that’s a good thing. Something to be grateful for."

This article was originally published on November 20, 2017.