Two black bears in Southern California have been released back into the wild after they were badly burned in last year's deadly Thomas Fire. When wildlife officials found them in the Los Padres National Forest, the skin on their feet had been destroyed by third-degree burns. A team of veterinarians used an unorthodox treatment: bandages made of tilapia skin.

On this approach to treatment

"When I first got called out — because my interest in integrative medicine, we like to think outside the box — and when we first went out to see these bears they had such severe third-degree burns on all four feet, to treat them — if it was a dog it would be easy to change their bandages every day, look at their wounds every day. But with wildlife, we can't do that. Every time we have to do something with them for our safety and their safety we actually have to anesthetize them or heavily sedate them. The other issue is, unlike a dog or cat where you can kind of make them take a pain medication, a bear is not so kind about taking things that they don't want. So controlling their pain, it was a little bit harder. And then we were also in a bit of a time crunch. We wanted to get these wild animals back to their environment as soon as possible. And then when the other bear, we found out she was pregnant, it really became a time crunch because we didn't want her to have that baby in captivity."

"The first time that bear stood, and she hadn't been standing in a couple weeks, I thought, 'Oh, my God. This is great.' "

On where the idea for the bandages came from

"I remembered hearing about a story — about a year ago, a research group down in Brazil started using tilapia for [human] burn victims down there, and I thought, 'Well that might be a really interesting solution for us because we don't have banks of skin for animals.' And I thought, 'Well these bears need something to protect their feet that will be tough, to provide some pain relief and keep it covered and ... help with wound healing. And the tilapia skin has all those properties and it's really easily accessible.' So accessible, it was literally going down to the local fish market and finding fish. And then putting together a protocol to sterilize those fish and get them ready and put on the patients." 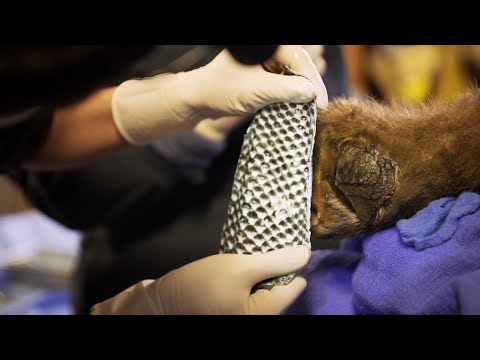 "That's something we're looking into. The research that's been done down in Brazil, and also a couple other groups have been looking at the properties of fish skin itself, and what they've found is it has a very high level of collagen, and specifically tilapia has higher levels of type I and type III collagen, which you need to act like sort of a scaffold or matrix that allow the cells to kind of cross over that wound and help heal it properly. So right now we're going to be looking at other fish skin as well, but we knew from their research down there that it was helpful."

On how well the treatment worked

"After we prepare the skins, they don't smell like fish anymore. So the bears would not recognize it as fish skin. Animals are much smarter than we give them credit for, and usually if something hurts or something bothers them they lick it, they pick at it. But if you stop that pain and you make them feel better off, they'll often leave it alone. And what we found with both of the bears is that they would not take [the bandages] off. They would actually leave them on, and they didn't bother them at all. And I really do think it's because their pain was better. It worked great. I definitely think it was a bigger success than we had anticipated. Anytime you try a new idea, you're always hopeful, but it's an experiment in some ways where you're trying to see, 'Is this going to help?' And it definitely did. The first time that bear stood, and she hadn't been standing in a couple weeks, I thought, 'Oh, my God. This is great.' And then seeing the wounds heal much faster time than we anticipated."

"I think there's a couple ways to view it. And everyone, of course, can have their opinion, but wildlife keeps getting impinged on by us, and we have a responsibility to these animals. The wildfires affect people. ... They affect pets. We definitely help all the pets. The wildlife have also been caught up in this as well, and my feeling is it's partially our responsibility to help these animals if we can."

This article was originally published on February 12, 2018.