When the Vermont senator calls himself a democratic socialist, he refers to Franklin D. Roosevelt’s philosophy that the government should take responsibility for the health, well-being and security of American citizens, says Barnard College political science professor Sheri Berman.

This means democratic socialists in the U.S. support a generous welfare state — which today includes policies like universal health care and free college education, she says. 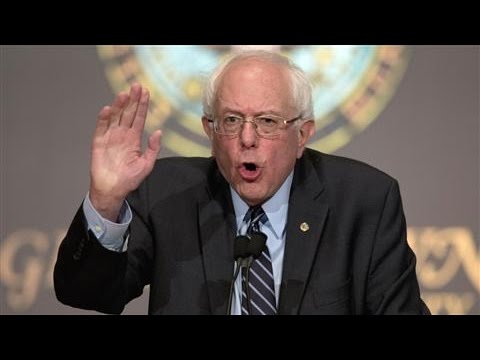 But when Sanders’ critics call him a socialist, they mean something quite different. President Trump and other Republicans often use the word socialism as a slur, conflating it with communism.

During Franklin Roosevelt’s presidency, socialism was often linked to Soviet Union policies. Now, Berman says the theory is associated with countries like Venezuela and North Korea — where the government also controls the economy and doesn’t allow its citizens political freedom.

“For Republicans, both then and now, socialism is something much scarier,” she says. “We're talking about two very, very different things but oftentimes using the same term.”

In Europe, the presence of a social democratic party helps citizens better define the term and understand what policies social democrats stand for, but in America, it’s less clear, she says.

“Because we've never had a party that has called itself social democratic or democratic socialist, the term is much more difficult to pin down,” she says.

Roosevelt’s New Deal is the closest thing to a social-democratic movement or policy in the U.S., she says. Roosevelt put policies in place to protect both capitalism and democracy, which is more comparable to Elizabeth Warren’s platform than Sanders’s call for revolution, she says.

He sought to mitigate capitalism’s negative effects out of fear that if they grew too severe, citizens would lash out against both capitalism and “democratic governments for not being able to deal with those consequences,” she says.

But Roosevelt avoided the socialist label because he understood the term’s “negative resonance” in the U.S., Berman says. Though he never called himself a socialist, his policies echoed what social democrats were advocating for in parts of Europe during the 1930s.

Europe’s democratic socialists grew out of Marxism, she says, as did communism. But after the 19th century, the two ideologies grew in different directions regarding democracy.

Communists didn’t believe in democracy, free markets or private property, while social democrats were some of the strongest advocates for democracy in Europe, she says.

“Social democrats accepted capitalism,” she says, but knew the government needed to protect citizens from its “negative downsides” for this economic system to work.

Today in the U.S., Berman says the support for Sanders and the idea of democratic socialism stems from the 2008 financial crisis and everything that succeeded it — including growing income inequality, declining social mobility and increased geographic divides particularly between young people based on whether they could afford college.

Americans who feel “insecure and disaffected” are gravitating toward socialist ideas since most capitalist critiques of the 19th century emerged from socialism, she says.

“Critiques of capitalism, not surprisingly, tend to arise at times when significant numbers of people feel the system is not working for them,” she says.

On the difference between the terms liberal and progressive

“That's a hard question to answer separate from context. In this country, liberal and progressive are often used interchangeably. Although in this election cycle, progressive has been stressed much more than liberal, simply because I think a lot of people think of liberal now as somehow tainted with the liberal globalized order in Europe. Of course, liberal has a different connotation than in the United States. It's much more hooked up with or linked to a classical liberal tradition, one that actually favors things like free trade, but also protection of individual rights and things of that nature. So a lot of these terms have been used for so long and in so many different contexts that it is often hard to pin them down.”

“We're seeing [populism] again come back in full force in this election cycle, not only because Trump is often referred to [as] a populous, but growing numbers of people feel like there are some aspects of Sanders' appeal that should be characterized as populist. And by that, they generally mean not just a strong anti-establishment message, but a sort of sense that, you know, the polity or society is divided into good and bad, that there's some kind of elite that is blocking somehow the sort of needs and demands of the masses from being heard, that there is some kind of evil cabal. Again, that's kind of working behind the scenes to kind of undermine democracy. So there are some aspects of that that we can see in the Sanders campaign a little bit. We can certainly see it in Trump's rhetoric and appeal, and we see it in a wide variety of parties, mostly on the right in Europe and also other parts of the world.”

“I think that that's really where she's trying to position herself as the kind of, you know, person at the crosscurrents of all of these different trends and debates that are going on within the Democratic Party. Now, look, she has made very clear that actually in some ways she's closer to what Roosevelt said and did because she claims she's a capitalist and that the incredible number of policy proposals that she's put forward are not designed to so much transform the system from capitalists to something else, but rather to sort of save it from itself to kind of correct all of the negative consequences that it's had.”

Julia Corcoran produced and edited this interview for broadcast with Kathleen McKenna. Allison Hagan adapted it for the web.