Jim Carrey’s new book — “Memoirs and Misinformation” — is anything but a typical memoir.

Instead the novel, written with Dana Vachon, centers around a character named Jim Carrey, a successful comedian who deals with wildfires and the possibility of an apocalypse on his quest for relevance and artistic recognition. Debuting on The New York Times bestseller list this week, the work of fiction namedrops other stars such as Nicolas Cage and Gwyneth Paltrow.

Carrey and Vachon met a decade ago on Twitter. “Memoirs and Misinformation” was inspired by conversations between the two “exploratory,” “inventive” people that began eight years ago, Carrey says.

The first two to three years of talking built trust between the co-authors, Vachon says.

“We had a long conversation that lasted a few years and eventually evolved into this kind of explosion of ideas and Apocrypha about my life,” Carrey says. “And we decided that memoirs just aren't where it's at because they're kind of fictitious anyway.”

At some point in the conversation, the duo decided to do something with all of the creative ideas flowing between them.

From American history to the legend of King Arthur, Carrey believes all stories have been embellished. By creating a surreal world with elements of reality within it, writers can paint a “truer portrait,” Vachon says.

Their friend Gillian Adler, a professor of medieval literature at Sarah Lawrence College, pointed out that they aren’t the first writers heading down this path.

“Dante did it in ‘The Inferno,’” Vachon says. “And I think we ended up composing an inferno.”

When Carrey and Vachon met, Carrey had just completed a painting of Malibu in flames. The painting put “Inferno” and the image of a fiery apocalypse on their minds from the beginning, Vachon says.

Many people question what celebrities will think about the book, but using contemporary celebrities in fiction is a time-honored tradition, Carrey says.

Through satire, “Memoirs and Misinformation” touches on issues in Hollywood such as cultural appropriation and white actors playing people of color. Other parts of the book speak to the quest to stay relevant — a universal feeling heightened by social media.

Social media instilled a desire and obsession of relevance in people, a hope that strangers will hit the follow or subscribe button, Carrey says. Everyone became the character Truman from his classic film “The Truman Show,” where he played a man who discovers his entire life is being filmed and watched by a worldwide audience.

When fans ask Carrey what happened after Truman leaves the bubble at the end of the movie, he points out that everyone in real life decided to enter a bubble.

“Ultimate loneliness is this hyper-connectedness, but we never really get to know the real people because they're forming themselves by the likes of others,” Carrey says. “Jim Carrey in the book represents that. He represents ego, represents dealing with the extreme weather patterns of fame.”

The character Jim Carrey also represents people’s mistaken conceptions of fame. Very few people understand the “extraordinary event” of everyone knowing who you are at all times, Carrey says.

Fame comes from the Latin word “fama.” In Virgil’s “Aeneid,” the character Fama is described as a monstrous bird with an eyeball and a mouth underneath each of its feathers.

“Fame is a very frightening thing,” Vachon says. “I think that to have navigated it as successfully as Jim has gives him a lot of authority to describe it in the way that we've chosen to here.”

The main character named Jim Carrey isn’t exactly Carrey in real life. But like fictional Jim Carrey, real-life Carrey has also struggled with the idea of irrelevance at times.

At the start of a career in Hollywood, people begin “fighting against the world” with a team, he says. But at some point, the team tries to keep the star in a box.

For Carrey, he was boxed in as a comedian who makes people laugh. When he wanted to take on the issue of school shootings, he says his team told him going too far outside what he’s known for would hurt him and that people think he’s crazy.

The personas celebrities create are fiction, Vachon says, which is another reason fiction was the best genre to explore the idea of fame.

The book is packed with human emotions, including comedy. The character Jim Carrey does a movie adaptation of the Hungry, Hungry Hippos opposite of a digitally-created rhino — a version of Rodney Dangerfield.

In this part of the story, as the main character enters this production chamber, the reader also enters “a place of uncertain reality,” Vachon says. Once the duo entered this space, they found themselves living in an unreal yet real place as well.

Because of his personal relationship with Dangerfield, Carrey says his emotions came through even as the duo tried to address serious themes with absurdism.

“[Dangerfield] was such a strong influence. He was such a light,” he says. “I felt so lucky to be on the inside and to be admired by somebody like that.”

In 1997, Carrey went on the Oprah Winfrey Show and talked about how he would visualize his future. He said he wrote a check for $10 million dollars when he was a broke actor that he was able to cash years later. 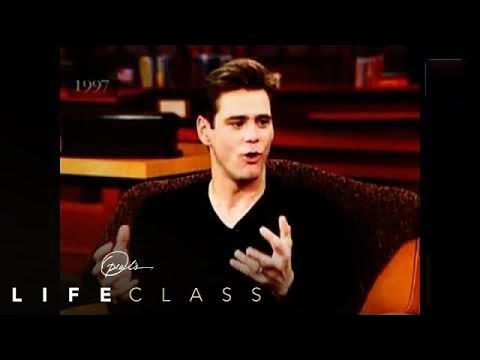 Today, Carrey says he still believes in the magic of the universe. The experience of writing a novel gave him a best friend and brought his mind to unforeseen places, he says.

Working on another project with Vachon feels inevitable to Carrey. The experience was intellectually and spiritually fulfilling, Carrey says, even when the strong-willed creatives had conflicting visions.

When Carrey seems to walk away from his audience, he says fans continue to understand the “wonderful journey” he’s on.

“I think at this point when I kind of go off on a journey and people go like, ‘Well, Jim's doing a journey, man, he's climbing another mountain,’” he says. “‘He's going to come down with some nugget of some sort and tape it onto the rest of the parade float.’ ”

By Jim Carrey and Dana Vachon

A world before, he’d starred in a major summer spectacle, a movie that had effortlessly cruised to a $220 million global box office, with thirty-five percent of this fortune marked for Carrey personally, flooding into his financial reservoirs from distribution territories stretching, as was said, “from Tuscaloo to Timbuktu.” That the film was, even by his own estimation, firmly in his second tier only made its success sweeter: the greater the impunity, the closer to God.

He’d filled with the love of the crowd as the blockbuster rolled out and on, opening in London, Moscow, Berlin. He entered Rome as a slapstick Caesar, walking a hundred-yard- long red carpet where he saw a publicist crouching right in his path and—gauging the moment like a cliff diver the rising tide—tripped right over the guy, going down spread eagle, head and shoulders walloping the carpet so hard that the crowd believed he’d died right in front of them. Lying there, Carrey thought of his uncle Des, shot and killed in a Bigfoot costume while on his way to prank a corn boil. Some lunged to help the star. Others just gasped. Carrey let their concern build before bouncing up like a coil and giving every subsequent interview with one eye crossed.

After, there was a dinner in his honor at the Quirinale Palace. A table for one hundred had been set by the president of the Italian republic. They’d all come for a brush with performative genius and watched, appreciatively, as at the head of the table, Carrey asked the veteran sommelier pouring wine into his glass if he could inspect the bottle. The man stopped and handed it to him. Jim sniffed the cork and examined the label, all of it just a setup for the moment where he plugged the bottle into his mouth and took a long chug before, with the face of a true connoisseur, declaring, “Wonderful. They’ll love it.” They did. They roared, all of them: the Swiss art dealer and the Three Men from Merck and the waiters watching from the kitchen, where the cooks were laughing, too. And the Camorra enforcer who had, that week, put two bodies in the Tiber. And the Swedish ambassador’s husband. They laughed for this sudden relief from the burden of manners, and the laughter bound them across languages as they ate and drank on the marble terrace in the Roman night.

A twelve-piece orchestra played tangos, music that moved the owner of a dry-cleaning chain, a round woman, lonely in her late fifties, to decide, after three proseccos, that, having paid five thousand dollars to a corrupt senator’s even-more-corrupt secretary to be here, there was no reason not to approach Carrey for a dance. She moved toward him like a heat-seeking credenza, and something in the boldness of her spirit swayed Jim Carrey.