Editor's note: This segment was rebroadcast on June 25, 2021. Find that audio here.

Oscar-winning actor Matthew McConaughey is adding author to his resume with his new book "Greenlights."

McConaughey took years of his diaries and turned them into a book that's part memoir, part guide to living. Among the yellow and red light times of our lives, the greenlights are “like a shoeless summer,” he says.

“A green light is an affirmation, setting yourself up for success,” he says. “A greenlight can be as simple as putting your coffee in the coffee filter before you go to bed so tomorrow morning all you've got to do is push the button.”

Through greenlights, people set themselves for ease and prosperity in the future, he says. Sometimes greenlights come through decisions we make, sometimes they’re bestowed upon us.

The way McConaughey writes about his family in the book feels violent, but at the same time, full of love. On paper, the events of his childhood may spark concern of abuse, but he says it wasn’t the case.

At one point in the book, his brother hit his father in the head with a two by four. After the fight, the two hugged and cried it out, he says.

“I tell the stories of discipline and consequence as love stories in this book because they were the moments where the cocoon of love that we all knew our family had, when that was tested the most,” he says. “Yet the love never had a chance of losing.”

In the book, McConaughey writes extensively about his childhood and conflicts he’s faced, with a whole chapter dedicated to his year abroad as a Rotary Exchange student in Australia. But he only spent a few paragraphs on when his father died in the early 1990s.

McConaughey says he still spends time dealing with the loss of his father. When he heard the news, he rushed back home to spend late nights crying with his immediate family for days.

After his father’s Irish wake, his family told McConaughey to get back to work because it’s what his father would have wanted.

“It was never out of sight, out of mind,” he says. “I dealed and learned with my father's passing heavily for the next three years after his death and still do integrate and have him as a part of my life — although only spiritually now — this many years later.”

Another moment in the book that passed very quickly is in the opening chapter, where McConaughey takes one line to reveal that he was knocked out and molested by a man in the backseat of a van when he was 18 years old.

Before writing the book, McConaughey says he never shared this story with his mother or any of his best friends. He wanted to share constructive stories in the book, but he doesn’t know what the lesson is from this “clearly wrong” situation.

He found clarity — and was able to move on — in knowing the situation was undoubtedly wrong.

Originally an aspiring lawyer, McConaughey changed his mind and went to film school. He got his big break in the 1993 film “Dazed and Confused,” where he played a 20-something named David Wooderson who still hangs out with high school kids, as revealed in his iconic line: “That's what I love about these high school girls, man. I get older, they stay the same age.” 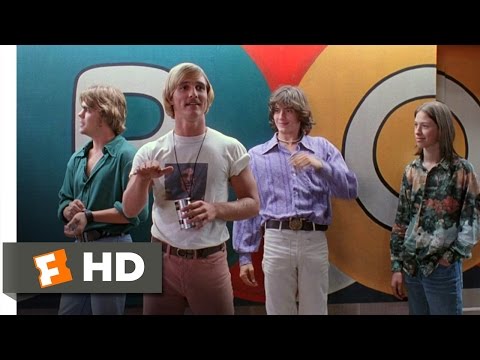 This line launched McConaughey’s career, but few people realize he had no acting experience at this point in his life. He went up to the producer of the film at a bar one night and was invited to audition for the part, he says.

With every role he plays, McConaughey says he tries to find a “launch pad line” like the high school girls statement.

“If this person believes that and is not trying to be cool, not trying to play an attitude, well, there isn't a very thick encyclopedia on this guy,” he says. “A line like that opened up my eyes into the whole character of who Wooderson was to me.”

“Dazed and Confused” launched his career, but his rise to fame didn’t occur until he starred in the 1996 courtroom drama “A Time To Kill.”

While he enjoyed the fame, McConaughey says there’s an “imbalance to it” that made him question what matters to him in life. Solo trips to a monastery and Peru helped his personal identity catch up with his ungrounded reality, he says.

During the “rom-com McConaughey” phase of his career, he says the scripts he would receive weren’t challenging him in the same way as his life. Following the birth of his first child, he decided to take a break from acting.

After 20 months without work, McConaughey says he became Hollywood’s “new good idea.” He says movies such as “The Lincoln Lawyer,” “Magic Mike,” “Dallas Buyers Club” and more came from people wondering, “Where the hell's McConaughey?”

McConaughey won best actor for “Dallas Buyers Club,” a biographical film about a man named Ron Woodroof who tried to find alternative treatments for AIDS after learning he had the disease in the 1980s. 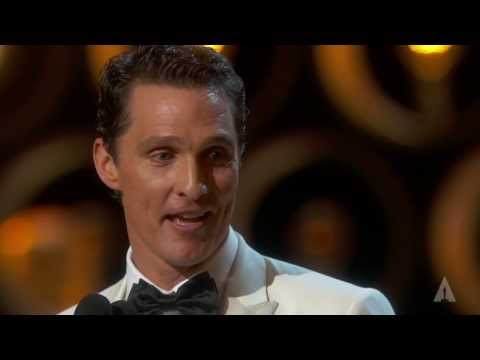 Winning the esteemed award serves as a “pinnacle moment” in his career, he says.

“It meant that for me that as an actor, that as an artist, my product, I was putting out the essence of myself through my characters,” he says. “What I intended to do is what pretty closely was done. There was not a gap.”

Gazing back at all of the greenlights he’s passed in his life, McConaughey acknowledges that perhaps not everyone witnesses quite so many. The concept is relative, he says, and he chases eternal greenlights rather than battery-powered ones that won’t last.

Think about eulogies — the stories people tell when someone is gone, he says. Asking himself what stories will outlive him helps McConaughey live more earnestly, he says.

“I think we are our own aspiration and we should interrogate and investigate ourselves, get to know ourselves as well as possible,” he says. “And in doing so, we will learn and we find out what our own greenlights are.”

This is not a traditional memoir. Yes, I tell stories from the past, but I have no interest in nostalgia, sentimentality, or the retirement most memoirs require. This is not an advice book, either. Although I like preachers, I’m not here to preach and tell you what to do.

This is an approach book. I am here to share stories, insights, and philosophies that can be objectively understood, and if you choose, subjectively adopted, by either changing your reality, or changing how you see it.

This is a playbook, based on adventures in my life. Adventures that have been significant, enlightening, and funny, sometimes because they were meant to be but mostly because they didn’t try to be. I’m an optimist by nature, and humor has been one of my great teachers. It has helped me deal with pain, loss, and lack of trust. I’m not perfect; no, I step in shit all the time and recognize it when I do. I’ve just learned how to scrape it off my boots and carry on.

We all step in shit from time to time. We hit roadblocks, we fuck up, we get fucked, we get sick, we don’t get what we want, we cross thousands of “could have done better”s and “wish that wouldn’t have happened”s in life. Stepping in shit is inevitable, so let’s either see it as good luck, or figure out how to do it less often.

What is a greenlight?

On the road, they are set up to give the flow of traffic the right of way, and when scheduled properly, more vehicles catch more greenlights in succession. They say proceed.

In our lives, they are an affirmation of our way. They’re approvals, support, praise, gifts, gas on our fire, attaboys, and appetites. They’re cash money, birth, springtime, health, success, joy, sustainability, innocence, and fresh starts. We love greenlights. They don’t interfere with our direction. They’re easy. They’re a shoeless summer. They say yes and give us what we want.

Greenlights can also be disguised as yellow and red lights. A caution, a detour, a thoughtful pause, an interruption, a disagreement, indigestion, sickness, and pain. A full stop, a jackknife, an intervention, failure, suffering, a slap in the face, death. We don’t like yellow and red lights. They slow us down or stop our flow. They’re hard. They’re a shoeless winter. They say no, but sometimes give us what we need.

Catching greenlights is about skill: intent, context, consideration, endurance, anticipation, resilience, speed, and discipline. We can catch more greenlights by simply identifying where the red lights are in our life, and then change course to hit fewer of them. We can also earn greenlights, engineer and design for them. We can create more and schedule them in our future—a path of least resistance—through force of will, hard work, and the choices we make. We can be responsible for greenlights.

Navigating the autobahn of life in the best way possible is about getting relative with the inevitable at the right time. The inevitability of a situation is not relative; when we accept the outcome of a given situation as inevitable, then how we choose to deal with it is relative. We either persist and continue in our present pursuit of a desired result, pivot and take a new tack to get it, or concede altogether and tally one up for fate. We push on, call an audible, or wave the white flag and live to fight another day.

The secret to our satisfaction lies in which one of these we choose to do when.

This is the art of livin.

I believe everything we do in life is part of a plan. Sometimes the plan goes as intended, and sometimes it doesn’t. That’s part of the plan. Realizing this is a greenlight in itself.

It’s a matter of how we see the challenge in front of us and how we engage with it. Persist, pivot, or concede. It’s up to us, our choice every time.