Editor's note: This story was rebroadcast on Feb. 1, 2022. Find that audio here.

About 200 miles north of Siberia, the 4-foot waves of the Barents Sea crashed into an expedition boat carrying author Andrea Pitzer, Russian sailors and Norwegian scientists.

The force of the waves was similar to what the Dutch explorer William Barents and his crew experienced when they ventured to the Arctic three times in the late 1500s. Barents was searching for a Northeast polar passage to open up trade from Europe to China.

Pitzer traveled to the Arctic three times herself to research her new book, "Icebound: Shipwrecked At the Edge of the World." She used primary source material on her journeys such as translations of Barents’ ship log and someone else’s account of the first two voyages.

“Piecing together all these little elements and then going there myself using all that, I tried to sort of paint a picture of their whole story,” she says.

Barents sailed north from Amsterdam, over Scandinavia and then east to the Barents Sea, which now bears his name.

In 1594, Barents set out on his first expedition until ice north of the Russian coastline forced him to turn back, Pitzer says. He reattempted the journey the following year and made it a little further south before ice turned him around again.

The first expedition also aimed to determine if the Nova Zembla islands were attached to an unknown polar continent, Pitzer says. During the final expedition in 1596, only one of two ships made it to the long, thin twin islands — where Barents and his team had to stay the winter.

When ice turned the ships around, they sailed around it for days before realizing on Sept. 11, 1596, that they couldn’t make it back home this time, she says. The stranded crew carried their possessions to shore and started thinking about building a cabin when their first major obstacle hit: Their only carpenter died.

Fighting off polar bears as they worked, the 16-person crew built a cabin to call home while stranded in the Arctic for almost 10 months, she says. The crew fought off scurvy by trapping foxes. They dragged sleds for miles to get driftwood to stay alive and lived with an inch of ice on the inside of their cabin.

“It was an unbelievably grueling affair, and they often were their own worst enemies. They nearly poisoned themselves by burning coal in their closed-up cabin. They ate polar bear liver at one point, and their skin peeled off from head to toe. And three of them almost died,” she says. “So it was really a day-to-day battle to live in this place that was not on any map in existence at the time.”

On her journey north, Pitzer walked across the gravel beach that leads to the site of Barents’ cabin. Built on a small plateau, the cabin was exposed to the wind on three sides, she says, and snow piled up over the roof. A polar bear damaged the roof of the cabin trying to get in.

Today, a few logs that formed the rectangular base of the cabin remain, she says. Most of the other remaining artifacts are in various museums, she says, though people sometimes do still find small relics.

“For me, it was really useful to be able to go and stand there and just look out to sea and see the view that would have been just filled with ice at the time,” she says, “that they would come out day after day and realize how far they were from home.”

A Concert For An Audience Of Walruses

Along with encountering polar bears, Barents and his crew also saw walruses. The crew had never seen walruses before but heard their tusks were valuable, Pitzer says.

When the crew saw the walruses at a place called the Orange Islands, they jumped overboard into a small boat and tried to kill as many as possible for their tusks, she says.

The people onboard Pitzer's ship didn’t share quite the same reaction to seeing hundreds of walruses on the same beach that Barents witnessed centuries ago. The team watched in awe as the walruses stared right at them, she says.

Then, one of the sailors started playing a Soviet-era waltz on the accordion. Transfixed by the music, the walruses gathered to hear the concert — one of “the most amazing things” Pitzer has ever witnessed. 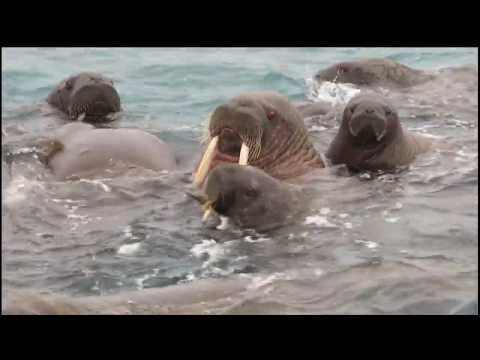 Two weeks later, the dangerous animals sank a boat the same size as Pitzer’s, she says.

Barents’ expeditions resulted in the permanent opening of the high Arctic to Europeans. This resulted in a booming whaling industry in places like Svalbard to the north of Norway in the mid-19th century, she says.

The Lasting Legacy Of Barents’ Discoveries

After Barents’ expeditions, Pitzer says it became clear that more countries would start exploring as the whole world fell under the “boot heel of colonialism” — which would later spark the Industrial Revolution and the climate change issues the Arctic faces today.

From her three trips, Pitzer says she’s already noticed many changes to the region. On her first expedition, an ice cave that was hundreds of years old caved in while it rained outside.

“We were briefly trapped a little bit,” she says. “It wasn't anything too serious, but we were all aware that it's not supposed to rain in the Arctic in January.”

On her second trip, Pitzer saw plastic trash all over the Arctic shores. Then on the third trip, she saw an island that humans didn’t know about until three years ago when a glacier retreated beyond it.

“It was really concrete ways, not just temperature, but the results of those temperature changes,” she says.

In August, Pitzer is heading back to the Arctic once again. She’s been studying Russian and cold-water diving to prepare to set off on a boat as a sailor.

In the next few years, she hopes to return with stories about the region’s past that convey the lasting impacts of legends such as Barents — and teach that turning people into legends isn’t the healthiest way to view history.

As the expedition left behind the realms of even indigenous Arctic peoples and made its way into lands unsuitable for human habitation, the calendar showed that William Barents and his men were six weeks out of Amsterdam. Beset by fog, they entered a fjord and noticed movement. They saw something they’d never seen before. They recognized it as a bear, but it was a white bear. An enormous white bear swimming in the water.

Barents and some of the sailors jumped from the ship into their small boat. They had the idea that they’d try to take the bear back to the Netherlands with them and show it as a foreign wonder. Loading a musket, one of the sailors shot the bear full in the body. It reared up and began to swim off. The crew chased the animal, with several men rowing to close the distance while one managed to swing a lasso and rope its neck. Dragging the creature back toward them, the men pulled it along in their wake.
Barents had no prior experience with polar bears to prepare him. But he and his men would not be the only explorers to feel the impulse to capture a bear and bend it to their will. Even after the fierce nature and strength of polar bears was widely known throughout Europe, twentieth-century polar explorer Roald Amundsen asked the director of the Hamburg Zoo to transform polar bears into pack animals capable of pulling sleds on a polar expedition. Fellow explorer Fridtjof Nansen thought the plan worth attempting but remained dubious about its feasibility. It seemed more likely that polar bears hauling on real ice would soon sense their power in their home environment and revolt.

Any optimism William Barents felt watching the first polar bear he’d ever seen was even shorter-lived. The lassoed animal roared and continued to fight, despite having taken a direct shot to the body. Though the Dutchmen didn’t yet see their full danger, they quickly realized the creature’s power. Revising their earlier fantasy, they decided it would be safer to kill and skin the animal than to keep it as a pet. While the bear fought to free itself, the sailors let the rope play out to hasten their quarry’s exhaustion.

From time to time, Barents goaded the bear with his boat hook. After a while, the animal paddled up to the stern of the boat and gripped the wood with its forepaws. Thinking the creature wanted a break from the struggle, Barents called the men’s attention to it, predicting, “She will there rest herself.”

The bear, perhaps sensing that it was in its own element, didn’t rest on the ledge. Instead, the animal heaved itself up and climbed halfway into the boat. The sailors fled to the other end of the craft in terror. But the far end of the noose they’d put around the bear’s neck caught under the rudder and leashed it in that vulnerable position, half in and half out of the boat, choking. The bear was trapped, not yet helpless but unable to close the distance with its attackers.

Realizing their luck, one of the sailors made his way from the front of the boat and gored the animal with a half-pike. The bear collapsed into the water and dragged the boat for a time. Once the creature grew tired, they beat it to death. Hauling the animal into the boat, they began skinning it. The first polar bear the Dutchmen encountered would, in time, make its way to Amsterdam after all. The sailors named the place Berenfort for their conquest.

From there they went on to the next bit of floating land in the tiny archipelago, where they left the ship once more. Taking their small boat to shore, they hiked through the cliffs and rocks up a hill to find a pair of large crosses on high. They weren’t quite past the bounds of history after all—at least one ship had been here before them. They christened the site Cross Island, and moved on, mapping and naming as they went.

Heading north, it was the last sign of human life they’d see. Going to sea can be challenging enough with a plotted course and an endpoint in mind. Sailing day after day without a map into unknown territory is a completely different experience. It’s impossible to know which kinds of shores, or what animals, wind, and weather may appear next. Any given tomorrow might have brought Barents or his men within sight of an open sea beckoning them to China. Or they might have worked their way north against ice and snow month after month until they came to the top of the world—the first humans to arrive at the North Pole. Or the sea might have risen up and swallowed them whole. They had to continue on without knowledge of their destination or how long it might take to get there.

The solstice marking the longest day had passed, but real darkness wouldn’t return for months, when the tables would reverse and polar night would begin to creep in. That summer in full sunlight, standing on the shores of Nova Zembla, William Barents had no reason as of yet to ponder the possibility that he might ever be away from home long enough to discover what it felt like when light gave way to endless darkness.

Excerpted from Andrea Pitzer’s book "Icebound: Shipwrecked at the Edge of the World," published in January 2021 by Scribner.