What's it like to raise a child silenced by cerebral palsy? Dr. Steven Gardner details that journey in a new memoir about his son Graham.

"Jabberwocky: Lessons of Love from a Boy Who Never Spoke" refers to Camp Jabberwocky, where Gardner has volunteered as a physician for 25 years on Martha's Vineyard in Massachusetts.

In the new book, Gardner explains that he and Graham's mother, Cynthia Gardner, worried as they realized they would have to assist Graham — who could neither speak nor move his limbs — with everything. But then came Camp Jabberwocky, where Gardner realized Graham could do just about everything — wind sailing, skiing, swimming — with a little bit of help.

In 2010, the Gardners took Here & Now’s Robin Young to Camp Jabberwocky. This was their first summer at the camp without their beloved son, who died the previous winter at 22. 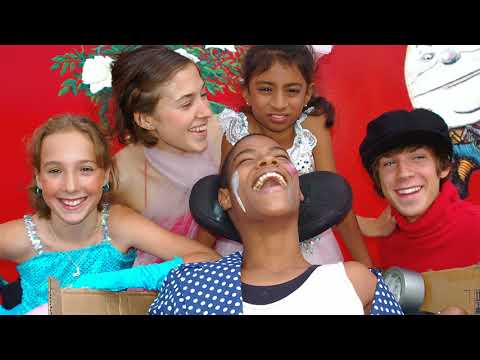 Now divorced, the Gardeners are devoted to Graham’s memory and this community. The book chronicles the almost mystical relationship the couple had with their son, who a stranger once said had “the light of God in his eyes.”

Cerebral palsy is a group of disorders that affect a person’s ability to speak and walk, says Gardner, an internist at Massachusetts General Hospital and assistant professor at Harvard University. The injury to the brain that causes the disease can happen during pregnancy or delivery.

Graham had a severe case of cerebral palsy, and his parents showered him with love and constant conversation. His mother, a stylist, dressed Graham to the nines and pushed local schools to let him attend.

In the beginning, Gardner says he worried whether his son never would do things like ride a bike. As Graham got older, his father realized he would need to help his son with everything.

“But we also began to realize that just the time being together with this special boy was quite poignant and wonderful. And then later on, when we found this magical summer camp, Jabberwocky, we further rethought how we think about ability,” he says. “And everything changed after that.”

In describing how Graham — who couldn’t speak — responded to his parents’ efforts, Gardner recalls a quote from Winnie the Pooh: “‘How do you spell love?’ asked Piglet. ‘You don't spell it ... you feel it,’ replied Pooh.”

“It's not something that I think we could explain very well verbally. It was more something we felt radiating from Graham — benevolence and goodness,” Gardner says. “It was unmistakable. I suppose it came to us mostly through his eyes.”

In school, teachers came up with the idea of assigning a designated driver to push Graham around. Years later, the same kids showed up at the hospital when Graham fell ill at age 12. Gardner says he’s “stunned” at the compassion and strength kids showed his son.

The culture of Camp Jabberwocky inspires Gardner to recall a quote from another modern philosopher, Mr. Rogers: “The only thing that ever really changes the world is when somebody gets the idea that love can abound and can be shared.”

“[Lamb] might have had the idea that laughing and being silly and being whimsical maybe was even more important than love, challenging one another with activities that they haven't tried before,” he says. “They regard one another with open hearts and open minds.”

Now, campers and their families use the term “Jabberwocky love” to describe the phenomenon, he says.

The highlight of the summer for Camp Jabberwocky is the Fourth of July parade in Edgartown on Martha’s Vineyard. On this day in 2010, 96-year-old Lamb explained that she founded the camp decades ago because she saw disabled young people being kept in back rooms.

“I have been into many houses and even today they have a special room for them and they spend mornings, afternoons, evenings, nights in that room,” Lamb said. “And that's what I want to stop.”

Lamb’s hopes for Camp Jabberwocky were for it to “keep on growing,” she said. She died at her home in Oak Bluffs the following summer. Gardner questions why the whole world isn’t more like the camp Lamb created.

Graham wind sailed, skied and biked the 40-mile Pan-Mass Challenge with his father. The families of Josh Lilley, whose father Ross Lilley founded Access Sports America, and Rick Hoyt, who ran with his father Dick Hoyt in the Boston Marathon for 30 years, were “pioneers” in helping the Gardners realize how much their son could do, Gardner says.

And the Gardners always knew these activities brought some level of risk.

“But I think we felt that if we didn't try things that were challenging, that Graham would end up, as Mrs. Lamb said, sort of languishing indoors,” he says. “There was an element of risk. That's true. We just decided we were willing to take that risk.”

One day, Gardner and Graham went for a swim at the local YMCA, as the duo often did. But this time, Graham had a seizure and died.

“As a physician, you know, I always worried that something bad might happen to him when I wasn't with him like a seizure. And so I had to deal with this irony that he passed away when I was with him and trying to help him,” Gardner says. “That was a sort of a bitter pill to swallow.”

Friends and strangers sent around 1,500 condolence cards to the family after Graham’s death, his father says. At only 22 years old, Graham had touched more people’s lives than his parents thought possible for someone who never spoke.

People stood up and spoke at a celebration of Graham’s life, which drew 750 people. His music teacher from the Crotched Mountain School in New Hampshire called him a “spiritual master,” Gardner says.

And that final visit to the pool wasn’t the last time Garnder felt his beloved son’s energy.

“I think the existential question many people ask when they lose someone they love is, will I get to see them again in some sort of energy?” Gardner says. “Cynthia and I were walking after celebrating Graham's life at Jabberwocky. All of a sudden the night around us was illuminated and we were surrounded by thousands of fireflies. I took it as a sign.”

Robin Young produced and edited this interview for broadcast with Todd Mundt. Allison Hagan adapted it for the web.

Buying presents for Graham’s counselors was peculiar in a way
because, like all the volunteers at Camp, they expected nothing in return
for their efforts. They unpretentiously embodied Emerson’s notion that
“the only true gift is a portion of thyself.” The one reward they hoped
for was to see their campers smiling and laughing. Fully understanding
that, my hope was that wearing the whimsical bracelets would remind
Graham’s counselors that what they gave him will never be lost and that
a portion of Graham remains in each of them.

Walking up to Beadniks to collect the finished bracelets a few days
later, I found myself smiling at a vivid memory from exactly a year earlier,
Graham’s last summer at Camp. It was a vignette that perfectly epito-
mized the experiences he shared with his counselors over the years. The
incident occurred on our last day on the island, during a sudden torren-
tial downpour, the kind that causes flash flooding.

I was driving up Main Street in Vineyard Haven, past the ice cream
shops and ancient movie theater, windshield wipers oscillating furiously,
when I happened upon Jackie and Kaitlin, Graham’s counselors at the
time, frantically wheeling him in the direction of Camp. They had been
caught in the sudden cloudburst. Jackie and Kaitlin had removed their
jackets and were holding them like a tent over Graham while they were
pelted by enormous drops of rain falling almost as violently as hail. I
pulled alongside the threesome and, through a wall of water, asked if they
wanted to get in the Jeep with me and ride back to Camp.

As they ran up Main Street in the direction of Camp, the two counsel-
ors pushing frantically on either side of Graham’s wheelchair, drenched
as thoroughly as if they had jumped in the harbor, Jackie, Kaitlin and
Graham were—naturally—howling with laughter.