Reginald Dwayne Betts, a celebrated lawyer poet from Maryland, can now add MacArthur Fellow to his list of accomplishments.

But before all of those achievements, Betts was a 16-year-old boy serving an eight-year sentence in prison for a carjacking.

It was during his time in prison that someone slipped a book, “The Black Poets,” under his cell door. The contents of that book blew his mind.

Now more than 20 years later, he's offering inmates that same experience by establishing "micro-libraries" in prisons throughout the country through his nonprofit Freedom Reads.

Betts says being awarded the fellowship, also referred to as the “Genius Grant,” is about as “surreal” as ending up in prison. In both cases, he says his actions influenced where he ended up.

A book written by Black poets was the last thing teenage Betts expected when asking for something to read while in prison, but the contents of those pages shifted everything for him. 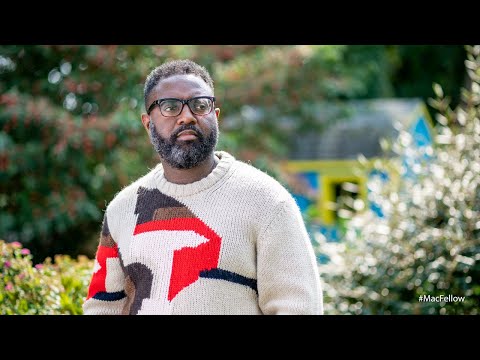 Overcome by loneliness in his cell, Betts devoured the poetry of Etheridge Knight from the 1960s. Knight, author of “Poems from Prison,” details his own experience as once a teenager in prison.

Betts says as he turned the pages, he finally felt seen.

“I spent a lot of time in prison trying to name myself something,” he says. “And it was that moment that I decided to name myself a poet because I believed it would give me a way to hold on to something in the world.”

He also read “cutting greens” by Lucille Clifton — a poem about chopping kale and collards in the kitchen and realizing “the bond of live things everywhere.”

“I felt so desperately alone,” he says, “and I'm reading these lines thinking — I think I could do that.”

While he was speaking into existence that he was a poet — he hadn’t actually put pen to paper with any poetry. And Betts says if he had known how difficult poetry was, he would have just remained a consumer.

His first attempts at poetry were writings about depression, the people around him and love. But the poem he remembers the most — ironic now, he admits — was about making something of himself in the world.

“It was the first time I wrote something that I thought was really good, and it was about the desperation to become anything,” he says.

People in prison don’t really know what’s going on on the outside, he says, and the stories of successful former felons don’t make it back to the cells.

Now Betts has founded Freedom Reads — based not only on the autonomy of writing and reading behind bars, but the freedom that comes with books themselves.

A friend once asked Betts if a customer could sue McDonald’s if they slip and fall in the restaurant with a wet floor sign present. Betts said yes, and the friend proceeded to pull out a book and tell the poet why he was wrong. Bett’s response to the situation was to take a paralegal course.

As a defense attorney, he says he’s come across many situations where he’s utilized his knowledge as an avid reader and writer to argue for his client’s freedom.

“I think in a real way, freedom begins with a book. The reason why I was able to engage in those ways was because I had spent all of this time literally just reading books, imagining that it wasn't just a fanciful place that they were taking me, but I was learning something about being in the world that I didn't fully know,” he says. “Because if I would have known it at 16, I wouldn't have carjacked somebody.”

Betts graduated from Yale Law School and was sworn into the Connecticut bar a few years ago. He specifically identifies as a lawyer poet — lawyer used as an adjective to describe poet — to fuse those two worlds of freedom and truth-telling together.

When Betts was released from prison, he worked at a bookstore in Maryland where he started a book club for Black boys. One group was six to 11 year olds and the other was 12 to 18 year olds. The older group once read “Fences” by August Wilson, he recalls, and fathers of the boys came in to discuss.

“Fences,” a play that examines race in the ‘50s, animated a conversation that delved into themes relative to these young boys’ lives, he says. “And we had conversations that I had never had,” he says.

Shame made it difficult for Betts to publicly let people know he had spent a third of his life in prison. He says he was also afraid of being denied jobs and opportunities. He also faced another obstacle — starting over after prison.

Betts possessed a fire within him — on his way into prison and as he exited — to prove people in the criminal justice space wrong and show his mother that he was more than the crime he committed.

“I find myself tearing up,” he says, “mostly because I remember how it's harder to watch a child be sentenced than it is to be the child and to be sentenced.”

His time served in prison — and knowing what it must have been like for his mom — weighs on him throughout challenges and successes like receiving the MacArthur Fellowship, he says.

He’s still trying to fill more successes into his jar, he says, “to make up for the other thing.”

At two a.m., without enough spirits

spilling into my liver to know enough

to call my tongue to silence, my youngest

learned of the why of the years I spent

inside a box: a spell, a kind of incantation

I was under; not whisky, but History:

As a teenager, I robbed a man. I’d tell him

Months before he would drop bucket after

bunch five and six & he leaping as if

every lay-up erases something. That’s how

I saw it, my screaming-coaching-sweating

presence recompense for the pen. My father

has never seen me play ball is part of this.

My oldest son knew, brought into this truth by

a stranger. Tell me we aren’t running

towards failure is what I want to ask my boys,

but it is two in the a.m. The oldest has gone off

to dream in the comfort of his room, the youngest

despite him seeming more lucid than me,

just reflects cartoons back from his eyes.

So, when he tells me, Daddy it’s okay, I know

what’s happening is some straggling angel,

lost from his pack finding a way to fulfill his

duty, lending words to this kid who crawls

into my arms, wanting, more than stories

of my prisons, the sleep that he fought while

I held court at a bar with men who knew

that when the drinking was over,

the drinking wouldn’t make the stories

we brought home any easier to tell.

For a Bail Denied

I won’t tell you how it ended,

& his mother won’t, either, but

beside me she stood & some things

neither of us could know. & now,

all is lost; lost is all in the ruins

of what happened after.

The kid, & we should call him kid,

call him a f***ing child, his face

He walked into court a ghost, &

his nappy head made him Blacker

than whatever pistol he held,

whatever cell in the hole awaited;

the prosecutor’s bald head was Black

or brown, but when has brown not

been akin to Black here? To abyss

& does it matter (Black lives),

if all the prosecutor said of Black boys

was that they kill? The child beside

I’m not his father, just a public

defender, near starving, here, where

into numbers, searching for something

useful, for angels born in the shadows

of this breaking. This boy beside me’s

withering on the brink of life

& broken & it’s all possible, because

& everyone in the room wanted a mask.

The boy’s mother said: This ain’t

justice. You can’t throw my son into

that f***ing ocean. She meant prison.

& we was powerless to stop it.

& too damn tired to be beautiful.

Samantha Raphelson produced and edited this interview for broadcast with Todd Mundt. Serena McMahon adapted it for the web.