Country singer Trisha Yearwood lost her sense of taste and smell when she got sick with COVID-19 — which poses an acute problem for a cook.

Yearwood’s Emmy-winning Food Network TV show "Trisha's Southern Kitchen" returned for a new season this month. And her new cookbook, "Trisha's Kitchen: Easy Comfort Food for Friends and Family,” is out this week.

Rest assured, Yearwood says she wrote the book before she caught COVID-19. Several months after her mild infection, her senses are still coming back.

“I got the call that I could get the vaccine about a week after I had COVID. I just missed the window,” she says. “I know I had made it so far, but I feel very lucky to be healthy.”

At first, Yearwood lost her sense of taste and smell entirely. When her senses began to return, some foods were different from what she remembered.

“Things that I love, like the smell of onions and garlic cooking in a pan, I couldn't handle it,” she says. “The smell was not good and not a smell I could even describe. It's a very metallic kind of petroleum burnt weirdness.”

Her taste for sugar came back first, so she started eating a lot of fruit. Months later, Yearwood says she’s still having an altered experience with certain foods.

Garth Brooks, Yearwood’s husband, refused to quarantine away from his sick wife but managed to avoid getting sick, she says.

“He truly proved to me that he is Superman,” she says.

Brooks wrote all the forewords for her previous cookbooks, but this one marks the first time he’s appeared in the lifestyle photos within the book.

Yearwood starts the book with a captivating line: “It was 1998 and I found myself sitting in Maya Angelou's kitchen watching her carefully bred fresh catfish in cornmeal.”

While on tour with Brooks in North Carolina, where Angelou taught at the time, Yearwood got invited to lunch at the prolific poet’s home. Yearwood suspected that the call was a trick or a mistake, but it wasn’t.

Angelou listened to Yearwood’s music and loved the story of the song “Walkaway Joe,” the singer says. The poet recited the lyrics of the song, making a “rhythmic” gesture with her hands, Yearwood recalls, and then proceeded to make the pair lunch.

Yearwood made a new friend that day — and she also recognized the power of food and music in relationships.

“To me, I think it solidified how we think that when we sit down to eat, we're just sitting down to eat. But it can be and should be so much more than that,” she says. “That connection of sitting at a table together and having a conversation is as important as the food itself.” 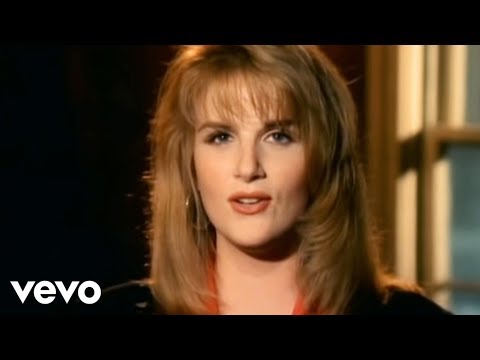 Before bed during the pandemic, Yearwood found herself wondering about new cooking innovations, like if she could figure out what’s inside Oreos and put it between two brownies.

Now that she’s cooked all of her family recipes, Yearwood is reinventing these classics with recipes such as her Chicken Pot Pie Burger. She cooks the chicken burger with all the vegetables that go in a pot pie and pours the gravy over the bun.

“It tastes just like mom used to make,” she says, “but it's a burger.”

But Yearwood isn’t out of classic family recipes just yet.

Yearwood and her sister, Beth Yearwood Bernard, often talk about their maternal grandparents who owned a dairy farm and cooked every day. Grandma Yearwood didn’t cook quite as often but she made family-favorite desserts, Yearwood says. The sisters discovered a cookbook that included a handwritten recipe for Grandma Yearwood’s fried pies.

“We just lit up because it's never been in a book and we didn't even know where the recipe was,” she says. “Our dad used to always talk about his mom's fried pies.”

The sisters renamed the recipe Jack's Fried Pies after their father and worked hard to figure out the exact ingredient measurements. Yearwood Bernard says they’re keeping the generations that came before them alive in the kitchen.

Yearwood wrote her first cookbook when she moved to Oklahoma with Brooks and their daughters, her sister says. The singer didn’t cook much until Yearwood Bernard’s daughter Ashley Bernard gave her a collection of family recipes to try after the move.

“[Yearwood] just became fearless. And she just became this person who will try anything and cook anything,” Yearwood Bernard says. “And now she's teaching us.”

My dad, Jack, used to reminisce about small fried apple fritters that his mother, Elizabeth, would make for him when he was a kid. Of course, like many passed-down family recipes, this one wasn’t written down anywhere, so Mama went to work, trying to figure out how to make them just like his mama had. That’s never an easy job, because our childhood memories often make those original flavors impossible to replicate. Beth and I remember those premade dough pockets sitting on the kitchen counter, and Mama frying them up in a castiron skillet. We also remember how happy Daddy was with the result. We’re not surprised she got it right! Grandma Yearwood always fried with lard, but if that scares you, vegetable oil is perfectly fine!

Trisha’s Tip: The apple filling can be made the day before and stored in the refrigerator until ready to use.

This burger just might become one of your family favorites. It combines all the savory vegetable flavors of my mama’s classic chicken potpie and puts it on a bun. The sweet English pea gravy takes this dish home. It’s truly incredible to bite into this burger and taste all the flavors of a perfect potpie. It’s a comfort burger!

Excerpted from TRISHA’S KITCHEN: Easy Comfort Food for Friends and Family © 2021 by Trisha Yearwood with Beth Yearwood Bernard. Photography © 2021 by Ben Fink. Reproduced by permission of Mariner Books, an imprint of HarperCollins Publishers. All rights reserved.