The new film "Passing" looks at an age-old issue in the Black community: lighter-skinned Black people "passing" in society as white.

Tessa Thompson plays Irene, or "Reeni," who identifies as Black and lives in Harlem in the 1920s. Reeni runs into an old friend named Clare at a restaurant but doesn't recognize her at first. Clare, who is played by Ruth Negga, is pretending to be white yet dearly wants to start up their friendship again.

"Passing,” which drops on Netflix Wednesday, is the creation of English actor, writer and director Rebecca Hall. She shot the film in black and white and adapted the screenplay from the 1929 novel by Nella Larsen.

Larsen's book resonated deeply with Hall’s own family history. Hall first read the book 13 years ago at a time when she was trying to make sense of the mysteries surrounding the racial identity of her mother’s side of her family. 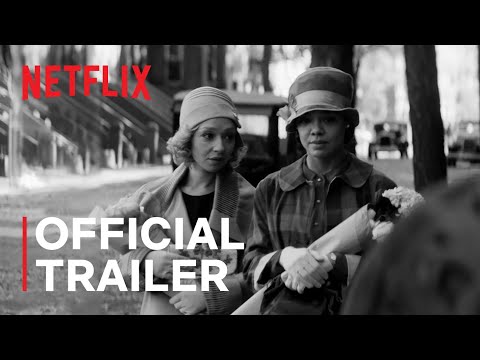 Her grandfather was Black but passed for white for most of his life in Detroit, Michigan, between the 1930s and 1950s. The book helped her understand how her grandfather fit into the history of passing.

“This explains why my mother doesn't have access to so much of this stuff and doesn't know her father's relatives,” she says. “All this mystery and secrecy around something, it sort of makes sense that that is born out of passing.”

For Hall, Larsen’s book is about far more than passing. It’s about how gender, sexuality and motherhood intersect with race — which makes the book ahead of its time, she says.

The book was celebrated when it was published, but a lot of people didn’t get it at the time. Now, Hall says society is more equipped to have a nuanced conversation like this one.

“A lot of passing narratives sort of draw attention to the construct of race and the slippery reality of a lot of these categories and the limits of them,” Hall says, “and how the truth about being human is that we're messy and we spill out of the confines of being reduced to one single definition.”

On Hall’s suspicion that her mother was a Black woman

“You have to sort of put this in context. I was growing up in the English countryside with an American mother. I mean, there was already a sense that she was different anyway, but I would notice that people would use words like exotic to describe her, which I always was slightly uneasy with. But I myself would look at her and think that she looks to me like a Black woman. And she did experience incidents of racism when she was a kid, which, as you can imagine, must have been incredibly confusing for her when she had not been told or given any sense of pride in that identity or even understanding of that identity.”

On how the film lays out that Black people are most often able to identify people who are passing, while white people don’t

“I think it sort of reveals how context plays a part in all of this and also how power plays a part in all these things. You know, part of the creative luxury of shooting in black and white is that it allowed me to, in essence, make that scene oppressively white. Like the walls are white, the costumes are white, the light is very overexposed, coming in from, you know, a practical window, but still sort of almost unnaturally white.

“I suppose what I was getting at is this racist man doesn't see them as Black because he's dumb or unobservant, and it's because he has the power to make the context. And in this world, it's his world. It's a white domain. And so he has the power to see what he wants to see. But it was always interesting for me to make sure that the audience sat in a different perspective, which is that they're always seeing them as Black because an audience has a fixed understanding of the identities of Tessa Thompson and Ruth Negga as Black women.”

“The touchstone of the book is ambiguity and economy. There is nothing entirely said because these characters — it's not really available to them. It was very important to me because of that sort of sense of economy and ambiguity to never tell the audience what to think. Because I think the more that you engage and bring your own narratives, your own sense of your own identity to this story, the more you get out of it like it works with you. And if you sit back and just take it at no pun intended face value, then you don't necessarily get the rewards. But whoever you are, I think, will interact with the movie and you will get something of that out of it.

“In terms of the restraint of those performances, it's the brilliance of those two actors. They're extraordinary. And certainly, I was very aware of catching moments where one of them is looking at the other and the other isn't aware of it. So there are these moments of private observation and scrutiny that reveal things about them. Ultimately, I think the stories about the struggle that any of us have about the person that we think we ought to be and the person that we actually want to be like, how much freedom do we have to work out what we even want to be?”

“While it is an overt part of the story, it's just how we shot it wasn’t overt I suppose is the truth. I mean, the story is, in essence, a woman having a breakdown who isn't even aware that she's having one. So I had to approach it with a certain amount of delicacy. First and foremost, there is the brilliance of Tessa Thompson. It's an extraordinary performance and nigh an impossible thing to do with that amount of restraint. And, you know, not being allowed to cry is often a lot harder than crying.

“But beyond that, there are kind of motifs in the movie that I think undergird visually. That sense of crumbling, like the house is literally crumbling. You know, there's a crack in the ceiling that looks different to her husband than it does to her. And then she sees it again. It looks even larger. She comes down the stairs and we see something from her perspective, and it looks one way and then she turns a corner and you allow the audience to see that she's not seeing clearly because actually, it looks completely different. All of these signifiers, I think, are ways of clueing the audience that the person that you think you are trusting, the person whose eyes through which you were seeing the story, is unstable. She's falling apart.”

On talking about the film with her family

“It sparked conversations on both sides of my family, both my maternal side and paternal. You know, a lot of my relatives in England were sort of surprised, not that I haven't spoken about it to them. I had actually, but I suppose all of them are a little, you know, just to see it so clearly laid out on screen or me talking about it publicly does generate a different kind of conversation. And certainly with my mother, it's been huge for her. I don't think that was really a way to comfortably talk about all this before. And now there is. I hope on some level there is.”

Emiko Tamagawa produced and edited this interview for broadcast with Peter O'Dowd. Allison Hagan adapted it for the web.