This month Metro — along with its adjoining dance club Smartbar — celebrates 40 years in business. Metro opened its doors in 1982, spotlighting alternative rock, punk and metal. Since then the Chicago venue has remained an independent outlet for thousands of bands spanning just about every genre.

Gene Ambo has also seen a lot of shows here, but from a different vantage point — looking through his camera’s viewfinder. Ambo says the first band he remembers seeing at Metro was Motörhead.

Ambo has published a photobook of some of his favorite shots from the club over the past four decades called "Heavy Metro: Access All Eras."

Today, Ambo’s concert photography and portraits of musicians are known around the world. But he started out shooting his friends’ metal bands without a press pass, “with just enough money for cheap beer,” he says.

“I would come to shows with one roll of film, 12 exposures, and I had to count the exposures to know what I was doing if I wanted to shoot both bands,” Ambo says.

Metro owner Shanahan says his early days of booking and putting on shows in the 80s were “lean and mean,” too.

“We would buy literally what we needed to exist for a show per day,” Shanahan says.

Early shows from bands like R.E.M., Bad Brains and Black Flag helped establish the venue as an independent outlet for music that wasn’t yet appreciated by radio audiences.

“People wanted to find out new things, and Joe was the guy bringing stuff that we didn't know about,” Ambo says.

Shanahan puts it this way: “We were a melting pot of misfits.”

One legendary show from those early years was Metallica on Aug. 12, 1983.

“It was a pivotal show, a pivotal moment for Chicago. We realized that this band was going to be massive,” Shanahan says. “I mean, it was like a jumbo jet landing, and everybody was looking around at each other going, ‘Oh, my God.’ ”

One of Ambo's most evocative photos of that show captures a moment in lead guitarist Kirk Hammett's solo.

“[Hammett] leans out to the crowd to get involved and kind of do this thing,” Ambo says. “And typical Chicago, they just stole his guitar! Just took it right off his back and it disappeared in the crowd.”

A roadie wearing a muscle shirt that says “ROAD DOG” jumps into the crowd to retrieve Hammett’s Flying V guitar. 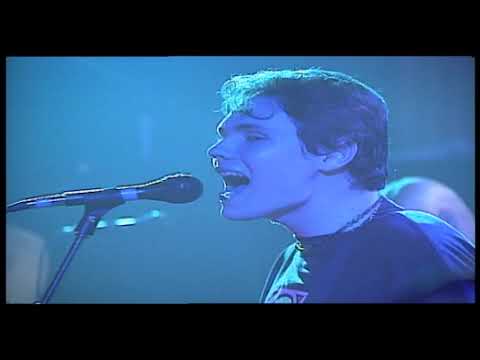 Metro was also a launching pad for The Smashing Pumpkins, whose frontman Billy Corgan was a frequent visitor.

“When I think about what Corgan has done for this room,” says Shanahan. “He always called this his psychic temple. He would come here and listen to like My Bloody Valentine and say, ‘Oh, that's an interesting sound.’ ”

Another memorable act was Iggy Pop, whose Blah-Blah-Blah tour show Ambo calls “one of the wettest, sweatiest, bloodiest shows” he’s ever seen.

“I remember I was just melting in my gym shoes,” Ambo says. “There was so much blood and sweat and beer on the floor.”

Shanahan remembers Iggy Pop trying to rip out the speakers on stage and throw them into the crowd.

“He actually lifts the cabinets off the floor!” Shanahan says. “I mean, he was trying to move something that's not quite movable. Plus it was strapped down, which he didn't know.”

Ambo says he strives to capture the energy of those raucous shows by blending in with the crowd.

“You had to really be stripped down. You couldn't carry all your stuff,” he says. “I would just kind of watch what was going on with the crowd and whenever I had a chance, I'd just drag a chair in the middle of the floor and stand up for a couple of minutes and blast a few shots.”

Shanahan says the Metro has lasted 40 years because of the fans and the venue’s staff.

“The staff here has always been like-minded: Music first, and really enjoying what we do for a living, but working very hard,” he says. “We really created a community and it's come full circle. It is not nostalgic as much as it is a testament to survival.”

Last summer, the Metro emerged from a 17-month pandemic blackout. One of the first bands back on stage was Metallica, who returned after 38 years for a show to benefit a local food pantry.

“I am absolutely humble and grateful,” Shanahan says. “We are an arts and music driven community, and thank God we were able to knock on those doors and get recognized because otherwise we would not be sitting here … And we're going to continue to be here.”

During the pandemic shutdowns, Shanahan helped organize venue owners and artists to lobby for federal relief. Now, some of the money from Ambo’s book will benefit the Chicago Independent Venue League. For Ambo, the new book commemorates Metro’s place in music history.

“It's a big part of what the city is. All the people who have come through here all have that one sharing bond that we know this place and are proud to be around it,” Ambo says. “Everybody wants to be here, you know? So I'm just lucky that I was.”