A new PBS documentary is celebrating the life of Ramon “Chunky” Sanchez, a transcendent musician and activist who rose to prominence during the Chicano civil rights movement.

“Singing Our Way to Freedom” explores Sanchez’s rise to fame in the 1960s and ‘70s. As part of the civil rights movement, Sanchez played at rallies and marches, garnering the praise of influential figures in the movement like activist Cesar Chavez and singer-songwriter Joan Baez. 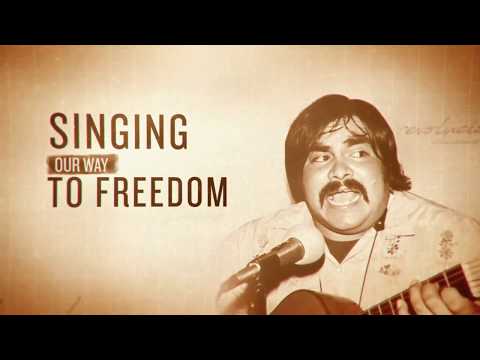 Director Paul Espinosa says Sanchez grew up along the U.S.-Mexico border as the child of Mexican immigrants. Sanchez worked in the fields and had the opportunity to meet Chavez when the leader visited Blythe, California. In the documentary, Sanchez speaks about that pivotal moment.

“It was very dynamic. [Chavez] was calm, but yet he was powerful. The way that he delivered the things that he was talking about, everything made sense,” Sanchez says. “It was like he was opening your eyes about very simple things that we always took for granted.”

Growing up, Sanchez only spoke Spanish. In school, his teachers would change his name from “Ramon” to “Raymond.” Other students had their names changed, too; “Maria” became “Mary,” and “Juanita” became “Jane.”

In his music, Sanchez would sometimes sing in both English and Spanish. In his song “Pocho,” Sanchez sang about the derogatory term used by Mexicans to describe Mexican-Americans who don’t speak Spanish well.

When people asked Sanchez what it meant to be a Chicano, or person of Mexican descent born in America, he would often respond it’s a state of mind or heart. For Sanchez, being Chicano was more about consciousness than where someone was born, Espinosa says.

“I think from Chunky’s point of view and certainly other people, being Chicano is about having an awareness about the kind of the social and political and cultural situation that you find yourself in,” Espinosa says. “You don't have to be ‘Mexican-American’ or Mexican origin to be Chicano.”

Soon Sanchez and his group traveled with Chavez and perform at rallies and demonstrations all over California and the Southwest. Chavez understood the power of music, Espinosa says, and would bring Sanchez to play music during the rallies to get people inspired.

In the modern protest movement, Sanchez’s music is still relevant. Sanchez continued to play music right up until his death in 2016 and helped pass the baton to younger musicians. There’s political and social awareness about what music can do in Latino communities, Espinosa says.

“I think people definitely see the power that music has to uplift people and speak to their hearts,” he says.

Samantha Raphelson produced and edited this interview for broadcast with Catherine Welch. Jeannette Muhammad adapted it for the web.