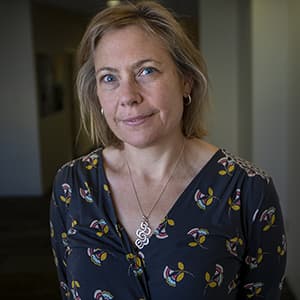 Barbara Moran is a correspondent on WBUR’s climate and environmental team.

Moran grew up in Hudson, Mass., attended the University of Notre Dame, then got her master's in science journalism from BU. For 25 years, she has worked as a science journalist covering public health, environmental justice and the intersection of science and society. She has written for many publications, including The New York Times, New Scientist, Technology Review and the Boston Globe Magazine, and produced television documentaries for PBS and others. Her first book, "The Day We Lost the H-bomb," was an Amazon pick of the month, and described as “riveting” by the Washington Post. She was a Knight Fellow at MIT, and was twice awarded the National Association of Science Writers’ highest honor, the Science in Society Award.

At WBUR, Moran focuses on climate science and climate solutions, with as many quirky animal stories thrown in as possible.

When not obsessing about climate change, Moran spends time swimming, hiking and visiting Civil War battlefields with a bunch of retired military guys (long story). She spends the rest of her time wrangling her two sons, who take up all the couch space and rarely pick up their socks.