One of the four ballot questions Massachusetts voters will decide on this November seeks to put an end to what advocates call "cruel confinement" of calves raised for veal, breeding pigs and egg-laying chickens — along with the sale of products from those animals.

For animal rights activists and their supporters, Question 3 rides the wave of an expanding “cage-free” movement. But opponents are concerned that the question's passing would create unintended consequences not necessarily on the minds of voters who aren’t intimate with farm life and the agricultural industry. 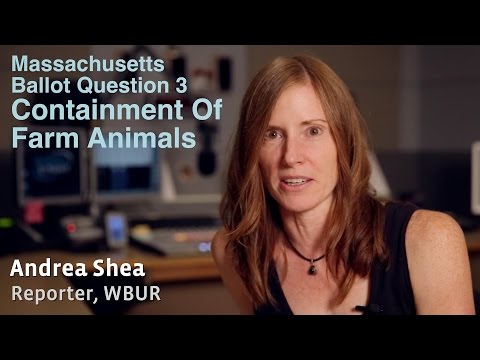 The Arguments For And Against

Cute pictures of baby pigs adorned posters in the Yes On 3 headquarters, where staff members made phone calls to rally troops. The MSPCA supports the measure and is letting the ballot initiative's backers use a small office at Angell Memorial Medical Center in Jamaica Plain.

With help from hundreds of volunteers, the Humane Society of the United States and an organization called Citizens for Farm Animal Protection won placement for Question 3 on the state ballot.

“A yes on 3 is a vote for cage-free, so it’s about giving farm animals enough space to turn around and extend their limbs -- it's that modest," explained Stephanie Harris, Yes on 3's campaign director and head of the Massachusetts Humane Society.

That idea appears to be popular with voters. A recent WBUR poll shows 66 percent of respondents support Question 3. And Harris says 100 family farms have signed on.

If it passes, the law would eliminate the use of confining cages and crates for breeding pigs, calves raised for veal and egg-laying hens. For instance, Harris says egg-laying birds are often relegated to an inhumane life in battery cages the size of an iPad.

“In Massachusetts there are more than 3,000 hens that are kept in these type of conditions right now, and so this is about giving those hens enough space,” Harris said, “and it’s about protecting the Massachusetts consumers from unsafe, substandard and inhumane eggs and meat products.”

But the 3,000 hens Harris mentioned are all at one farm.

Diemand Farm in the western Massachusetts town of Wendell is the only farm in the state that houses egg-laying chickens in small, wire cages. (And there are no farms here that use the other practices that would be banned by Question 3.)

Diemand Farm's owners have been inundated with calls about Question 3, and declined an interview for this story.

Because no other farms in the state use the practices that would be banned by Question 3, Brad Mitchell says he and the 6,000 members of his Massachusetts Farm Bureau are voting against the initiative.

“We’ve long abandoned these practices in Massachusetts -- again with the exception of one farm," Mitchell said. "And I don’t see [the practices] ever coming back, so we’re a little perplexed as to why we’re the target of this.”

Mitchell says some of his members feel like pawns in a national campaign to drive policy in other states.

They’re also concerned this ballot measure is undermining consumer confidence in local farms that have worked hard to cultivate relationships with their customers.

And because Question 3's passing would also eliminate the sale of products from confined animals, Mitchell questions Massachusetts' ability to monitor practices at out-of-state farms that raise pigs for pork and hens for eggs.

“On one hand we look at this and say, ‘Well, I guess it’s a level playing field and maybe this will level it even more.' But we’ve got some serious questions about how the attorney general is going to enforce this,” Mitchell told me. “I don’t think they have a lot of folks who know a lot about agriculture — and I know they don’t have a lot of folks who know about agriculture stationed in Iowa.”

Farms in Massachusetts are a different breed than the factory farms in other states.

“They get to graze, they get certified organic grain, they have a livestock guardian dog that lives with them 24-7 to keep away foxes, fisher cats and coyotes,” Lowy said as we walked toward the mobile hen houses his egg-layers call home.

Since 2003 Pete and his wife Jen have been caring for pasture-raised chickens that get to eat and dust bath outside in the open air. But Lowy says cage-free practices require more labor, money and land than conventional methods.

Even with their long-standing dedication to humane animal farming, Lowy says the ballot measure raises a lot of questions for him and his wife.

“We believe [in] raising our animals this way because we just think it makes sense in a million different ways, but I think the ballot question is a complicated issue and everyone has to understand the ramifications of a bill like this,” he said. Lowy is concerned about unclear language, further regulation of farmers and the impact Question 3's passing would have on consumers.

'I Don't Want My Affordable Choice Taken Away'

Indeed, many opponents say the question's biggest impact would be felt by consumers.

While the vast majority of eggs produced in Massachusetts already conform to Yes on 3's space requirements, most eggs in grocery stores, which commonly come from out-of-state producers, do not.

“I don’t want my affordable choice being taken away,” Diane Sullivan said as she surveyed shelves packed with all kinds of pricey, cage-free, organic and pasture-raised eggs at a local grocery store where we met.

Sullivan is an anti-poverty advocate from Medford who remembers feeding her family with “breakfast for dinner” when she was struggling.

“Eggs are an essential part of the everyday diet of folks," she said. "So I think of my children, I think of other families who go through that struggle every day, and to essentially remove probably the most affordable and accessible form of protein from the diets of those who are already not perhaps eating enough nutritious food to me doesn’t seem very humane."

Sullivan has been working to create a campaign against Yes on 3. It’s this election’s only ballot measure without formal opposition. Sullivan was also a plaintiff in a lawsuit to prevent Question 3 from appearing on the ballot, but the Supreme Judicial Court ruled against the suit.

Sullivan expects approval of Question 3 would cause egg prices here to skyrocket.

“People have the choice already, yet 90 percent of us buy conventional eggs because, I’m sure, for the most part that’s what we can afford,” she said.

The Yes on 3 campaign claims the shift would cost a penny per egg.

Not Just About Eggs

But this ballot question isn’t just about chickens and eggs. It’s also about pork.

Confining pregnant pigs in what are known as "gestation crates" — which a lot of farmers believe increases the chances their animals will give birth — is standard practice in other parts of the country.

National Pork Producers Council President John Weber has a large pig operation in Iowa and represents 68,000 U.S. producers. He said approval of Question 3 would limit the supply of pork in Massachusetts.

“All this ballot initiative is going to do is restrict that one method, which happens to be the majority of the pork produced in the country," Weber said, "and believe me it will have an economic impact on food prices."

And Harris, of the state Humane Society, notes hundreds of companies, including McDonald's and Dunkin' Donuts, have already pledged to transition to using only cage-free eggs over the next decade.

“This is part of a global shift in the direction towards cage-free,” she told me, “and the Massachusetts initiative will codify a lot of changes that are already underway. With so many food companies pledging to go cage-free it’s the way of the future.”

If voters decide Question 3 should become a law, the animal containment practices it seeks to end would be phased out by 2022. Massachusetts would join nearly a dozen other states that have passed similar laws, including Arizona, Maine, Florida and Michigan.

Radio Boston, along with UMass Boston and The Boston Globe, host a debate Tuesday, at 3 p.m., on the farm animal confinement ballot question.