It may be doing the Barrington Stage Company a disservice to say that year in and year out it produces the best musicals in Massachusetts, as can be witnessed by its sparkling production of “On the Town” (through July 13 on the Mainstage). And then there’s William Finn’s ongoing “Mr. Finn’s Cabaret” throughout the summer.

It’s a disservice because Barrington Stage since its inception in 1995 has also produced first-rate drama, from its opening play, “The Diary of Anne Frank” to its current provocative world premiere, “Muckrackers,” by Zayd Dohrn at the second stage, the St. Germain Stage (through July 6.) St. Germain, a gifted playwright has, like Finn, found an artistic home in Pittsfield.

All this is due to the leadership of Julianne Boyd, who founded the company in 1995 and has been going great guns ever since. Musically, her “Cabaret” in 1997 was revolutionary. “Lady Day at Emerson’s Bar and Grill,” “South Pacific,” “Follies,” “West Side Story,” “Carousel” were all exeamplary. And in between, that artistic home she gave Finn resulted in a little something called ”The 25th Annual Putnam County Spelling Bee.”

She hasn’t been directing the company’s musicals in recent years, but they’re no less an event thanks to John “Urinetown” Rando with a rocking “Guys and Dolls” two years ago and now “On the Town.” Bernsteinians in his native state should count ourselves lucky that we’ve had two such terrific (and very different) “On the Town” productions as the Lyric Stage Company’s and now Barrington’s.

This one is a much bigger-budgeted extravaganza, drawing on six triple-threat singer-dancer-actors to tell the story of three sailors on shore leave in the 1940s connecting with three unlikely women and then going on the town with them. The three men are in a different league altogether from the Lyric’s trio, not only dancing up the proverbial storm but displaying the kind of athleticism you normally only find on ESPN. And Tony Yazbeck’s performances of “Lonely Town” and “Lucky To Be Me” bring down the house, as does his dream ballet with the lithesome Deanna Doyle as Ivy. 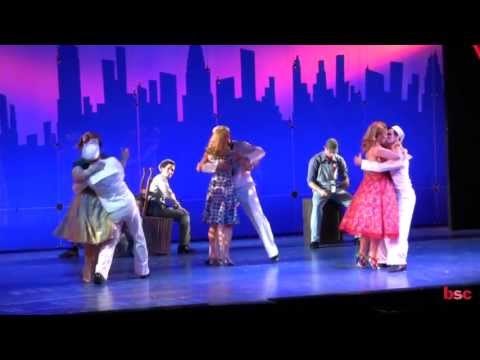 The women are equally striking – this is the most overtly sexual production I’ve seen – though the Lyric’s Aimee Doherty gets the highest marks as Clair, the anthropologist who doesn’t hold back on her investigation of the hunky sailor she renames “Specimen.”

The band (led by Darren R. Cohen) and the choreography (Joshua Bergasse) both underscore the exuberance that Leonard Bernstein, Adolph Green and Betty Comden all brought to Broadway in the 1940s, announcing a jazzier mindset in content as well as tone. Beowulf Boritt’s bare set, (a drawing of the skyline with mirrored panels), might need beefing up if the show makes it to Broadway.

For all that, I’m not sure I liked this any more than the Lyric’s, which used the intimacy of the space so imaginatively. It had the benefit of going first and being seen in conjunction with the similar-themed “In the Heights” at SpeakEasy but I really had the sense of Bernstein, Comden, and Green going out on the town to create a new kind of musical in that one.

But let’s not get hung up in comparisons. Barrington Stage’s opening musical is one of the highlights of the summer season and Rando’s vigorous salute to the greatest generation — of composers as well as soldiers — is a full-throttled delight.

“On the Town” is not an exercise in nostalgia or in innocence. The three writers were exploring the ‘40s with sophistication and even daring, though it’s less obvious today. Bernstein, a committed activist, would have appreciated how Zayd Dohrn does the same thing in “Muckrakers,” a sly exploration of the debate over governmental, and other, secrets on the St. Germain Stage through July 6.

Mira and Stephen open the play stumbling into her small New York apartment, dressed to the nines, but seemingly in the process of being less togged. He can’t wait to get into bed with her; she can. She wants to know all about him. (Director Giovanna Sardelli and the designers get all the details down just right.)

Stephen, it turns out, is a British Wiki-like leaker who got an army man to tell all about some less than savory goings-on in Iraq. She, on the other hand, is a radical leftist version of Edward Snowden who believes in total transparaency.

If this doesn’t sound like the stuff of riveting drama, it’s admirable how Dohrn makes it so. The sexual element doesn’t hurt, particularly when you have a couple, Kate Rogal and Kahan James, who are so easy on the eyes. Their acting’s first-rate, too, so they’re able to keep the audience’s attention throughout the 80 minutes or so even when one starts to wonder if Dohrn’s eyes have left the prize. 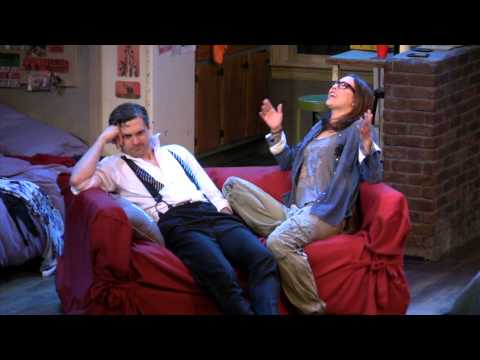 But he knows what he’s doing. The dialogue is always good, if never great, and when they do get down to business, both sexual and political, fireworks and revelations come fast and furious, even though the production, if not Dohrn, telegraphs the ending at one point. He also makes it a little too evident that he’s not a believer in total transparency as Stephen easily out-debates Mira.

Still, it’s a strong ending to a smart play. And paired with “On the Town,” a great beginning to Barrington Stage’s season.

Elsewhere in the Berkshires:

This program aired on July 2, 2013. The audio for this program is not available.