BOSTON – Is there a cosmic reason for so many Chekhov plays around here recently? Or are we just glad to see him under any circumstances?

I tend to think the latter, particularly when the adaptation of “The Seagull” is just what the doctor ordered — Anton was a physician as well as one of the fathers of modern theater. The late Paul Schmidt’s translations are the best in a very big business, and the Huntington Theatre Company knows exactly what to do with his superb “Seagull” (through April 6).

Too many Chekhov productions are overly respectful of the literariness of Chekov, the older women a little too diva-ish, the men a little tortured and far too stiff, the interplay overly formal. A little bit like Woody Allen’s “A Midsummer Night’s Sex Comedy” without the comedy (never mind the sex).

Schmidt’s translations are loaded with comedy, and there’s a noticeable lack of stiffness. Maria Aitken’s direction captures the basic tenor of the translation and adds some sparkle of her own. Having such a talented cast doesn’t hurt. (“The Seagull” was supposed to be directed by former Huntington honcho Nicholas Martin, who fell ill, but he’ll be back next season with Christopher Durang’s Chekhov takeoff, “Vanya and Sonia and Masha and Spike,” which he directed in New York. Here’s the Huntington season.)

So what makes this Chekhov different from others? Almost everyone in the play is in love with someone other than the person who loves them, a fact that weighs each of them down. But how weighed down should the audience be? Not as much as they usually are since Chekhov often called his plays comedies.

Here are the cast and crew talking about "the human comedy." 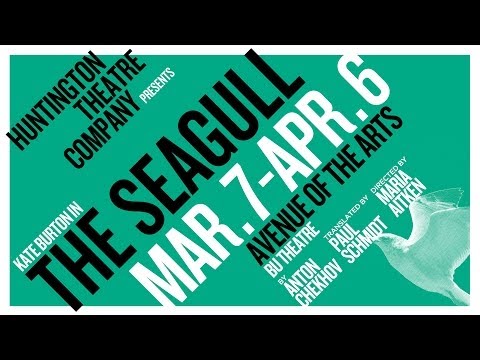 That doesn’t mean his plays are early 20th century versions of “Girls”; they’re often tragic and always elegiac. When Nancy Carroll’s Paulina Andreyevna rips up her flowers because she’s stuck with her dopey husband instead of the sophisticated doctor, it’s funny because it’s so human. Ditto Kate Burton’s Arkadina with her never-ending attempts to be the prettiest cougar in Russia.

For all their manipulations, there’s the Chekhovian sense that it’s all for naught. Not only are we here for just a speck of eternity, but all our pleasures are fleeting and our lives absurd. Trigorin, Arkadina’s lover, knows he will desert her for younger blood and then destroy Nina, but Ted Koch’s Keitel-like performance makes him as pitiable as the two women he’ll inevitably leave.

No one, though, is more tragic than Morgan Ritchie, Burton’s son in real life, as Konstantin, the artist whose vision exceeds his grasp and whose love is the most genuine emotion on stage. I was at first put off by the lack of charisma in his performance. Actors often go to town on the misunderstood artist. Yet it’s a performance that has stayed with me; his understatement reflects his sadness in a way that's impossible to dismiss.

It’s really a terrific ensemble, all around. Carroll, Thomas Derrah and Nael Nacer do Boston’s acting community proud. They all luxuriate in Ralph Funicello’s lakeside set, which seems equally comforting and doom-laden.

This certainly doesn’t mean that the Huntington’s way — the Schmidt-Aitken-Martin way — is the only means to get at Chekhov. Just recently we’ve seen the wildly creative Baryshnikov Productions “Man In A Case” at ArtsEmerson and “The Cherry Orchard” by Actors’ Shakespeare Project at the Dane Estate at Pine Manor College (I didn’t join in the lovefest for the latter.) And the Harbor Stage Company brought its more visceral, stripped-down “Seagull” to the Modern Theatre this season as well. Add translations of Chekhov by David Mamet, Tom Stoppard and Annie Baker to the canon and it’s obvious there’s more than one way to skin Chekhov.

Still, Schmidt offers such a soulful, modern way into the Russian master, and the Huntington walks that path seamlessly.