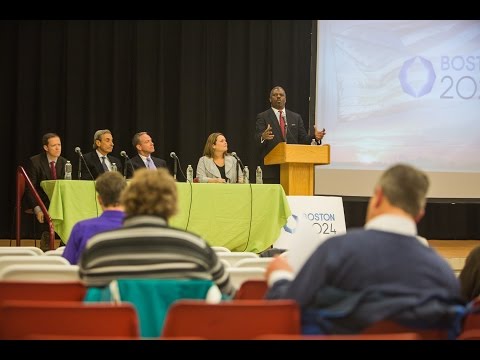 Backers of the effort to bring the 2024 Summer Olympics to Boston are trying to build public support by reaching out to residents of each neighborhood in the city.

But in Roxbury Monday night, they found themselves largely on the defensive.

Ask him where he's from and Michael Bonds responds with pride: Roxbury. It's part of the city he says can get left out of the conversation. He wants to know how that won't be the case if the Olympics come to Boston.

"I'd like to know the direct impact that we will have, that these Games will have on our city," Bonds said. "I love Boston, but we're concerned about that because it seems like we're always left out."

Bonds spoke up at a Citizen Advisory Group meeting of Boston 2024, the private sector group formed to advocate for Boston to host the Games. John Fish, who chairs the group, told Bonds the city would reap many benefits, from more housing to urban development to new transportation infrastructure.

"Let me talk about jobs specifically," Fish said. "When you talk about hosting an Olympic and Paralympic Games, there will be over 100,000 to 125,000 jobs, between volunteers and newly created jobs. This can be, we feel confident, benefit the entire community."

"So we don't know," Davey said. "As I said, I think what we're working on now is to deliver that kind of economic development ... if we win the Games."

A recent WBUR poll finds that 48 percent of Bostonians oppose the Olympics being held in the city, compared to 43 percent who support the idea.

"Are you really interested in giving the communities quote-unquote something that they can use and build upon and have something that's long-lasting, that's beneficial to us?" Jackson asked. "Or are you just here to say a whole bunch of stuff that sounds nice so that we can help your cause along?"

"Please do that," Jackson said.

"We can make no promises," Davey said.

Regardless of whether the city is picked as the site of the Olympics 10 years from now, the very prospect is raising some deeper questions about just what is meant by economic development.

Correction: An earlier version of this report mixed up poll results for Boston and Boston-area residents. Forty-eight percent of Bostonians oppose the Games, according to our latest poll, not 46 percent. We regret the error.

This article was originally published on February 24, 2015.