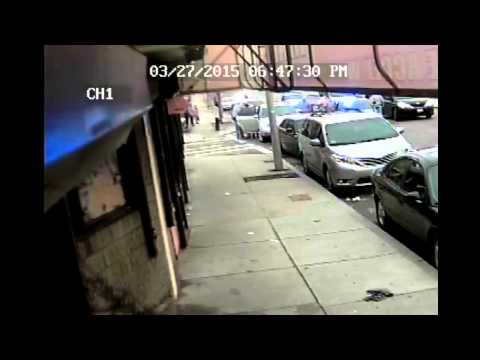 The release comes two weeks after the March 27 shooting in which Officer John Moynihan was shot in the face during a motor vehicle stop in Roxbury and the suspect, Angelo West, was shot and killed.

The video shows Officer Moynihan, along with several other officers, approaching a vehicle that had been pulled over. Moynihan reaches for the driver's door and is shot as the driver exits the car. Moynihan then falls to the ground and the driver runs out of the camera's frame.

In a press conference Friday afternoon, Suffolk Country District Attorney Dan Conley said the investigation into the shooting is still underway, but he wanted to make the video public to provide transparency.

"This policy of transparency is ​almost unparalleled everywhere else in the country, but even best practices can get better, and that's what brings us here today," Conley said. "In the past we have waited until the investigation was complete before releasing the file and releasing video evidence that was relevant to our decision ... I've been urged to release certain evidence earlier in the investigation when it can help illuminate the facts and when doing so would not compromise the integrity of the investigation. And that's consistent with a nationwide trend towards more openness in these very sensitive investigations."

Conley said the move to release video early in the investigation came as a result of meetings earlier this year with various civic and religious leaders.

That transparency is something several community leaders praised in the days immediately following the Roxbury shooting — though some say there needs to be more.

Boston police met with community leaders and local clergy less than 24 hours after the shooting to show them the video and answer questions. Michael Curry, the president of the Boston NAACP, said at that time the move set a precedent for more of that type of outreach and transparency in future cases.

"This now puts the ball in the police department's hands, and I think the commissioner embraced it, that going forward [they will continue to share information] whether there’s video or not because there won’t always be video," he said in the days after the shooting.

Others who attended that meeting where the surveillance video was first shown said they want the community to be able to see video footage whenever it is available in other cases.

"My concern is that we not only see videos when it clearly shows what [police] describe — which is an individual stepping out of a vehicle and shooting the officer point blank in the face and then running off shooting at other officers — but [also] when the video does not tend to exculpate or vindicate the officers," said Rahsaan Hall, the deputy director for The Lawyers’ Committee for Civil Rights, a nonprofit legal organization that handles discrimination cases and issues related to police misconduct.

On Friday, Boston Police Commissioner William Evans said he would use the same approach regarding video in other cases.

"In these types of investigations, as we're seeing across the country, I think it's so important to be as transparent as possible," Evans said. "I know there's been some feedback from the community that releasing this video could have some negative effects, but you know, we did a lot of outreach to the community — some of the religious leaders, political leaders and leaders of the civil rights groups — and I think we all agree that going forward, not only with this video, but heaven forbid any other shootings, that we have to follow the same process."

Officials said they were unable to meet with West's family to show them the video before releasing it publicly.

"Despite our very best efforts, we haven't been able to schedule a meeting with Mr. West's wife," Conley said. "While we understand the loss that she suffered, we just couldn't defer the release of this video indefinitely against the broader public interest."

Evans said they respected the family's wishes to wait to release the video until after West was buried on Tuesday.

Officer Moynihan's condition has been improving since he had surgery to remove a bullet lodged below his ear days after the shooting. Evans said Friday that Moynihan is "remarkably doing well."

This article was originally published on April 10, 2015.