In Saugus, traffic often backs up on Main Street as drivers try to get to Route 1. But there are side streets to avoid some of that.

Waze — an app that helps drivers find shortcuts -- led me to one of them: Juniper Drive. It's a wide suburban street lined with homes with well-manicured lawns.

On a workday morning, you can hear birds chirping. But there's also another sound -- cars zooming through to avoid Main Street's traffic.

This shortcut speeds things up for drivers, but for residents such as Brian Nordike, the increased traffic is frustrating.

"It gets pretty busy," Nordike says. "This is a main area that you can avoid a lot of the streets. So they use this all the time.”

Some here in Saugus say savvy drivers have always used the road as a cut-through, but technology like Waze has probably made the traffic worse.

Down the street from Nordike is Janis Mini. She's lived in the neighborhood for almost 40 years. Each morning, she has a cup of coffee and sits by her picture window, watching the traffic go by.

"I am at this window every morning early, and you can’t help it but to see them coming down," she says. "It’s aggravating. I’m telling you, I can’t take all this traffic.”

She’s even suggested to her husband Mike that they move away from the neighborhood. And she's not alone. According to a WBUR poll, 14 percent of Boston-area residents said in the past few months, they've considered leaving the area because of traffic.

Janis and Mike Mini say they've tried a number of tactics to get cars to slow down — including throwing cups at them.

"How many cups have we thrown at the cars?" Janis Mini says, turning to Mike, who laughs and says, "None. Don’t incriminate me!"

"Whatever we have in our hands ... we throw them," Janis Mini says.

The couple says they want Saugus to reduce the 30-mile-an-hour speed limit on Juniper Drive. They hope to put together a petition in the summer to get the town to take up the issue.

“Sometimes I think we’re losing the neighborhood effect of this street because of the speed limit and the amount of traffic that comes down," Mike Mini says. "Years ago the kids used to be able to play street hockey."

He says they can't really do that on Juniper Drive these days.

How The City Of Boston Is Using Waze

Waze often diverts drivers through residential streets to avoid traffic. But it's also helping reduce traffic in Boston through a partnership with the city. Boston shares information about road closures so Waze can navigate around them, and in return the city gets data about reported traffic jams.

To see it in action, go to South Boston to Seaport Boulevard and Atlantic Avenue.

With ramps to I-93 and traffic flowing between Boston's waterfront and downtown, this area can be a major gridlock zone. But on a recent morning, traffic flowed easily along the roadways. Chris Osgood, Boston's chief of streets, says the city is using Waze data to assess traffic flow.

“The engineers took a look at this particular intersection and wanted to see if there was a better way we could adjust the phasing of the traffic signals themselves to get better use of both Atlantic Ave. and Seaport Boulevard to ensure there’s less congestion," he says at the intersection.

Waze enables the city to see how the re-timed traffic signals help speed traffic along. Osgood says there's been an 18 percent decrease in reported traffic jams since the lights were changed late last summer.

“Before what you would have seen were much longer queue lines [and] much longer backup along Seaport Boulevard of cars headed back into the South Boston waterfront," he says. "What we’ve been able to do since then is be able to adjust the signal phasing so that the queue length is shorter, the traffic jams are fewer, and the emissions are less.”

Boston routinely re-times traffic signals. It just did that to lights at 18 intersections in Dorchester. But Osgood says these are just incremental changes to improve traffic. What's needed, he says, is to encourage more people to use alternate modes of transportation.

“Whether that means looking at dedicated lanes for buses so that the reliability of bus travel is better, more protected bikes lanes for cyclists to encourage more people to be able to ride to work ... really improving the pedestrian experience … by doing things like improving pedestrian signalization," Osgood says. "All of those things are things that we’re looking at to really create that multi-modal city.”

“Being able to collect information that residents want to provide us through apps like Waze ... give[s] us good information around perhaps some of the bigger re-engineering opportunities this city has," Osgood says. "It’s an opportunity in many ways to create a better bridge between residents and government, and technology is providing that infrastructure to allow that.”

It's Man vs. Machine. Our digital team decided to have a little fun with Waze. Check out the video below for a race from Lexington to our WBUR studios: 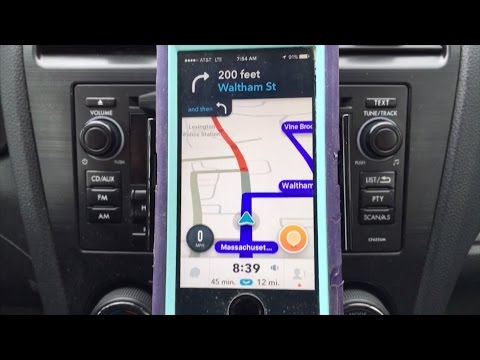 Tech companies are already creating bridges of their own — directly to customers who want alternative transportation options, now.

There are ride-hailing companies like Uber and Lyft that connect people to private cars through apps. Then there’s Bridj, a Boston-based company that operates a private bus service. CEO Matthew George says Bridj uses technology and big data to fill in gaps in public transportation.

“We look at a couple billion data points a day to be able to understand how a city like Boston moves," George says during a recent Bridj ride. "Once we understand how the city moves we then create on-demand flexible bus routes that follow the patterns of the city. So instead of having to have the user catch the bus, the bus sort of catches the user."

"We look at a couple billion data points a day to be able to understand how a city like Boston moves. ... So instead of having to have the user catch the bus, the bus sort of catches the user."

The Bridj app enables passengers to indicate where they are and where they want to go. Then they are directed to a pickup location, where they join other riders.

Transportation services like Bridj tend to cost more than public transportation. For example, the average Bridj ride costs $4, according to George. That's compared to the $2.10 it costs to ride an MBTA bus.

Tech companies are also looking to partner with public transit agencies. For example, the MBTA is considering working with ride-hailing companies to provide late-night service as well as paratransit service for people with disabilities. And Bridj has a pilot program in Kansas City, Missouri, where the transit agency operates the on-demand bus service.

CEO George says he sees Bridj as the next iteration of the city bus, where instead of fixed routes and stops there is a flexible pop-up service — all based on big data that could have a powerful effect on traffic.

“A Bridj vehicle is moving eight to 10 passengers per trip in the vehicle footprint of a large SUV," George says. "There’s a huge portion of our users who are transitioning from single occupancy vehicles into Bridj, so we’re getting more people into mass transportation rather than more people into single or double occupancy cars.”

"We do imagine a world where there’s no more traffic in Boston in five years," Kalanick said, receiving laughter from the crowd. "That’s the crazy world that we dare to imagine."

Uber imagines a world where anyone can become an Uber driver. You could just turn on the app and pick someone up on your way to work — and make a little money on the side. (The service, called UberCommute, started in China last year and hasn't yet launched in the U.S.) The idea is that this will take carpooling to the next level and ease congestion by taking more cars off the road.

But that still leaves what is perhaps the biggest traffic roadblock in place — drivers. And now, technology is trying to replace them too — with cars that can drive themselves.

This article was originally published on April 28, 2016.