Veronique Dorsey grew up immersed in the second line brass band tradition of New Orleans. “Second lines used to always pass in front of my house,” Dorsey says, referring to the boisterous, feather-decked parades that ripple through the city on a near-weekly basis. But it never crossed her mind that she might someday contribute to the cacophony herself.

Dorsey plays trumpet in the New Orleans brass band The Original Pinettes, who you can catch at this year’s Honk! Festival of Activist Street Bands in Somerville and Cambridge from Oct. 7 to 9. “I was always interested in music because my mom's a musician and my grandfather was a singer. So I was always around music,” Dorsey says. “I just never thought girls could be in brass bands because I never saw it.” 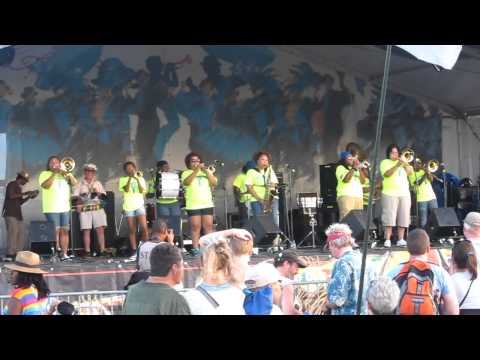 The Original Pinettes are billed as the only all-female second line brass band in a city that overflows with marching bands. The group was founded in 1991 by Jeffery Herbert, then the band director at the all-girls St. Mary’s Academy and a member of the Original Pin Stripe Brass Band. In the decades since, The Original Pinettes have morphed into a multigenerational institution all their own. Though the group has weathered many lineup changes, it has never abandoned its mission to elevate women in New Orleans’ vibrant brass band culture.

The roots of the second line tradition can be found in the blending of European military brass band music with West African dance rhythms brought to the continent by slaves. After the Civil War, benevolent societies sprung up in New Orleans to help fund funeral services for recently emancipated African-Americans, who were often denied insurance coverage. These Social Aid & Pleasure Societies would sponsor elaborate parades in honor of the dead, featuring dapper participants in bright regalia. The “second line” refers to the trail of funeral-goers who joined up in the band’s wake. These days, the music pulses with hip-hop beats and jazz inflections, and second lines are a common sight on most Sundays in New Orleans, funeral or no.

Dorsey says the second lines became especially crucial after Hurricane Katrina displaced so many of the city’s residents. “After Katrina, when people were all over the place, people would come down every Sunday for the second lines, because that was the meeting place,” she says. “You were going to see somebody that moved to Houston, moved to Atlanta — they just came down for the second line.”

In fact, The Original Pinettes struggled to stay together after Katrina scattered them far and wide. Dorsey credits the band’s current leader, Christie Jourdain, with remolding the group in the aftermath of the catastrophe. Dorsey, who works as a school teacher and started playing trumpet in seventh grade, was recruited in 2011 after she performed in a second line funeral procession for a departed friend. 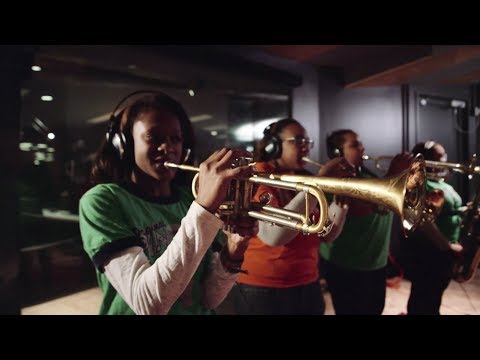 “At the time, I wasn't really interested in brass bands. I liked going to second lines, but I didn't think it wasn't something I could do. I guess I just didn't have confidence in myself,” Dorsey recalls. “So they asked me to come to a practice and I was like, ‘Oh, I don't know, I don't know, I'm not sure.’ So then they saw me again at another performance and Christie was like, ‘Look, practice is tomorrow, you got to be there if you want to do this.’ And I'm like, ‘Why not?’ So I went to the practice on Tuesday, and on Thursday they put me on a gig.”

Dorsey believes that the lack of female representation in second line bands has more to do with implicit bias than outright discrimination. “It's not even explicitly stated, it's just — the boys have been doing it. So it's just like a boys' thing,” she says. “It's never like the men say, ‘Oh we don't want any girls to play with us.’ Now some of them will even call us sometimes to play. But … many girls don't play instruments, especially brass instruments. So they don't usually have girls in the band.”

Even so, The Original Pinettes still feel like they have to prove themselves every time they perform. "One, people expect us to sound different because we're girls,” Dorsey says. “But, two, I think there are people like, ‘They've been running for 25 years, when is it going to end?’ They expect us to end at some point, so we always have to show we're here to stay."

In fact, Dorsey thinks the band is playing at a higher level than it ever has before. The current lineup is a skilled and motivated group of musicians, despite some holding multiple jobs and raising children.

"It's definitely empowering to young females that look up to us, so that they know that they could do this, too,” Dorsey says. “[But] I think it's important for us to keep it going not only to empower other women, but to empower ourselves."