A Green Line trolley rattles along a dark tunnel toward Boylston Street station. Riders, including one man in a puffy coat and winter hat, wait on the station platform.

In a flurry of light and noise the train emerges around a tight curve, and in a move familiar to Boylston travelers, the man lifts his hands and covers his ears. 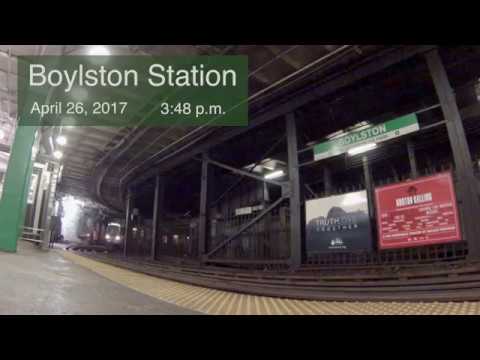 Ours isn't the first inquiry into the noise issue. But the T is trying something new this year, and that may help things — at least a little.

One of the people who contacted us was Eileen Engley.

"It's obviously quite loud," says Engley, standing on the inbound platform at Boylston. "You can't really ignore it. I've actually gotten to the point where, as I walk up the stairs, if I see a train coming I know to put my fingers on my ears, because I know it's going to get quite loud."

She says she has no idea what's making the squeal. "You'd think that it would be something that would be easy to remedy, but it's been going on for many, many years, so I'm assuming it's not," Engley says.

Many years indeed. Along with Park Street just up the track, Boylston opened in 1897. They were the first subway stations built in North America.

"It is curiosity piquing," Engley says, "that we have all this amazing technology that we walk around with, and yet there's still screeching at Boylston Street."

It's true we've seen a lot of new technology since 1897, but those tracks are pretty much where they've always been.

Have a look at this map, below. The inbound trains travel east along Boylston Street and then turn north onto Tremont Street. That's close to a 90-degree turn.

"The Boylston curve, I understand, is one of the sharpest turns in North America," says Jeff Zapfe, president of Acentech, a Cambridge company that specializes in figuring out noise issues for companies.

The sharpness of the turn has a lot to do with the squealing, he explains. The tighter a turn's radius, the greater the potential for squealing.

"Think of the [train] wheel as a circular bell," says Zapfe. When you get to a corner, the wheel wants to go straight but the rail forces it to turn. You get a stick-slipping motion and the wheel starts vibrating.

"It's almost like bowing a violin string," Zapfe says. "You're essentially bowing the bottom of the wheel and it's vibrating."

He adds: "A circular rail wheel is actually a pretty good radiator of sound. It's like a big loudspeaker. So once it gets vibrating, the sound radiates and you get this high-pitched squeal."

OK, so what can be done about it?

The easiest way to lessen the noise is to put lubrication like water or grease, or friction modifiers, like graphite, on the rail so that the wheel can slide, Zapfe explains. "But there are obvious reasons why you don't want your wheel to be sliding."

Another approach, he says, is to add rubber dampers or tuned metal frequency absorbers to train wheels to damp the sound.

So what is the MBTA doing? Kimberly Woollard, the deputy director of light rail vehicle maintenance and engineering, says the T has put greasers on the lines over the years. These pump a little grease on the wheels and rail as the trains go by. There are currently 13 greaser units on the Green Line, says Woollard, with an additional six being added throughout the line.

But they're also trying something new. Just last week T engineers finished putting flange stick lubricators on all the newer model Green Line trains. Imagine a giant Pez dispenser that holds a stick of graphite pressed against a train wheel.

Engineers will monitor the flange stick lubricators for the next few months to evaluate whether they should be put on the rest of the Green Line fleet.

While Woollard says it's too early to say how successful the new lubricators will be at reducing the squealing, she says other transit agencies have had success with them.

As for that tight turn at Boylston station, that's not going to change.

"You can't really change the radius of the curve because the tunnel is so old," Woollard says. "It's such a tight, tight corner. It was made for trains that don't exist anymore."

So next time you're at Boylston, perhaps it will be a little quieter than it was earlier this year. Please let us know if you think you've noticed an improvement.