Health care was a top issue for voters in the midterm elections, helping Democrats win back the U.S. House, and it remains a top issue today.

So it's perhaps surprising that even though Elizabeth Warren has built her presidential campaign on lots of detailed policy proposals, like universal child care, her health care plan can be summed up with just several words: "I'm with Bernie on Medicare for All," she declared at the first Democratic debate in Miami.

Instead of offering her own health care proposal, the Massachusetts senator has allied herself with Bernie Sanders, a fellow progressive and arguably her chief rival in her quest for the Democratic nomination.

Sanders' Medicare for All plan would raise taxes dramatically, do away with costly premiums and co-pays, and set up a government-run health care system that covers everyone.

"We will have Medicare for All when tens of millions of people are prepared to stand up and tell the insurance companies and the drug companies that their day is gone," Sanders said at the second Democratic debate in Detroit. "Health care is a human right, not something to make huge profits on."

Warren, who has spent years studying the struggles of the working class, says soaring medical bills are among the top reasons that cause Americans to go broke. She argues that Medicare for All would deal with that by ending private insurance.

"Look at the business model of an insurance company," she said in Miami. "It's to bring in as many dollars as they can in premiums, and to pay out as few dollars as possible for your health care."

In the last debate, Sanders and Warren formed a progressive tag team to defend the policy. It's unclear if Warren aims to unveil a plan of her own later on.

"By supporting Bernie Sanders' health care [plan], [Warren] gets the best of all worlds," said Mary Anne Marsh, a Boston-based Democratic political consultant, who says that by allying herself with Sanders on the Vermont senator's signature issue, Warren is making a shrewd political play. "[She gets] all the progressives and all of Sanders' supporters [if he] doesn't win the nomination."

Warren is now in the top tier of Democratic presidential candidates.

The latest evidence of that is a new Suffolk University/Boston Globe poll of likely New Hampshire Democratic primary voters. It found Joe Biden in first place with 21%, Sanders behind him with 17%, and Warren behind Sanders with 14%.

According to the survey, Warren is by far the most popular second choice of voters, suggesting her campaign has room to grow, and why she may be wise to back Sanders on health care. The poll also found that an overwhelming majority of likely New Hampshire Democratic voters — 85% — support Medicare for All.

But "a lot of people don't know what Medicare for All necessarily means," said Rich Barlow, a Boston-based journalist and writer.

In a piece for WBUR's Cognoscenti opinion page, he pointed out that according to surveys, a majority of Democratic voters support Medicare for All, but when they learn it would mean an end to private insurance, support drops. A new NPR/PBS NewsHour/Marist poll found much broader support for what it calls "Medicare for all who want it," which is more like Biden's "public option" plan.

"That would be cheaper ... and avoid the Titanic struggle in Congress, which we are guaranteed to get if we push a Medicare for All plan," Barlow said.

Sanders' plan is big and — depending on your point of view — either bold or unrealistic.

"I think it's very divisive — to take people's private health insurance away," said former Massachusetts U.S. Rep. Michael Capuano, a self-described progressive who supports the goal of universal coverage. But he believes that pushing for Medicare for All -- and advocating for the end of private insurance -- is a mistake.

"Pretty much every union member, every state and federal employee ... get their health insurance that way," he said. In fact, about two-thirds of the country has private insurance.

Capuano argues that if Democrats embrace Medicare for All, they will hand a powerful issue to President Trump to exploit in 2020. In the last Democratic debate, former Maryland Congressman John Delaney spoke to that concern when he said the plan goes too far.

"Why do we [have to] be the party of taking something away from people?" Delaney asked, as he tried to portray Warren and Sanders as too extreme. "That's what they're running on, telling half the country that your health insurance is illegal. It says it right in the bill."

Delaney is correct that Sanders' plan would make most private insurance plans "unlawful." That means more than 150 million Americans who have private plans would lose them. But Sanders and Warren says that the current system is unsustainable, and that rising co-pays and premiums are an increasing financial burden to millions of American families. They argue that under Medicare for All, everyone would be covered, while the overall cost would drop.

"I don't understand why anybody goes through all the trouble of running for president of the United States just to talk about what we can't do and shouldn't fight for," Warren replied to Delaney, in one of the most memorable smackdowns of the campaign so far. 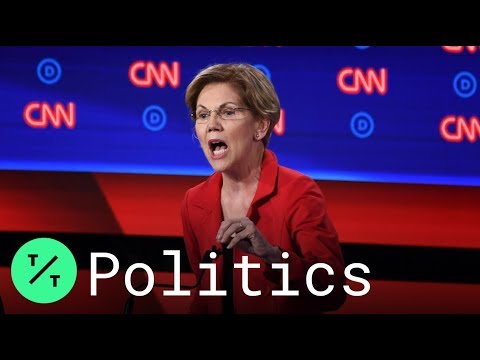 "When she went after Delaney, I tweeted, 'Hello 911, I want to report a murder,' " said political consultant Marsh, who argues that Warren's embrace of Medicare for All is a powerful way to energize the Democratic base.

And Marsh rejects the idea that it will give Trump and the Republicans an advantage. "Any Democrat is going to beat Donald Trump on health care, so that's a debate [Warren will] win every single day," she said.

"If you like your health care plan, you can keep it," Obama promised — many times. But the promise was impossible to keep to millions of Americans, and voters punished Democrats in the 2010 midterm elections.

Current polls suggest that when it comes to health care, Americans trust Democrats far more than Republicans. But the question for Warren and Sanders is: Will pushing for an enormously complex and costly government program like Medicare for All increase or decrease that trust?