It's been a good week for Sen. Elizabeth Warren of Massachusetts. Her presidential campaign announced strong fundraising numbers from the last three months, while recent polls place her in the top tier of a crowded Democratic field.

All this is happening as she continues to pump out policy proposal after policy proposal — the latest just Thursday, to decriminalize unauthorized border crossings as part of a sweeping reform of the country's immigration system.

Warren says her long list of policy plans — from a broad anti-corruption proposal, to establishing universal pre-K, to breaking up Facebook and other tech giants — is designed to bring "structural change" to a government and economy that she says no longer serve working families.

And to pay for all those plans, she'd impose a 2% wealth tax on fortunes greater than $50 million, with an added percentage point tax for net worth over $1 billion.

"It is not to say, 'You're bad, we don't like you, shame on you.' Not that at all," Warren told hundreds of supporters who filled the town hall in Peterborough, New Hampshire, earlier this week. "What we're saying is that when you make it big — I mean really, super, over-the-top big, the top one-tenth of 1% — then by golly, pitch in 2 cents so everyone else has a chance to make it!"

Agree with them or not, they're big policy proposals from a self-described policy wonk. And they appear to be fueling a mid-summer surge for Warren — which wasn't always a given.

Back in March, we did a story about Warren's policy-heavy campaign and noted that a number of polls found her struggling to connect with voters. That's when we heard from Richard Reeves, a senior fellow at the Brookings Institution — a guy who appreciates policy — but who told us this: "It's a painful truth to recognize that political brands matter more than policy platforms."

Reeves argued that Donald Trump's victory in 2016 offered profound evidence that political brands and slogans — like "drain the swamp" and "build the wall" — matter more than policy.

Nevertheless, Warren has continued her blitz of policy proposals, and voters are responding.

"You gotta go into the White House knowing what you want to do, and knowing what's gotta be done," said Charlie Harbeck, a Democrat from Swanzey, who attended Warren's event in Peterborough. "And I feel she's the one who can do it."

"I think the last election may have been a slogan-election and this one shouldn't be. It didn't work," she said. "I actually think that she will put the middle class back, and that's an important aspect. I grew up very poor and was influenced by people who could move up. I don't think young people can any more."

Polls suggest that Warren's campaign is on the rise, including one from The Economist/YouGov, which came out this week and has her in second place, just 5 points behind Joe Biden. Also this week, her campaign announced that it took in $19 million last quarter — the third-highest take among Democrats and about $1 million more than her fellow progressive, Bernie Sanders.

"She's in excellent position," said Peter Ubertaccio, a political scientist and dean at Stonehill College, who says rather than challenging the conventional idea that brand matters more than policy, Warren has made policy a crucial part of her brand.

"Warren has repeated the mantra — we all know it: She was raised on the 'ragged edge of the middle class.' That's her brand," Ubertaccio said. "And her policies tie into that. So, she has very skillfully established a particular brand for herself, creating a narrative that it's all about the policy, when I think in reality the brand came first and the policies have followed."

Ubertaccio says other successful presidential candidates have done this — including Bill Clinton and Ronald Reagan. But, he cautions, there's a long way to go in this race.

But What About The Long Run?

And as Warren continues to stake out positions on the progressive wing of the Democratic Party, some question whether her policies will help her or hurt her in the long run.

For instance, during Democratic debates last month, Warren was part of a small group of candidates who said they support Sanders' Medicare for All plan, which would end private health insurance for tens of millions of Americans. 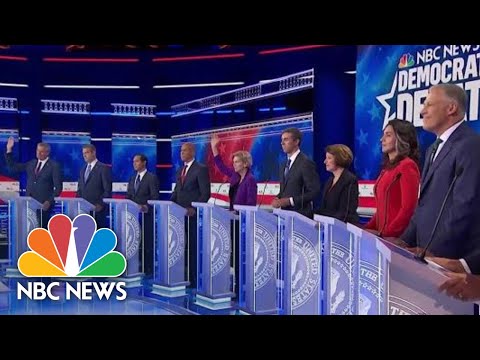 Warren's moderate rivals are betting many voters will reject that.

"I am just simply concerned about kicking half of America off of their health insurance, which is exactly what the bill says," said Minnesota Sen. Amy Klobuchar during the debate.

"Many of the proposals that the Democrats have discussed seem like a major effort to turn off the vast middle of the country," said Whit Ayres, a veteran Republican political consultant based in Atlanta.

Ayres gives Warren credit for her careful policy work. But he says many of her positions are too liberal to beat Trump in 2020 — even if they can help her outflank Sanders now.

Warren's advisers say she's running a campaign that she believes in. And in Peterborough this week, Warren said that means more of those detailed policy proposals.

"For me, it's about telling people exactly what I believe is broken and what we can do to fix it," she said. "And the No. 1 thing I hear when people come through to do selfies is, 'This gives me hope.' "

And for now, it seems to be working.