As they and others battle for the Democratic presidential nomination, former Vice President Joe Biden and Massachusetts U.S. Sen. Elizabeth Warren are revisiting an old fight that defines a major rift in their party.

The fight goes back to 2005. Biden was a Democrat on the Senate Judiciary Committee. Warren was a Harvard law professor and an expert on the middle class and bankruptcy.

Biden, along with most Republicans, favored the Bankruptcy Abuse Prevention and Consumer Protection Act, a bill to reform bankruptcy laws — essentially to make it more difficult to file for bankruptcy. Warren opposed the legislation because she saw bankruptcy as a crucial protection for working families hit by financial devastation. 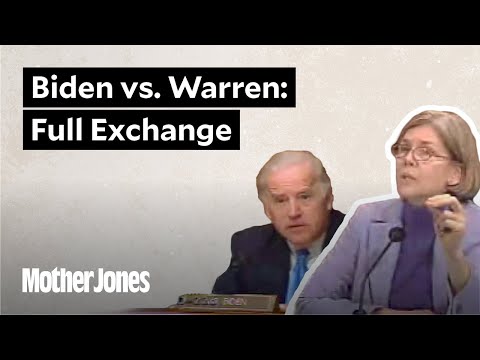 "Those families have to turn somewhere," Warren insisted in what became a heated disagreement with Biden. "And that means they turn as a last-ditch effort to the bankruptcy court."

As the argument went on, Warren talked about how credit card interest rates were hurting working families, a point which Biden said was unrelated to the merits of the bankruptcy bill.

"Your problem with the credit card companies is the usury rates," Biden argued. "It's not about the bankruptcy bill."

But Warren pushed back, saying that if lawmakers like Biden weren't prepared to tackle middle class America's debt crisis, including sky-high credit card interest rates, they shouldn't make it harder for people to file for bankruptcy protection.

"You can't take away the last shred of protection for a family," Warren said.

Warren's argument appeared to leave Biden without a comeback.

"I got it," said Biden with a chuckle, adding, "you're very good, professor."

There are three important points to note about that moment 14 years ago:

"It led her to believe that the system was really broken," said Matthew Yglesias, a political and financial policy writer for Vox, who says that Warren-Biden clash offers "a window" into a fundamental disagreement within the Democratic Party today.

On one side, Warren, a leading progressive, argues that the American political system is rigged against working families. On the other side is Biden, the centrist.

"He's talking about how Donald Trump is an aberration," Yglesias said of Biden. "He has a sort of 'restorationist' view that we should go back to a time when we had these big bipartisan bills, when he thinks America was working better. And Warren's view is that America was actually working terribly back then."

As he campaigns for the presidency, Biden argues that President Trump first and foremost is what ails America, and that what the country needs is to return to a time when Democrats like him worked with Republicans.

"I've worked across the aisle to reach consensus to help make government work," Biden said at a rally this past weekend in Philadelphia, where he officially kicked off his campaign. "I can do that again with your help," Biden told the cheering crowd.

By contrast, Warren advocates for fundamental structural changes to make the economy fairer. She says "markets without rules are theft," and has offered a series of policy proposals, including anti-corruption legislation and a tax on the super-wealthy. And in a stark difference with Biden, she argues that what ails America predates Trump. Warren makes it clear that her views were forged by her study of the middle class and bankruptcy more than a decade ago.

"I got in that fight, and I fought it for 10 years," Warren said during a CNN town hall last month. "And by the end of that fight, I fully understood that every single Republican stood there for the banks, and half of the Democrats did."

So it's not just Trump. Warren says it's also Republicans and Democrats, including Biden. On the day Biden announced he was running for president, Warren, campaigning in Iowa, attacked him for that bankruptcy vote 14 years ago.

"At a time when the biggest financial institutions in this country were trying to put the squeeze on millions of hardworking families, Joe Biden was on the side of the credit card companies," Warren said.

Biden has pledged not to speak ill of fellow Democrats. But his campaign says his support of the bankruptcy bill all those years ago helped make a Republican bill fairer to middle class families. But you can expect Warren to return to this argument as she battles Biden in the months ahead.

Biden knows that Warren is a tough adversary, as he made clear back in 2013, when, as vice president, he swore in the newly elected Warren to the Senate.

When the brief ceremony ended, he put his arm around her, and said, "You gave me hell," referring to their fight over the bankruptcy bill. Warren laughed and Biden smiled, but he probably didn't know that within just a few years she would challenge him again — this time for the soul of the Democratic Party.

Correction: An earlier version of this story mistakenly said Biden was the ranking member of the Senate Judiciary Committee during the 2005 hearing. He was ranking member earlier in his Senate tenure. We regret the error.

This article was originally published on May 21, 2019.