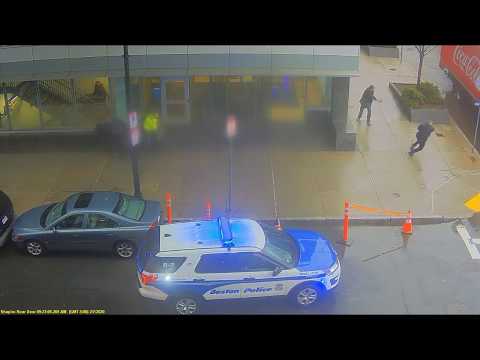 A valet at Brigham and Women’s Hospital was shot by Boston police officers as they fired at a suspect who brandished a weapon, Suffolk County District Attorney Rachael Rollins said Tuesday.

Rollins told reporters that the Feb. 7 incident began when the suspect, Juston Root, threatened a hospital security officer with what appeared to be a firearm in his waistband. After Boston police sent several patrol cars to the area and an officer spotted the apparent gun in his waistband, Root was ordered to stop; he instead aimed the weapon at an officer.

That’s when police began firing shots at Root, Rollins said. Root was injured but jumped into his vehicle, a Chevrolet Bolt, and fled. He was later shot and killed in Chestnut Hill.

In the midst of the gunfire, the valet attendant was shot, sustaining serious injuries to his eye, Rollins said.

A preliminary investigation has since revealed that the apparent gun Root brandished was actually a replica firearm, Rollins said.

"We can therefore determine that the valet was struck by a bullet discharged by a Boston police officer," she said.

Rollins said she has met with the victim, who is “alive, recovering” and “in good spirits.”

The DA’s office will determine whether officers acted appropriately in the incident, Rollins said.

Boston Police Commissioner William Gross said “it is not the intent” of any officer to find themselves in a police-involved shooting.

“We’re human too and quite frankly, you can see, that officer was definitely in fear of his life,” Gross said.

This article was originally published on February 25, 2020.