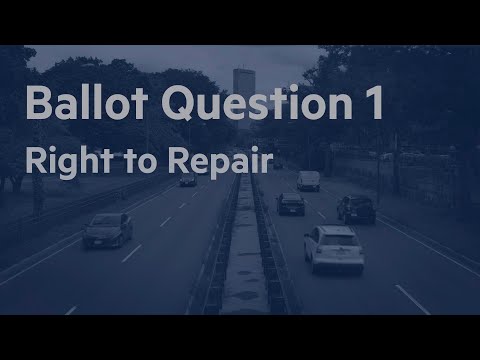 Question 1 on the Massachusetts ballot this fall may look familiar. It's a sequel to the "Right to Repair" measure that passed eight years ago.

Because of that law, you can take your car to any shop — not just a dealer's service center — and a mechanic can plug into your vehicle's computer system to figure out what's wrong. You can also buy a device to do this yourself.

The idea is that you have a right to the information needed to repair your car wherever you want and can't be forced to go to a dealership, hence the "Right to Repair" moniker.

To Get Ballot Question Info From Your Amazon Device, Just Say:

Now, with this new ballot question, many mechanics say they ought to have access to something more — something called telematics.

Details Of The Ballot Question

If you drive a late-model car, it's probably equipped with the automobile equivalent of a FitBit that monitors the vehicle's mechanical health and sends those readings wirelessly back to the manufacturer. The term telematics refers to this kind of real-time data about your car, and it can be valuable info.

There may be nothing wrong with your vehicle yet, but if telematics tell the manufacturer that a certain part is wearing down and will need to be fixed soon, the automaker can notify you in an email or even a message right on your dashboard. And there's a decent chance that alert will come with an offer to schedule maintenance — with just a few easy finger taps — at the dealer that sold you the car in the first place.

Some independent shops worry they'll lose business to dealer service centers because of the convenience factor.

What Your Vote Would Mean

A yes vote on Question 1 would create a shared database for the telematics that currently flow only to automakers. Drivers could then grant permission for any mechanic to keep tabs on their cars, which could help level the playing field. Your neighborhood shop could more easily anticipate a problem and prompt you to schedule service before something breaks — just like a dealership.

Automakers strongly oppose Question 1 and say they're not just looking out for dealerships but for drivers, too. They say a large, telematics database could be a magnet for hackers. And they point out that even if a maintenance alert tries to steer you to a dealer service center, you can always instead choose a different mechanic.

A no vote on Question 1 would make no change to the existing "Right to Repair" law.

Who’s Backing This, And Who’s Opposing It?

Advocates on both sides of the Question 1 debate are using extreme arguments to make their cases.

In an interview, Right to Repair Committee Director Tommy Hickey said if the ballot measure fails, "it could be the evisceration of the independent repair shop," and that consumers "are going to be forced to the dealerships."

He offered a possible scenario to support his claim:

Let's say you're driving along, and your starter's going to go out. So the manufacturer pings the car and says, 'Hey, go to a dealership right now. Your starter's about to go out.'

You say, 'Well, I have a trusted, independent repairer. I've been using him for 15 years. He's a local guy.' I go down to the independent repair shop, he plugs into the [on-board diagnostic] port, and no code comes up for the starter. So, he says, 'Nothing wrong with your car.'

While Hickey's hypothetical is plausible, a good mechanic might take the manufacturer's warning about an impending starter malfunction more seriously. Rather than simply check for a digital repair code, the mechanic could physically inspect the starter for signs of trouble and replace it before it fails.

In the sequence presented by Hickey, the driver isn't "forced to the dealership." Once the starter is broken, the driver could still hire an independent mechanic to fix it. And if the driver has "lost faith" in the formerly trustworthy "local guy," that is arguably because the local guy neglected to heed the manufacturer's warning.

Meanwhile, an ominous TV ad produced by the Coalition for Safe and Secure Data, the leading opponent of Question 1, suggests that passage of the ballot measure would help violent criminals hunt their targets.

"Domestic violence advocates say a sexual predator could use the data to stalk their victims," a female narrator claims in the ad.

Viewers who read the fine print will notice, however, that this concern is attributed to the California Coalition Against Sexual Assault. The group spoke out not against Question 1 in Massachusetts this year but against a bill in California in 2014. That bill, which did not pass, would have increased access to a wide range of vehicle data, including location information.

The measure on the ballot in Massachusetts this fall refers specifically to "mechanical data related to vehicle maintenance and repair."

In an interview, Coalition for Safe and Secure Data spokesman Conor Yunits contended that the "sexual predator" threat raised in his group's ad remains valid. He said the "mechanical data" language in Question 1 could be interpreted to include location information because driving in certain environments — the salty sea air of Cape Cod, for example — may corrode parts of a vehicle.

If a vehicle were to transmit location info to a shared database, that could create "personal safety risks," Yunits argued.

The Coalition for Safe and Secure Data is funded primarily by a trade association of auto manufacturers, according to the Massachusetts Office of Campaign and Political Finance.