Saying Boston needs a leader who "has lived the systemic inequities facing our residents," City Councilor Andrea Campbell is jumping into the race for mayor.

Representation in city leadership is shaping up as a central issue in the campaign. Campbell is a Black woman. Boston is a majority-minority city, and women make up slightly more than half the population, according to the Census Bureau. Yet all of the city's mayors have been white men. 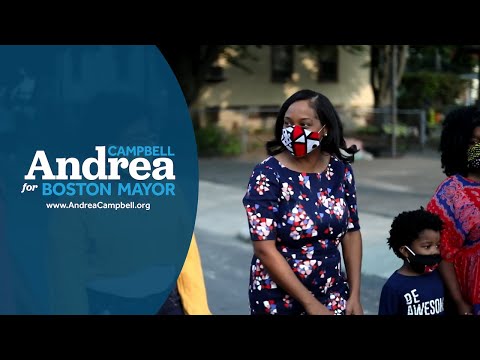 "I think we are in a profound moment of reckoning in our country and our city," Campbell said on WBUR's Morning Edition Thursday. "People are rising up and demanding change, and I think Boston needs leadership that not only understands the systemic inequities that are facing residents but also has lived them, so I am running for mayor to be that leader."

In a video announcing her candidacy, Campbell features a Black mother saying she wants her daughter to see "someone that she can relate to" in the mayor's office.

"I'm running for mayor because every neighborhood deserves real change and a real chance," Campbell says in the video. The district she represents on the City Council includes parts of Dorchester, Mattapan, Roslindale and Jamaica Plain.

Campbell kicked off her campaign Thursday in front of the Roxbury public housing complex where she lived for part of her childhood.

"By the grace of God," she told a small group of supporters, "and the opportunities this city afforded me, I stand before you today as a girl who grew up in public housing in Roxbury and the South End, with a family torn apart by incarceration and loss, who [was] elected the first Black woman to serve as the president of the Boston City Council and today launch a campaign to be the first Black mayor and first woman mayor of the city of Boston."

Campbell, 38, brings a compelling personal biography to the mayoral contest. A Boston native who lost her mother at 8 months old and spent time in foster care as a child, she attended Boston Public Schools and went on to Princeton and UCLA Law School. She delivered a TEDx Talk in 2018 about the death of her twin brother, Andre, who suffered from an autoimmune disease and died in state Department of Correction custody.

Campbell said on Morning Edition that her brother is the inspiration for her career in public service.

"I asked one question after he passed," she said, "which is: How do two twins born and raised in the city of Boston have such different life outcomes?"

Campbell said Walsh "cares deeply about the city, just like I do" but suggested her "different lived experience" makes her a stronger advocate for social justice.

"I think one of the things that is often lost is that Boston, unfortunately, is one of the most profoundly unequal cities in the country," she said. "And my concern is that on issue after issue — whether it's education, policing reform, lack of access to affordable, quality housing, good jobs, health care — that there's not enough action to dismantle systems that perpetuate these inequities."

Walsh has not commented on Campbell's candidacy.

Campbell acknowledged that she and fellow challenger Wu are similar in some ways: The two former City Council presidents are roughly the same age, boast Ivy League pedigrees, and either would be the first woman and first person of color to lead Boston.

But Campbell said there is at least one key difference between her and Wu, who grew up in Chicago.

"My entire life has been defined by the city of Boston," Campbell said. "It's where I was born and raised."

Wu said in an interview Thursday that she "wasn't lucky enough to be born in Boston" but contended that her own experiences, as a daughter of immigrants and a transplant to Boston, give her a valuable perspective.

"I know how important it is for a city and a community to be welcoming to everyone," she said.

Both Wu and Campbell shrugged off the notion that they could inadvertently aid Walsh's reelection by splitting voters who may be eager for new representation.

"I leave the punditry to you all and to folks who specialize in that," Wu said.

Campbell, at her launch event, offered a direct "no" when asked if she is concerned that she and Wu could pull more voters from each other than from Walsh.

This article was originally published on September 24, 2020.