Arlo Guthrie's rambling, spoken-word tune “Alice's Restaurant” is a Thanksgiving Day tradition on radio stations across the country. Over the course of about 18 minutes, the folk singer unfurls a true tale involving himself and his hippie friends in 1960s Western Massachusetts.

Now — more than 50 years after the iconic song hit the airwaves — its namesake has fallen on hard times. But Alice's friends have launched a crowdfunding campaign to help her stay in the only place she's ever really wanted to be: Provincetown on Cape Cod.

But first, it helps to find out how she got there.

How The Real Alice Became The Alice

When asked to introduce herself for our audio interview (which is standard procedure in radio journalism) Alice Brock didn't miss a beat. “Well, kids, this is Alice,” she said, “the famous living-legend, Earth Mother, Alice of 'Alice's Restaurant.'”

The nearly 80-year-old's wry wit continued as she recalled how Guthrie immortalized her Stockbridge diner and the deconsecrated church where she once lived. In his song, the musician describes returning to Alice's home/crash pad after throwing a truckload of her trash off a cliff because the dump was closed for the holiday.

“Drove back to the church, had a Thanksgiving dinner that couldn't be beat, went to sleep, and didn't get up until the next morning when we got a phone call from Officer Obie,” Guthrie recounted in his song. 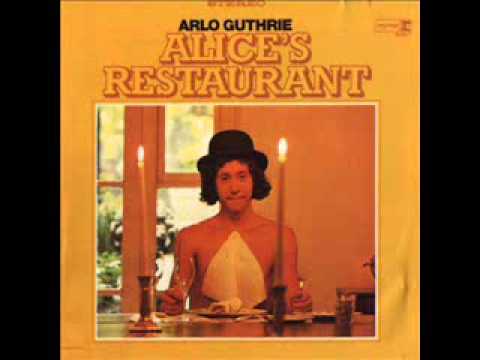 “It's really true,” Alice confirmed. When the real officer asked if she tossed the garbage illegally Alice replied, "No," then added, “but I know who did.”

Guthrie was arrested for littering and Alice fielded the call to bail them out. “Who had 50 bucks?” she asked this reporter with a shrug. But the gang pitched in to come up with the cash. “I paid it in quarters and foreign coins,” Alice said, “but I got them out.”

The folk singer's friends were delighted when they heard his musical embellishment. “He kind of perfected it sitting around this table,” Alice said in her kitchen. “We were all singing all kinds of songs. But that was great because it went on for so long, and it was a story, and we knew it. So it was like a song about us.”

Then The Movie Came Along

According to Alice, the idea for a feature film based on the song wasn't great at all. She felt it was the Hollywood version of a hippie's life. “So not true,” she said.

Alice said she didn't want to portray herself on the big screen. Instead, she took a part as an extra, along with her Berkshire friends. Actress Patricia Quinn was cast to play the fictionalized Alice. Even so, the real Alice said it was the movie — not the song — that made her a reluctant star.

She ended up writing a spin-off "Alice's Restaurant Cookbook" and filled it with her playful recipes, words and illustrations. Then Alice went on a tour to promote the book and the film. She said she resented the fame that followed. “It was insulting because I still had a life that continued after the movie, and everybody had me locked into that character,” she said. “And that was not my character at all.”

In the end, Alice said she took home about $12,000 after haggling with director Arthur Penn about her compensation for participating in the production.

Back To The Kitchen

After the movie and closing her diner, Alice opened a larger restaurant called Alice’s at Avaloch in 1976. It was located near Tanglewood, the Boston Symphony Orchestra's summer home in Lenox.

Alice hired her friends and created a kooky vibe there that included doing something called the Cabbage Samba. “We took out the outer leaves of the cabbage and we put them on our shoulders and our heads,” she recalled, “and we danced around the kitchen.”

But Alice also helped a lot of people in dire straits and rarely turned anyone down. “For some reason, if somebody asks me for something, I believe that they really need it — so I give it to them,” she said. “There are very few things I wouldn't give to people. So if somebody asked me for a job, I gave them a job — and especially if they really needed a job — like the people on parole or people who didn't have rent money.”

Now it's Alice who's struggling to pay the rent in the place she always dreamed of living. After her Western Massachusetts restaurant went under in the late 1970s, she traveled east to Provincetown.

As the story goes, Alice's life began in Provincetown. “My parents met here, and later on I was conceived right out at Long Point — or that's what they told me,” she said.

Alice grew up in Brooklyn and her family spent summers in Provincetown where her father ran a shop. As a kid, Alice fell in love with living on the water. “There are all these pictures of me happy, happy, happy just wearing a pair of underpants,” Alice recalled smiling. “I think I didn't wear a bathing suit until I was about 12. But that's the way it was here.”

When she moved back to Provincetown, Alice said she was burned out from running restaurants, so she decided to work behind-the-scenes as a prep cook at night and was able to fulfill another lifelong yearning during the day, which was to be an artist.

For decades Alice made ink drawings on paper and on rocks she found along the beach. She sold them from a little gallery shop in her home. But the income wasn't enough and she struggled to pay the mortgage. Ultimately, Alice said she had to sell her house. Then she moved in with a friend who eventually passed away.

But about two years ago — right after she hunted for and found a year-round rental — Alice was hospitalized with heart disease. She also suffers from the irreversible lung condition COPD and was diagnosed with emphysema from smoking decades ago.

After a year in the hospital and a nursing home, Alice is back in the little gray shingled cottage. But she can't afford to stay in it on her own. That's why friends Alice has gathered over the decades created a new GoFundMe campaign.

Organizer Dini Lamot was a member of the 1970s and '80s new wave band Human Sexual Response and remembers meeting “the Alice” in the 1990s.

“I was starstruck,” Lamot recalled, saying they hit it off because they were both hippies and givers. “I just would hear about all the stuff she did for all the people she took in, and just the food she made for everybody and her generosity. She took in a lot of wayward souls and helped them out.”

Now, Lamot lives in Sarasota and Portland, Maine with Windle Davis who was also in Human Sexual Response. The former bandmates have been life partners for 46 years.

Davis recalled getting to know Alice in the early '90s as AIDS was ravaging the gay community. Provincetown filled up with men from cities all over the country who said if they only had a year or two left to live, they wanted to do that in Provincetown.

Now, Lamot said, it's time to give back. “I'm just hoping that it'll touch a little spark in people's memory of the '60s — of 'Alice's Restaurant' — and they'll just give something to her,” Lamot said. “Even if it's 10 bucks.”

Alice Is Embarrassed, But Moved

Alice was humbled when she first heard about her friend's plan. “I'm still embarrassed by it. I've always come up with money and this time I didn't come up with anything,” she said, "And I'm not really able to work. I don't have a lot of stamina.”

Alice has lived in Provincetown for more than 40 years which, she said, helped her come to terms with her stardom.

She recalled how people would walk into her little gallery, see the "Alice's Restaurant Cookbook" and ask, “Are you Alice? The Alice?” When she said yes they'd regale her with stories about what they were doing in the '60s. Their memories — and sometimes even their nostalgic tears — made Alice realize it wasn't so bad to be that Alice. “All you need to do is say my name and people start to smile,” she said, “How can I resent that?”

Alice estimates she needs about $60,000 a year to stay in her cottage where she spends most of the day connected to an oxygen tank. She can't draw anymore because of the tremors in her hands. But Alice is still cooking in her kitchen. She loves to use plenty of herbs, spices, garlic and onions. And right around this time of the year, she still gets calls from radio stations asking her to introduce her buddy Arlo Guthrie's famous Thanksgiving Day song.