This is an exclusive song premiere, part of The ARTery's effort to highlight New England musicians. 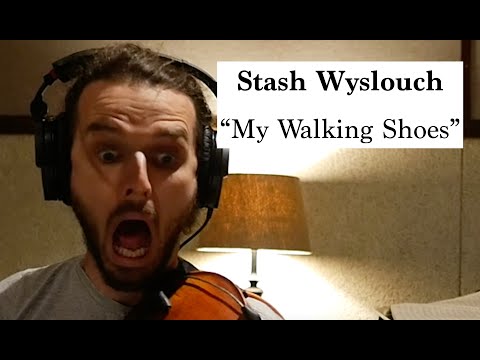 Stash Wyslouch’s version of Jimmy Martin’s 1961 song “My Walking Shoes” starts out as a pretty standard bluegrass tune: nimble flatpicked guitar, an insistent backbeat, close vocal harmonies. Then, suddenly, everything lurches sideways. Fiddle, guitar and bass converge in a zany ascending line before returning, just as suddenly, to the refrain. As the song careens onward, it is subjected to ever more whimsical interjections: a playful jazz solo, a frantically sped-up chorus, a loopy improvisational tangent that ends in a heavy metal riff. By the end, you’ll find you need to catch your breath, either from laughter or astonishment.

“My Walking Shoes” is the first track off Wyslouch’s forthcoming album “Stash Wyslouch Plays and Sings Bluegrass Vol. II.” Don’t let the “Vol. II” fool you — this is the guitarist and singer’s first foray into this particular experiment, in which he brings his impressive technical and imaginative abilities to bear on a collection of beloved old standards. Call it avant-absurdist bluegrass.

Most contemporary bluegrass players, concerned as they are with preserving the integrity of the tradition, are content to make only minor updates to the idiom. Wyslouch observes no such constraints. “How many traditional bluegrass albums are there where you heard, like, those same recycled riffs over and over again, those same licks?” he says. “The next generation, they can do it like 30 [beats per minute] faster. Great.” Wyslouch tries to approach bluegrass from completely new angles — upside down, sideways, an interdimensional vortex only accessible from within his own mind.

Wyslouch grew up in Lexington, Massachusetts and recently moved to LA after more than a decade in the Boston area. Throughout middle and high school he played guitar in a heavy metal band that featured an electric violin and once opened for the Dresden Dolls after winning a local battle of the bands. When he was 18, Wyslouch got hooked on acoustic music. He spent his years as a student at Berklee College of Music immersed in the local roots music scene and honing his improvisational chops.

In 2015, Wyslouch formed an ensemble called The Stash Band, which he billed as a mashup of metal and bluegrass. He points to influences like the jazz composer Anthony Braxton and the avant-garde icon John Cage, but metal, in a lot of ways, is the root of his exploratory ethos. “The tonal palette — the notes that you can choose from — is pretty open in metal,” he explains. “It doesn’t matter if it’s in the key or not — if it just sounds kind of riffy and catchy, it works.”

Though billed as a solo project, “Stash Wyslouch Plays and Sings Bluegrass Vol. II” reunites The Stash Band ensemble — drummer Sean Trischka, fiddler Duncan Wickel and bassist Max Ridley — and applies its lunatic virtuosity to some of the most recognizable tunes in the bluegrass repertoire. The material has a grounding effect on the group’s slapstick tendencies; it gives the listener something to hang onto in between frenetic flights of fancy. The result is at once an homage to and a deconstruction of bluegrass music. “I think of it as a reconstruction” of the form, Wyslouch says.

There’s an inherent silliness to Wyslouch’s experimentalism. “I like humor in music,” he says. “A lot of people get afraid of it because they think it’ll cheapen their 'thing.'" Still, his project is ultimately a serious one. He wants to create truly original music, a goal with its own particular pitfalls. He sometimes senses inauthenticity in the work of other avant-garde artists. “They end up holding back some of their truth, that would [otherwise] be expressed, because that wouldn't be considered original by other people,” Wyslouch says. As much as he wants to create something new, he mainly wants to make something that’s his own.