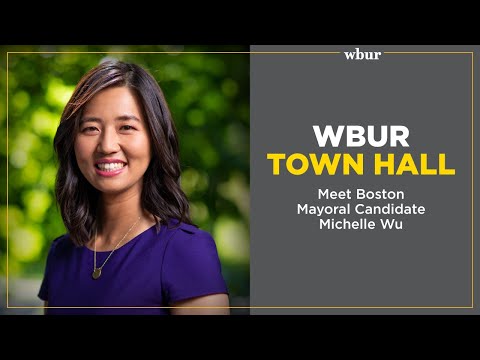 On a recent afternoon at Michelle Wu's campaign headquarters in Jamaica Plain, the candidate was on the run, chasing one of her two young sons around the office.

Wu said her son didn't go to school that morning due to "some issues and moods," so she and her husband split the day with him.

“We had popcorn spilled out all over the office, a cup thrown in a tantrum and lots of running around," Wu said.

In other words, life happens — even in the midst of a historic mayoral campaign. It's a reminder that whoever becomes Boston's next mayor next month will for the first time be a mother.

Until now, every elected mayor in Boston has been a white man. But in just a few weeks, Boston voters will face a choice of two city councilors — Wu and Annissa Essaibi George.

Wu, 36, grew up in Chicago — the daughter of Taiwanese immigrants. She was often the unofficial interpreter for her Chinese-speaking parents. And she never imagined that she would enter politics, let alone run for mayor of Boston.

Growing up in a Chinese family, Wu said she was discouraged from talking about herself in public or being confrontational. And she didn't have the traits she normally associated with politicians.

In 2003, Wu moved east to attend Harvard. And after she graduated, she began a journey that would eventually take her into politics.

Her mother suffered from late onset schizophrenia, which developed into a full blown mental health crisis. That compelled Wu to return to Chicago to help care for her ailing parent and her two younger sisters. She opened a small teahouse, but struggled to make it work. Then, she headed back to Massachusetts to attend Harvard Law School, this time with her family.

One of her sisters, for whom she was then serving as official guardian, attended the Eliot School, where Lydia Torres was the assistant principal. Torres recounted how Wu became actively involved in her sister’s education, even joining the city-wide parent council.

"I remember a lot of the parents would ask, 'When did she have this kid again?' " Torres recalled. "This was her sister and she became her guardian. She was very young and she knew how to be a parent at the young age."

While at Harvard, Wu studied contract law with Elizabeth Warren — who she said was "brilliant and terrifying."

Warren, who has endorsed Wu for mayor, recalled a bright student who sat in the front row, and who later worked on her first campaign for the Senate. Warren said back then, Wu was already focused on how to help working families.

Wu says her own experience, including struggling with her mother's mental health crisis, her sisters' schools and her own effort to start a small business propelled her into politics.

She said those experiences "burst the bubble on trying to stay away from politics and government."

"It just mattered so much, and so many other people in similar situations were struggling with that," Wu said.

After she graduated from law school in 2012, Wu married Conor Pewarski, who is now a Boston banker. She also made the leap into politics.

Wu won an at-large seat on the Boston City Council in 2013 — the same year Essaibi George launched her first race and lost. Wu became the first Asian American to serve on the Council, joining Ayanna Pressley, the first Black woman to serve on that body.

“That year we doubled the number of women serving on the council from one to two,” Wu said.

Wu was also the first Asian American to serve as council president. She won re-election to the council three times, and was the top vote-getter in the last two elections.

As a city councilor, she championed a number of progressive causes, including the fight against the short-term rental companies like Airbnb that housing advocates blame for driving up rents.

Mayor Marty Walsh had a plan to rein them in, but Wu pushed for a tougher one. Her fellow city councilor Lydia Edwards says Walsh pressured Wu to adopt his approach, and urged her to back down.

“And Michelle said, ‘No. You back down.' " Edwards recalled. "And there was a kind of back and forth of who’s going to blink. And she did all of that, in this small room, while holding her infant son.”

In the end, Walsh blinked first. Edwards said she learned that when necessary, Wu is "like a grenade: small, unassuming, and when pushed, extremely powerful.”

Her opponent, Essaibi George, calls it “pie in the sky” and unrealistic. Essaibi George, a life-long resident of Dorchester, also said it's worth pointing out that Wu grew up in Chicago.

That sentiment could resonate with some lifelong Boston residents, something Wu understands. She recalled that when she first ran for City Council eight years ago, voters often quizzed her about her background.

"People wanted to know where I grew up, where my mom lived, where I went to school," Wu said. "Kind of the typical 'what tribe of Boston do you belong to?' "

But in recent years, Wu says voters have been more focused on issues than where people went to high school.

“In the 2019 election cycle, I'm not sure anyone would know what neighborhood each of the city council candidates were from," Wu said. "It was much more about what changes are you going to bring? What communities will you represent?”

A WBUR poll last week found Wu leading Essaibi George by a wide margin across the city. As the Nov. 2 election draws near, Wu is counting on support from a city that is changing — with a growing population of newcomers, including younger voters immigrants.

Fewer than half of Boston residents were born in Massachusetts, according to Census data.

So Wu is in good company in the city she seeks to lead.