Pamela Daly was on vacation in New York City, when she paused to look up and admire the skyline. Suddenly, the whole world started tilting to the left.

“I actually thought maybe we were having an earthquake,” she recalled.

It wasn’t an earthquake, but it was a disaster for Daly.

One of the small, front wheels had fallen off her wheelchair. A passerby helped her put the wheel back on. But a few blocks away — in the middle of the road, in busy Manhattan — the wheel came off again, and Daly fell.

A broken wheelchair and, just like that, a broken hip.

Many wheelchair users have a story like this, Daly said, often more than one.

Researchers estimate that more than 50% of wheelchairs break down in a typical six-month period. One study found that among veterans the number is as high as 88%. When a chair breaks, it can take a long time to get it fixed. Experts put the average at two to four weeks, but stories of people waiting six months or longer for a wheelchair repair are common.

Experts pointed to several reasons why wheelchairs break down frequently and why fixing them takes time. Some attributed it to a lack of routine maintenance, others pointed to the sheer complexity of modern power wheelchairs. Repairs can also be delayed by everything from documentation required by insurance companies to a limited inventory of common parts.

For the roughly 5.5 million Americans using wheelchairs, this is more than an inconvenience. While waiting for repairs, people can be stranded at home, stuck in bed or forced to use a chair that doesn’t fit. When this happens, a person is at an increased risk of developing medical complications and being hospitalized, research suggests.

For Daly, the wheelchair breakdown was, ultimately, worse than the broken hip.

Without a working chair, she was stuck at her home in Charlestown. Daly, who was paralyzed in a car accident decades ago, missed work and struggled to get to the hospital so doctors could look at her hip.

She waited at home for more than a month for the repair to get approved by insurance, for the part to arrive and for the technician to come to her house.

For nearly 15 years, researcher Lynn Worobey has been collecting data on wheelchair breakdowns and repairs.

“The numbers are shocking,” said Worobey, a University of Pittsburgh assistant professor and a physical therapist at the university's medical center, UPMC Mercy. “I think that the scarier part is they're not new numbers. It’s been this way for a while.”

Worobey often tries to get others to empathize by comparing wheelchairs to cars. “If 50% of people had their car break down in a six-month period, they'd probably be pretty upset,” she said.

"If 50% of people had their car break down in a six-month period, they'd probably be pretty upset."

But, she quickly added, a wheelchair is a lot more than a car.

Beyond being a means of mobility, chairs are often customized to meet a person’s medical needs and abilities. For example, some chairs can be controlled by eye movements if a person can’t use other body parts to steer. Chairs can also be designed and fitted to relieve pressure on certain parts of the body so that painful — and in rare cases fatal — sores, called pressure ulcers, don’t develop.

In a study of wheelchair users with spinal cord injuries, 28% of people who experienced breakdowns over a six-month period reported at least one adverse consequence, Worobey found, such as getting stranded. The same study revealed people of color and low-income individuals experienced more frequent wheelchair problems.

Murshid Buwembo can barely count the number of times his wheelchair has broken down. But the most recent, he said, was a flat tire at work at Home Depot in Boston. Colleagues and friends tried to help him fix it but to no avail.

Buwembo missed three days of work. He estimates, all told, the ordeal cost him $700. That’s a lot for Buwembo, who’s a polio survivor and an asylum seeker from Uganda.

“I had to skip buying groceries,” he recalled. “I was even not eating.”

‘It Makes No Sense Whatsoever’

Mark Schmeler, an associate professor in the University of Pittsburgh’s Department of Rehabilitation Science and Technology, lays much of the blame for frequent wheelchair breakdowns on Medicare. With more than 60 million older and disabled beneficiaries, Medicare is among the largest health insurance providers in the country. Plus, many private health insurers adopt policies similar to those Medicare has established.

“One of the biggest culprits [of wheelchair breakdowns],” Schmeler said, “is that Medicare doesn't have an allowance to do preventative maintenance.”

For a car, there are oil changes. For a bike, there are tune ups. For a wheelchair, there’s nothing.

The Medicare Benefit Policies Manual states that wheelchair owners are expected to perform routine maintenance. The document says owners “normally” receive operating manuals that can serve as a guide: “It is reasonable to expect that beneficiaries will perform this maintenance.”

To Schmeler, this approach allows preventable issues to progress to the point where chairs unexpectedly become inoperable — or dangerous.

Another problem, he said, is Medicare will only cover a wheelchair that’s primarily used in the home. As a result, wheelchairs often don’t have a good motor, high-quality suspension or strong batteries, Schmeler said.

The Centers for Medicare & Medicaid Services (CMS) declined multiple interview requests, but said in a statement that this provision can be traced to the Social Security Act. CMS said patients are allowed to use their wheelchairs outside the home, but Medicare will not cover scooters or wheelchairs used exclusively for outings.

According to Schmeler, Medicare started interpreting the law narrowly in the early 2000s after TV ads began popping up.

“Attention Medicare and insurance beneficiaries,” said an announcer in one ad from the now-defunct The SCOOTER Store. “You may qualify for a power chair or scooter at little to no cost to you.” 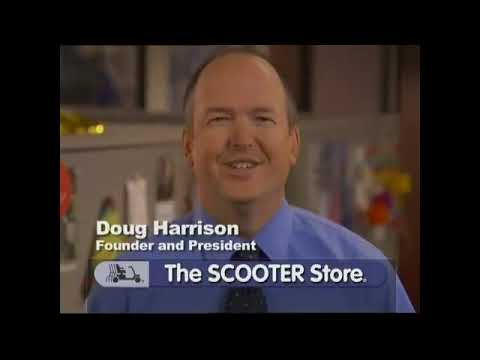 In part through ads like this, scammers convinced people to get scooters and wheelchairs on Medicare’s dime. About a billion dollars later, “Medicare had to do something pretty drastic,” Schmeler said.

So, it tightened the rules, insisting the chairs it covered primarily be used in the home.

“It makes no sense whatsoever,” Schmeler said. “But they had to do something.”

‘That's On Back Order’

In 2016, the Disability Law Center (DLC) of Massachusetts hosted a conference with wheelchair manufacturers and dealers, health insurers, and wheelchair users and advocates. There was near-universal agreement that the time it takes to repair a wheelchair is unacceptably long.

Their task was to find a solution. DLC said the effort failed. Then and now, each stakeholder pointed to a different reason for the lengthy waits.

Rick Glassman, director of advocacy at DLC, said one major issue was the shrinking number of companies that sell wheelchairs. “There's too much market consolidation, and there's no consumer power,” he said.

Over the past few decades, the number of dealers has dwindled to just a handful in New England, he said, and two national providers — Numotion and National Seating and Mobility — dominate the market. Wheelchair users are stuck with few choices, Glassman said, and “very poor customer service.”

From the dealer’s perspective, it’s impossible to make money fixing chairs, said UPitt’s Schmeler, who studies the wheelchair repair market. In a recent survey, he found over 50% of companies reported being compensated for less than half the time it takes to complete repairs.

“You can't even break even,” he said. “It's a loss leader in most companies — actually in all companies.”

Kim Damato’s family owns Rehabilitation Equipment Associates, one of the few independent dealers still open in New England. She acknowledged “consumers don't have a lot of choices” and that it’s hard to make money doing repairs. But, she said, she feels hamstrung by manufacturing problems. She described seeing shoddy wheelchair construction and long delays to get replacement parts.

“A guy just called up, and he said his joystick isn't working,” Damato said. “We called the manufacturer, and they said that's on back order until June.”

The man will have to wait at least three months for a repair. In the meantime, Damato will do her best to fit him with a loaner chair from a bank of about 40 her family has stockpiled.

"A guy just called up, and he said his joystick isn't working. We called the manufacturer, and they said that's on back order until June."

Charles Sargeant, chief revenue cycle officer for National Seating & Mobility, said health insurers exacerbate the problem by having slightly different rules about coverage, and many require a doctor’s approval before repairs can start.

Sargeant said getting both a doctor’s sign off and a health insurer’s blessing can be a slow and frustrating process.

“Ninety-nine plus percent of the time, they're going to give the authorization, but they're keeping that archaic process in place out of fear that there is going to be fraud or over-utilization,” he said.

When insurers do not require authorization, a repair typically takes a week, Sargeant estimated, but when insurers mandate prior authorization, it takes closer to 50 days. He said he hopes to develop an industry standard for documentation that would catch fraud while minimizing wait times.

Blue Cross Blue Shield said in a statement that “to ensure our members are getting the highest quality service at an affordable cost, we review repair requests to ensure that they are necessary and appropriate.”

Living In ‘Fear and Trepidation’

Ellen Leigh was outside her apartment building in Arlington with a friend in April 2018, when her wheelchair brakes suddenly gave out.

“I went rolling. I was out of control,” she said. “It was really scary.”

She said it took three years to fix the problem. Leigh had another chair she could use, but it didn’t do everything she needed. Sometimes she had to use her broken wheelchair, which she did with “fear and trepidation.”

"You can get things overnight from Amazon, but you have to wait months for a simple part for a wheelchair."

Whether wheelchair breakdown and repair issues are due to insurance policies, chair quality or logistical delays, she said it’s the users who are stuck living with the consequences.

“There’s got to be a better way,” Leigh said. “You can get things overnight from Amazon, but you have to wait months for a simple part for a wheelchair.”

Until things change, she added, wheelchair users go through life fearing that a loose bolt or a faulty motor could become a devastating disruption.