Plenty of agreement, with flashes of future campaign clashes.

That was the theme as two of the major candidates for Massachusetts governor shared their plans to address climate change during a live forum hosted Wednesday at WBUR's CitySpace.

The two Republican candidates were invited to participate in the forum. Former state Rep. Geoff Diehl declined and businessman Chris Doughty did not respond to several requests to join. 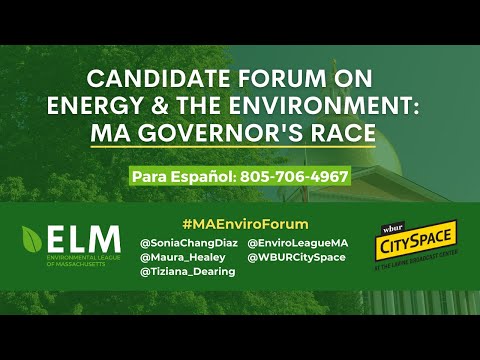 The conversation started with a focus on the state's big-picture goal: reduce greenhouse gasses to 50% below 1990 levels by 2030, and achieve “net zero” emissions by midcentury. Both Healey and Chang-Díaz said they’d put the full power of the state government toward reaching the goal, and that they’d center equity and environmental justice on the way there.

"From my perspective it is about, big time, revving up renewables," Healey said, pointing to energy sources like wind in particular. Part of that would be appointing a climate chief to work across state departments "so every agency owns" the goals and responsibility of addressing climate change.

She also said meeting the state's emissions goals "is an opportunity for jobs, it is an opportunity to make us the climate capital of the United States and the world when you think about innovation.”

Chang-Díaz led off saying she would “bring an enduring and unflinching sense of urgency to this work.” If tackling climate change by greening transportation and buildings was easy, “they would have been done by now,” she said.

Policy-wise, Chang-Díaz said she would do whatever she could to stop new fossil fuel infrastructure from being built.

"First thing, when you are in a hole … you've got to stop digging," she said.

Chang-Díaz also touted her transportation platform. She said she would advocate for the long-proposed east-west rail service across the state, as well as making all public transit electric and fare-free.

Mass. has a chance to seize the moment, candidates say

Pressed on what unique advantages Massachusetts has when it comes to creating opportunity from crisis, both candidates noted the state has long been a leader in technology and innovation.

Massachusetts has an opportunity to not only chart a political and economic course toward a greener future, but also “export” a successful strategy nationwide, Chang-Díaz said.

"Here in Massachusetts, our only limiting factor is political will and political courage to go fast and to go more urgent and to go bigger on climate change,” she said.

“There is no state in the country that has the opportunity that we have right now with respect to climate and our clean energy economy,” she said. Massachusetts could be “the offshore [wind] capital of the United States. And that's incredibly exciting. Think about the great paying jobs that come with that.”

While the candidates agreed broadly on policy, there was some sparring when it came to campaign finances. Chang-Díaz pledged she would not accept donations from fossil-fuel sources and pressed Healey to do the same.

Chang-Díaz said Healey has collected about $50,000 in fossil fuel-based donations over the years, though she did not cite a source for that figure. Healey pushed back, saying she wasn't sure what donations Chang-Díaz was referring to, and pointed to her high-profile fights with oil companies as evidence of her independence.

Campaign finance reports show that Healey received money from people who worked for several utility companies including Avangrid, National Grid and Eversource. Many of these companies also have clean energy projects.

A shared commitment to environmental justice

At multiple times throughout the evening, the candidates said equity and environmental justice would be central to their approach for tackling climate change.

Healey agreed, saying the coming wave of green jobs must be available to environmental justice communities.

“This is what is really exciting to me, if you think about economic mobility and prosperity — particularly for Black and brown residents that have been left behind — we have a bunch of jobs coming our way that are absolutely going to be essential to getting us where we need to be,” she said.

Both candidates said they’d support changing the composition of state energy agencies like the Department of Public Utilities so that they included more residents as members, or gave the public more of a voice in whether projects get approved.

The conversation, however, turned contentious when Chang-Díaz said Healey had not backed up her words in support of environmental justice and equity with action.

“I respect the hell out of your work on the national level. But standing up for racial equity at every turn means more than doing it when it's against Donald Trump or against ExxonMobil,” Chang-Díaz said. “The truth is there are many moments that people of color needed you to be there to center racial equity, when you did not.”

Healey pushed back, pointing to her work in the Merrimack Valley in the wake of gas explosions caused by overcharged lines controlled by Columbia Gas.

"As we speak, my team, who negotiated and went after Columbia Gas … they are working on the distribution of funds that are going directly into low-income homes," she said.

One final area where the two candidates differed was on how they would, or would not, work with other New England states to reduce emissions or protect the environment.

“We cannot solve many of our most pressing climate issues alone,” Healey said. “We have to work regionally and with other New England states,” something she added she’s had experience doing as attorney general.

“I know things fell apart," Healey said. "But we're in a different place than we were a year or two or three ago, and we have an opportunity to revisit that. And I promise as governor, I will bring the urgency to that and the commitment to turn to drive a regional solution.”

Chang-Díaz applauded efforts to work across state lines, but said “we should not tie our fates” to the whims of the federal government or other states, because Massachusetts has all it needs to establish its own green economy.

"We should not be putting Massachusetts at the end of a very long extension cord that runs through other states and, you know, even depends on other countries," she said, referring to a stalled plan to bring hydroelectric power from Canada to Massachusetts.

"In order to meet our climate change goals, we have to have a plan that is also self-sufficient and that creates opportunities for economic development right here in Massachusetts,” she added.

This article was originally published on April 27, 2022.