I was 7 years old in the summer of 1982, when my family went to see “E.T. the Extra-Terrestrial” at what I’m pretty sure was the Showcase Woburn multiplex on Rt. 128. My father had sworn off the General Cinema in Burlington a few weeks before, after he and I saw “Star Trek II: The Wrath of Khan” and the theater had the temerity to play a Jordan’s Furniture radio spot after the lights went down. Paying good money to be a captive audience for commercials was beyond the pale, my dad let the manager know in no uncertain terms. (In retrospect, we didn't know how good we had it.) Anyway, our screening of “E.T.” was full that afternoon, as most showings of the movie had been for most of the summer. Steven Spielberg’s tear-jerking tale of boy and his alien friend had become more than just a box office phenomenon, it was a cross-generational, cultural juggernaut the likes of which wouldn’t be seen again until “Titanic” 15 years later. Unfortunately, this meant we’d have to sit next to strangers.

As the older brother, I was deputized to be the buffer between my little sister and the empty seat beside us, which shortly before showtime became occupied by a burly, bearded man in a cutoff denim vest who had arrived at the theater alone. I was terrified. To my 7-year-old eyes, he looked like a Hell’s Angel, whatever those were. I gripped the armrest and stared straight ahead at the screen, trying to be brave. But after a while, I couldn’t help noticing that this large, intimidating gentleman was sniffling a little bit. As the movie wore on, he began to weep, finally graduating to full, heaving bodily sobs for the film’s heartbreaking farewell scene in the forest. “E.T.” had made this second-grader and future film critic very sad, but the scary, hairy giant sitting next to me was inconsolable.

“E.T.” is one of the purest and most emotionally direct of all American movies, with not a whit of adult condescension nor any self-protecting irony.

Spielberg’s masterpiece is being rereleased in IMAX for its 40th anniversary, and nearly every friend I’ve spoken to about it has had the same reaction: initial delight at the prospect of revisiting a favorite film, followed by an ashen-faced admission to the effect of, “I’m not sure I’ll be able to handle that.” “E.T.” is one of the purest and most emotionally direct of all American movies, with not a whit of adult condescension nor any self-protecting irony. Spielberg’s brilliantly subjective camerawork forces even the most jaded and cynical viewers back into the perspective of a child, which might be why it hits grown-ups so much harder than kids. Shot on a (relative) shoestring between “Indiana Jones” pictures, it’s the filmmaker’s most modestly scaled work, grounding interstellar wonders in the kind of quotidian suburban rituals that made Steven Spielberg the Norman Rockwell of the 1980s. He conjured an Americana of cluttered kitchens and messy rooms, sprawling housing developments that were paradises for riding bikes and playing Dungeons & Dragons after your bedtime and ordering pizza without Mom’s permission.

Henry Thomas’ 11-year-old Elliott is the middle child, too young to be anything but the butt of jokes to his big brother Michael’s friends and too old to want to hang with his kid sister Gertie (Drew Barrymore, stealing the movie precisely because she’s not playing precocious.) It’s Elliott who feels their dad’s absence the deepest, with details of a recent divorce strewn about in hushed conversations and whispered asides. Thomas breaks your heart from the get-go because his emotions are so tender and close to the surface. He never feels like a child actor performing for the camera. He’s a lonely little boy who needs a friend, so it’s fortuitous that this waddling, pot-bellied creature with the oversized, wizened eyes finds its way into Elliott’s yard.

What’s remarkable about “E.T.” is how little is explained, and how little needs to be.

“E.T.” is photographed almost entirely from a child’s-eye point-of-view, with the camera seldom more than four feet off the floor and adults all either seen in silhouette or shot from the waist down like Charlie Brown’s teachers for the first three-quarters of the film. The lone exception is Elliott’s mom Mary, played by the cherubic Dee Wallace like she’s a great big kid herself. (One of my favorite pieces of acting in the whole film is how hard she’s trying not to laugh while admonishing Elliott for calling his brother “penis breath.”)

What’s remarkable about “E.T.” is how little is explained, and how little needs to be. Spielberg says he told the idea to “The Black Stallion” screenwriter Melissa Mathison on the Tunisia set of “Raiders of the Lost Ark,” where she was hanging out with future husband Harrison Ford. Six weeks later she’d fleshed out a first draft, which is what they wound up shooting the following year. Mathison’s screenplay remains a miracle of economy — there’s no exposition at all. The boy’s physiological bond with the creature is established entirely through cross-cutting and performance choices, like the afternoon when E.T. knocks back a few beers while watching “The Quiet Man” on TV and Elliott starts acting drunk and imitating John Wayne. One can easily imagine today’s studio executives demanding that somebody stop the movie to tell us exactly why Gertie’s geranium wilts and blossoms according to the health of our visiting friend. Spielberg and Mathison knew they only had to show it. 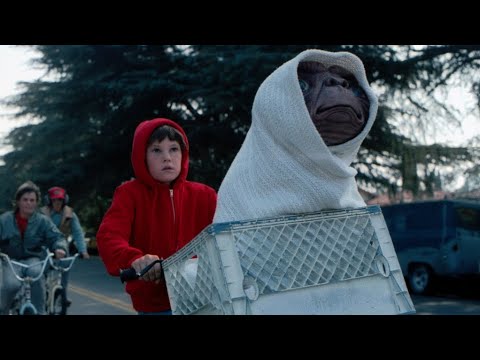 The whole movie works like that, existing almost entirely on a primal, emotive level. These kids’ chaotic house — how nice to remember homes in movies that looked like people actually lived in them — is shot by cinematographer Allen Daviau with a richly reassuring, golden glow that’s abruptly extinguished when the government scientists arrive in their Hazmat suits, wrapping these formerly warm rooms in cold plastic and hard white light. It's the scariest scene in the movie because it registers in your mind as a violation, the kids’ sacred space invaded by these imposing automatons in their indistinguishable masks. Likewise, bicycles have always been a means of liberation for children — they’re how you escape geographical and adult-imposed constraints before you’re old enough to drive — so it makes perfect emotional sense that these bikes can fly. We don’t need to know how.

The final scenes of “E.T.” work more like an opera than a movie, soaring somewhere beyond words on the exultant strains of John Williams’ score. But during post-production, the composer was having trouble conforming his music to Spielberg’s cutting patterns. In an extremely uncommon move, the director unlocked the picture and asked Williams to record the score first without using his footage as a guide. Spielberg then re-edited the ending according to Williams’ rhythms, allowing the music to take the lead and carry the film off into the starry evening sky. Like a lot of my friends, I’m a little frightened that this might be too much for me to handle on an enormous IMAX screen. But maybe it’s my turn to be the big, blubbering beardo some kid in my row will be writing about 40 years from now.

"E.T. the Extra-Terrestrial" returns to IMAX theaters on Friday, Aug. 12.