A UMass Dartmouth police officer gave a student a ride in his cruiser to her residence hall late one night in October 2010.

When they arrived, Officer David Laudon gave the 20-year-old a hug and grabbed her breast, she told university police, according to a department report. Laudon later texted her: "Those boots make me hot, and I want to go to bed with you."

That incident marked the beginning of a pattern of harassment, she told police, including alleged groping and unwanted texts and phone calls from him.

Laudon resigned after his department began an investigation, but the complaints didn’t end his career in law enforcement.

Instead, he found a job three years later with another police department in Blackstone, where he still works. Unaware of the allegations at UMass Dartmouth, Blackstone assigned Laudon to investigate sexual assaults and work with students in the region’s public school system.

Laudon isn’t the only officer to get a second chance after a scandal over the last decade.

WBUR found more than a dozen current Massachusetts police officers who were previously fired or resigned from another department after a misconduct investigation.

That includes a police officer in Erving who was fired from the Massachusetts State Police after he was caught repeatedly driving drunk, a Rehoboth officer who left the Seekonk force after he was accused of domestic violence and a Berlin police officer who lost his job in nearby Shrewsbury after allegedly posting vulgar messages on Facebook under someone else’s name.

“We call it the ‘officer shuffle,’ ” said Philip Stinson, a professor at Bowling Green State University who studies police crime across the United States.

Stinson and other experts say there are several reasons why ousted officers frequently find new jobs. There’s no national system for licensing officers, so police barred from working in one state can sometimes find work over the border. Background checks don’t catch everything. And some departments are willing to give officers another shot.

Massachusetts is in the process of setting up a statewide system to license officers and track officer misconduct, potentially making it harder for problem officers to get new jobs in the future. But a planned public database of officers disciplined for wrongdoing doesn’t exist yet. That makes it harder for departments to research an officer’s past.

Blackstone town administrator Dori Vecchio said she didn’t even know about Laudon’s problems at UMass Dartmouth until contacted by a WBUR reporter. She vowed to investigate.

“I am concerned with the accusations,” Vecchio wrote in an email. “I take them very seriously, and I want to look into them myself.”

The issue isn’t limited to Massachusetts. A 2020 study in the Yale Law Journal found 3% of active police officers in Florida had previously been fired by another department. And in Ohio, journalists discovered that the police officer who in 2014 fatally shot Tamir Rice — a 12-year-old boy with a toy gun — had left a previous job after he was found "unfit for duty."

But Stinson, the Bowling Green researcher, said it may be especially easy for officers to slip through the cracks in states such as Massachusetts that have hundreds of tiny police departments and weak public records laws.

Until two years ago, termination letters and other disciplinary information were generally not public in Massachusetts. A separate state law still mandates that police keep secret all reports and arrests for sexual and domestic violence, including those allegedly committed by police officers, though law enforcement officers can access the information. All the secrecy makes it more likely that officers accused of wrongdoing won’t make the news.

Until recently, Massachusetts was also one of the few states that didn’t license or certify police officers. That meant no one tracked officers who were fired or had the power to block them from going to a different department.

State lawmakers ultimately established a certification commission after protests against police brutality erupted across the country following the death of George Floyd at the hands of police in 2020.

But the Massachusetts Peace Officer Standards and Training Commission has yet to release its list of officers who have gotten into trouble and refused to provide numbers on how many ousted officers are now working for new departments.

In his first four months on the job in 2012, Paicos drove the wrong way down Memorial Drive in Cambridge while drunk; totaled his Nissan Murano while intoxicated on the Sagamore Bridge in Bourne; was caught driving 85 miles per hour on Route 24 in West Bridgewater while smelling of alcohol; and was spotted drinking beer in the street next to his police cruiser, with empty cans strewn on the ground, according to a state police investigation.

Paicos wasn’t arrested or charged with a crime for any of the incidents, but the state police fired him in 2012. He unsuccessfully sued the department to get his job back, arguing his reliance on alcohol was the result of a disability — post-traumatic stress disorder from his military service in Iraq. Both his firing and the incident on Memorial Drive were widely reported at the time.

Still, police in the tiny town of Erving in western Massachusetts hired him anyway in January 2016. Town officials declined to say why the police hired Paicos despite his record with the state police. Then, two years later, he got in trouble again.

In May 2018, driving on a freeway outside Seattle, a Washington state trooper spotted Paicos drifting between lanes late at night. He failed portions of a field sobriety test and registered a blood alcohol level of .15, nearly twice the legal limit. 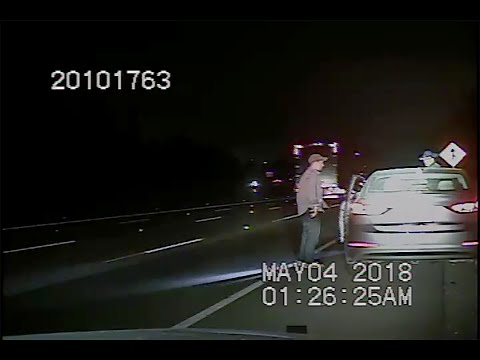 Paicos tried to talk his way out. When the trooper approached the car, Paicos opened his wallet to show a police badge. Dashcam video shows he pleaded with Trooper Howard Clark to take him into protective custody, rather than arresting him on criminal charges, just as police in Massachusetts decided not to charge him each time he was caught here driving under the influence.

“Trooper, this is my life. My entire life,” he said, hand-cuffed in the back seat of the squad car. “I just wish you would take that into consideration.”

Clark told Paicos he was going to treat him like anyone else, despite the fact that he was a police officer in Massachusetts.

“You guys might have a different tradition,” Clark said. “I don’t know, but it’s not up to me.”

King County court records in Seattle show a judge agreed to dismiss the criminal charges if Paicos successfully completed a two-year treatment program, which he did.

Erving officials declined to say how they learned about the arrest just outside Seattle. But the police chief later told the town’s select board that Paicos was “not forthcoming in reporting the incident” and deceptive when questioned. The town suspended Paicos in 2018 for five days.

Still, Erving’s select board voted unanimously last year to promote Paicos to sergeant. Select Chair Jacob Smith said at the meeting that he had “no concerns” about the promotion.

Town officials refused to explain why they promoted Paicos after the arrest, despite his history of drunk driving. Paicos did not return requests for comment.

In southern Massachusetts, the small town of Blackstone also hired an officer with a problematic past: Laudon, the officer who resigned from UMass Dartmouth after he was accused of groping and sexually harassing a college student in 2010.

After WBUR provided Blackstone with copies of the UMass Dartmouth allegations, the town removed Laudon from his post as a school resource officer at the Blackstone-Millville Regional School District and launched an investigation, said Vecchio, the town administrator.

Laudon remains on the police force, and the department's website still lists him as one of the investigators who handles sexual assault reports. He did not return requests for comment.

Laudon also serves as vice president on the board of the Blackstone Valley Boys & Girls Club, according to a filing this year with the Secretary of State's office. The club did not respond to requests for comment.

Many police and union officials argued for years there was no need for the state to license police officers because police would never knowingly hire a police officer who had been let go for misconduct.

“That would never happen,” said Lancaster Police Chief Edwin Burgwinkel at a legislative hearing in 2016, according to a report by State House News Service at the time.

In a recent interview, Burgwinkel said he was surprised to hear about the officers who landed new jobs.

“It should not happen," Burgwinkel said. If someone is fired, “there is no way that that officer should be working in another community.”

The new state licensing commission could make it harder for such officers to remain in law enforcement in the future. Officers now need state certification to work anywhere in Massachusetts. And the commission has the power to pull an officer’s license if they commit a severe offense.

"They can no longer simply erase an action by resigning."

The Massachusetts Peace Officer Standards and Training Commission’s executive director, Enrique Zuniga, pointed to new rules that require police departments to investigate misconduct allegations and report their findings to the commission — even if the officers agree to retire or resign.

“They can no longer simply erase an action by resigning,” Zuniga said.

But it’s unclear how the commission will handle cases where disgraced officers have already found jobs at new departments. And he declined to comment on any specific cases.

“What I can guarantee you is that we will have a process — we're in the middle of that — and we'll look at them as intended,” he said.

In the meantime, the officers in Blackstone and Erving remain on duty.