When Salvador Perez ended the 12-inning wild card game against the Oakland A's with a game-winning single, Kauffman Stadium exploded. The Royals had seven stolen bases in that game.

'That's What Speed Do'

[sidebar title="A Wild(-Card) World Series" width="630" align="right"] Last week ESPN's Tim Kurkjian previewed the Fall Classic. [/sidebar]"Letting them do what they do best," Yost exaplined. "I don’t think I've — and this might shock some people — I don’t think I put on a steal sign all year. All of our running is green light stuff."

That means the runners on base have the "green light" to run whenever they think they can successfully swipe a bag.

Dyson was promoted to the big leagues four years ago as a 50th round draft choice from a junior college in Mississippi. He has made an impact on the bases, stealing 36 in the regular season. Dyson steadfastly believes that good baserunning wins ballgames, and he has a catchy expression to convey that idea:

"I’m proud of ‘em," said Matt Alexander, a former major league speedster who helped the Pittsburgh Pirates win the 1979 World Series. He has been closely observing the Royals this postseason. "They’re doing good. I see a lot of speed. They’re using their speed the right way."

Alexander, better known as Scat, also holds the record for most career stolen bases by a pinch runner with 91. He especially likes Gore.

"I feel he could break my record that I hold right now in the major leagues and I've been having that record for 35 or 36 years," Alexander said. "He can probably steal a lot of bases because I watched him on TV and I can see that he’s really trying to key on certain things about the pitcher. He’s quick. You've got be quick. You have to have good footwork."

Gore has not gotten many at at-bats lately, but he knows why he’s with the team.

"Right now my speed is what I’m focusing on right now, but I’m always going to swing the bat a little bit," the soft-spoken Gore said.

Dyson has made more trips to the plate this postseason. He admitted that he’d like to do more one day than just run the bases.

"I’m willing to do anything the team wants me to do right now," Dyson said. "We’re not going to break up a good thing we've got going right now. I just got to worry about next year when it happens, but yes, I would love an everyday job. I don’t want to back up anymore."

A History Of Pinch-Running

The history of the pinch-running specialist dates all the way back to the 1960s when the A's were located in Kansas City and owned by Charlie Finley. The first was Allan Lewis, whose official position was outfielder. But “The Panamanian Express” was used mainly to run the bases. Then, track star Herb Washington was signed by the A’s in the early 1970s after their move to Oakland. He’s the only player whose baseball card reads “pinch runner” on his position label.

In 1973, Matt Alexander came up to the big leagues with the Chicago Cubs and was traded to the A's as a replacement for Washington, who’s infamous for getting picked off of first base in the 1974 World Series. 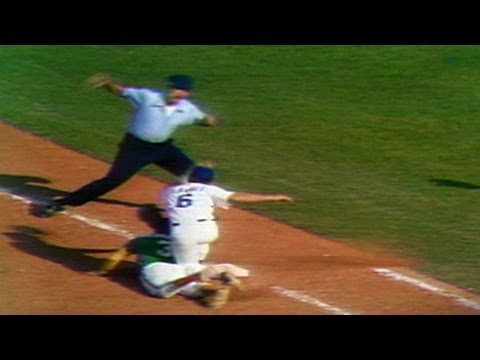 "He didn't have that baseball instinct because he never played the game," Alexander said. "He knew how to run a 100-yard dash.  But he made some mistakes and I think that’s the reason why they went further to try to get a player that knows how to steal and also knows how to play a position."

To repeat Dyson’s expression: That’s what speed do.